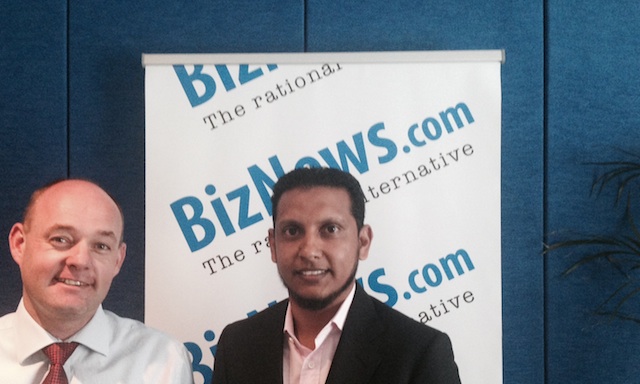 Like a desert trekker who suddenly discovers an oasis, after years of starvation South Africans have over-reacted to a glut of broadband. In this interview with DFA’s Reshaad Sha and Vox’s Jacques du Toit, the case is made for a more sensible approach to infrastructure; to a policy of promoting open access rather than the free-for-all which has led to massive overinvestment. – AH

ALEC HOGG: The South African Telecommunications landscape has changed dramatically in this country since 1994. It’s hardly recognisable, but there is still a long way to go, one feels. Joining us in the studio to discuss the challenges that are being faced by the economy on the need for open access and consolidation perhaps in the telecoms market, is Reshaad Sha, Chief Strategy Officer at Dark Fibre Africa, and Jacques du Toit, who is the CEO of Vox Telecom. Reshaad, I was reading some of your research and it is quite extraordinary the way the market has transformed since 1994. In 1994, we were starved of bandwidth, and perhaps we’ve got too much now.

RESHAAD SHA: Well, it is unrecognisable. I wouldn’t say too much, I mean of course as a fibre company we are always going to say, “There is never too much.” If you think about where we were in 1994, to where we are today, I think we had just about 560 mega bits per second, of undersea capacity. Which is basically, one DVD, downloading that in about a minute or two. Today, we have the equivalent of 11.4 terabits per second, undersea capacity that will allow you to do about 304 DVDs in about one second.  So it is a big shift, just on the bandwidth coming into the Continent and, specifically South Africa. If you think of the demand for that bandwidth, where’s it coming from. I think we probably had 60 000 mobile subscribers in 1994. Today we have close to 60 million mobile subscribers. We have a smaller number of businesses than we had then, demanding internet connectivity than we have today. Today I think it is just over 700 000 plus VAT registered businesses alone and each and every one of those business have a need, in some way or form, of connectivity.

ALEC HOGG: The problem with all of this, I guess, is that you can waste a lot of it, if there isn’t cohesive strategy. We know when Yunis Carrim was the Communications Minister, although lamentably for a very short period of time, he seemed to be pulling thing together quite well.

RESHAAD SHA: Yes, in fact during his term we saw the South Africa Connect, which is the National Broadband Strategy get published. While it is a good document and it talks a lot about where our targets and where we should be going as a country, it was a little bit light on execution. It is a strategy document, we’re not supposed to talk about execution in it, but that was 12 months ago. I have not seen the execution plan yet.

ALEC HOGG: You should have been here with Ketso Gordhan, earlier in the week, where he was talking about the National Development Plan, in a similar vein. We’ve got a wonderful plan but not much execution. Jacques du Toit – That’s what you’re about at Vox: highly innovative, always looking for new opportunities. How are you taking advantage of this glut of bandwidth?

JACQUES DU TOIT: I think the advantage is the fact we are in a phenomenally deflationary environment. Voice coming down at a rate of about 13 to 14 percent a year, data and internet access is about 20 percent a year. Ultimately data we believe will be free. It will be packaged just in different ways but what’s happening is it is lowering the barrier to entry.

ALEC HOGG: Data will be free?

ALEC HOGG: How is that possible?

JACQUES DU TOIT: If you are paying for applications, I think about ten to 15 years ago, you paid R140 per meg for broadband services. Today you pay around R4 a meg, that’s on its way down. The benefit we’re seeing is…

ALEC HOGG: Sorry, just help us through there, R4 per meg for what?

ALEC HOGG: But when I download a meg it doesn’t cost me four-Rand.

JACQUES DU TOIT: No, but it’s been bundled in packages. There’s downtime. There’s dead time on the network that people need to get rid of, so you basically package it as a bundle service and that’s the difference between an uncapped and a capped service, for argument sake. The point I’m trying to make, is with lower cost and with the massive deflation we’re facing, we are giving access to internet and voice services to more and more people in South Africa.

ALEC HOGG: But from your side, Reshaad, your strategy is to put in the plumbing and then get people to leverage off the pipes, but it seems like everybody wants to be putting in their own pipes.

RESHAAD SHA: Yes, that’s the interesting one and I think that is where the biggest amount of capital gets wasted is duplication of this fibre network that’s been built and the optimal use of that limited capital that we have in the market should be directed in a way that actually gets to a larger footprint, duplication on same street.

ALEC HOGG: How do you do that in a competitive environment?

RESHAAD SHA: Well, open access is a good principle that allows for a single network to be built and to be shared amongst service providers. But sometimes individual service providers find a different way of doing it and justifying why they need to build a specific piece of network. You are going to get some amount of duplication but when Government duplicates, together with the private sector, and then you have, ultimately an absolute wastage.

ALEC HOGG: Jacques, isn’t this good for you guys though because you can play one off against the other?

JACQUES DU TOIT:   Absolutely, the success of Vox, for the last ten years, have been to be agnostic: we will go to a customer and give him a choice of products that’s on offer. So we will deliver the same service but the provider or the hardware, in the backend – it is up to him to choose.

ALEC HOGG: How do you answer what Reshaad has just said now?

JACQUES DU TOIT: We’ve embraced the open access environment. We don’t believe that what the incumbents are doing, this vertical integration, is for the best of South Africa. Open access – let’s put the infrastructure down and get the service providers to share that access. We will have quicker penetration and we will have cheaper penetration.

ALEC HOGG: But you said earlier that you’re able to play one against the other. If you go to MTN, or Vodacom or Dark Fibre Africa perhaps in that case and get a better deal from each of them. So surely open access won’t be good for you.

JACQUES DU TOIT: Open access allows us to share the cost and, in terms of duplicating those costs, we can actually expand the network, so that is what DFA does. They say, “Let’s put the network down. Open it up to anybody, so we can extend that network faster.”

ALEC HOGG: What are the chances of that actually happening, if MTN, Neotel, and Vodacom and Telkom have already put in their own fibre, why would they come and work with you Reshaad?

RESHAAD SHA: Well for the mobile operators, specifically, remember they started building their fibre networks probably around the same time as DFA did. However, what we did was we built in a way that allowed them to come on board. They are great customers of ours today but there are some parts of their network that they’ve built anyway. So there will be some level of duplication but not a significant amount if you take the mobile operators versus the likes of a DFA. It also means that same duplication and maybe it is coming from Neotel or even a municipality, who built their own network.

ALEC HOGG: We spoke about that last time, with Pietermaritzburg wanting to do their own network and you guys won that case. Have you have other instances of this, where the State is wanting to duplicate what the private sector, in this case yourselves, are doing?

RESHAAD SHA: I wouldn’t say the State itself but some Municipal networks have been built out in the country and those have been duplicated, in terms of the footprint that we built out. One great example comes to mind is the City of Johannesburg. There’s a network that has been built out very closely duplicating what we’ve built. It hasn’t changed the pricing in the market at all, for fibre services in the City of Johannesburg. All you have is 3 000kms from DFA, plus another 900 from the City, where that additional 900kms that is built could have extended to urban areas or rural areas.

ALEC HOGG: Did you just not talk to each other?

ALEC HOGG: You tried. Is it time for an IT CODESA maybe, Jacques, where everyone can get around the table and say, “Come on, let’s trust each other. Let’s work together.”

JACQUES DU TOIT: I definitely agree with that. I think you’ve got the profit-chasing entities trying to keep their cards close. There’s no cohesion between them and what the State wants to achieve. I think we are losing out on achieving some key milestones. We’ve missed out on LTE. We’ve missed on local Loop and Bundling. Somebody needs to put his foot down and say, “Listen, let’s achieve these milestones.”

ALEC HOGG: Why are we missing out? What’s stopping people from sharing it?

JACQUES DU TOIT: I think there’s a lack of discipline and a lack of ownership.

ALEC HOGG: A lack of trust?

JACQUES DU TOIT: No, a lack of discipline. If you get told to do something, you meet the deadline, and you deliver, and move on. Right now, if you don’t deliver then nothing really happens to you. I believe the State needs to intervene there.

ALEC HOGG: Do you agree Reshaad?

RESHAAD SHA: I would, and I mean LTE is a great example because it’s a resource that could have been used to monetise and deliver services. It is not like another resource, like a National resource, like gold, where eventually you go and dig it out you can still get some value for it. While a spectrum, for as long as it remains un-awarded and unused, it is not like you can recover anything from it. It’s gone. I like the thought of ITC CODESA, with very specific objectives, getting people around the table to say, “We have to influence the 2020 plan for South Africa. We have GDP targets that we are going to miss, if we don’t have the connectivity.”