Today Discovery announced the terms of its R5bn rights issue, unveiling the surprise that it will be allocating around 40% of the funds to buying an extra 55% of Discovery Card (for R1.35bn) and injecting a further R800m into that business. I caught up with CEO Adrian Gore this afternoon to talk through what is only the third capital raising by Discovery in its 23 year history. He shared the internal excitement about the Card deal – securing the “chassis” from which the group can have a full tilt at the financial services sector. – Alec Hogg

You must have thought about this real long and hard before deciding to issue fresh equity…….

We certainly did and it may be fair to say that we’ve been quite scared of raising capital. Since the start of Discovery in 1992, the truth is that I think we’ve raised capital twice before – when we started; in 2003 or thereabout – and now. We’ve been quite careful in terms of raising capital but I must say Alec, I think an organisation that’s growing and doesn’t want to expose itself to undue risk must raise proper equity capital to fund growth. That’s been our approach. I certainly think it’s the right thing. 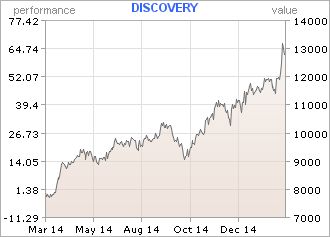 Actually not. In truth, we’ve had a number of debates and analyses done over probably, the last 18 months to two years as the business has grown. The main impetus behind us has been the development in the U.K. To an extent, the key issue for that has been the opportunity of Vitality Life in the U.K. and its rapid growth without the Prudential (as a partner). Providing the funding part of the acquisition, making it fully a Discovery business – we’ve solved a potential funding problem. As I said, this was really about the growth of our business and it had little to do with the share price.

You announced today though, that you are going to be changing the relationship with FNB on the Discovery Card…….

If you look at the Discovery Card, it’s approaching a R300m profit stream. We’re buying up from around 20% to 75%, so we’re buying around 55%. It’s approximately R150m profit that we’re buying, R1.35bn is less than a ten PE. If you look at that compared to the Discovery share price or the rating, I think it is value adding. Our approach to things is always about the long term. We look at potential growth of that business. We’re not just buying that 55 percent.

The intention is to build a much bigger financial services business off the chassis we’re creating.

Obviously, we believe strongly that that has major growth potential, and is one of the bigger opportunities for us. I would argue that the purchase price is great value for us but more importantly, it creates a much bigger opportunity. For us, it’s a no-brainer. It’s just taking us some time to get it done.

In your announcement today, you say your intention is to expand into other products. Can you give us a little more information?

I can’t. The reality is that the Discovery Card has taken us time to build. Its run-up has been tremendous. Over the last number of years, we’ve been debating quite heavily about where the card goes to. I think that given how it’s played, besides Discovery playing well in the banking space, the behavioural model and the actual quality of the card (besides the market share gain), has been very compelling. There’s a strong sense that it can be expanded into other clearly, traditional financial services products. I’m not in a position to give you details. We will do so as they roll out, but I think there are real opportunities around the quality of the base and the power of the Discovery Card.

Adrian, the pitching of the rights issue at R90 per share and allowing your shareholders to buy roughly nine-and-a-half new shares for every 100 they held… Was there much debate around that?

What kind of fee would you pay for the underwriting?

I presume, now that you’ve told us that R1.35bn is going to go for the Discovery Card transaction, that the entire balance of the R5bn is going into the U.K. operation.

No, it’s not that much. In the U.K., we require as much as R3bn to R4bn for the funding plan that we have. The financial services initiative with the Discovery Card is R1.35bn paid to FirstRand with a further commitment of R800m to build out the business. It’s probably R3bn to R4bn for the U.K. It’s probably R2bn to R3bn for this initiative (giving you more than five). Of course, Discovery is generating additional revenue and resources as we go along and there’s a timing issue, so we thought that five was the right number to get up to where we should be.

Would that other R800m will then be going into new projects or will that be taking over the funding responsibility from FNB?

No. It will essentially be going into building up financial services opportunities – new products around the Discovery Card.

I know you’re a regular visitor to Davos and I think you missed this year, but there was a very interesting young man who launched an Internet bank. In fact, it’s a mobile phone bank, not even an Internet bank where there are no branches and everything is done on a mobile phone. That looks to be the future opportunity when it comes to financial services. Is that playing any part in your thinking? Now you have the Discovery Card, perhaps you could launch an Internet bank off the back of it.

Alec, the data coming out of the card… If you look at the behavioural model in our results presentation and our ability to segment clients in a set behaviour, provides a very rich ability to credit score and develop unique value propositions. Having said that, I think you’re right. There’s a fundamental shift taking place in banking and industries around that, but I think those are the kinds of technologies that are open to us. I must say that the Discovery approach has really been around affecting behaviour. My sense is that an approach, purely on that technology trade generally, is risky. It’s a lottery approach. It’s never been our approach. I think we’re more conservative. We differentiate from the value proposition in a slightly different way. I think those are enabling technologies and I’m pretty sure that as we develop, those are the kinds of things we can use. However, our approach will be more conservative but hopefully, much more powerful value to the customer.

When are you likely to be able to give more detail?

I think that there’s going to be a process of bedding down the transaction. We’ll evaluate moving the Discovery Card over time, into the belly of Discovery and out of FNB. Over the next six months to a year, we’ll have more clarity and much more guidance on the direction of the products around the Discovery Card.

That’s an interesting point – bringing it into the belly….

We’ve been doing a lot of the front end: the Vitality links, the links with stores, and the Rewards part of it. FNB has done the traditional credit management of the card. We’ll bring that traditional piece across. Obviously, there will be ups and downs but generally, I think they’ve done a brilliant job of it.

Well, to make pre-tax profit of R300m in just over ten years – that’s the kind of JV everybody would like to get involved in.

I think it does have more scale, bearing in mind that it’s only been available to select Vitality members within the Discovery client base. The ability to grow it from here forward, is quite substantial. To an extent, over the last number of years we’ve been moving sideways, debating with FNB and FirstRand on where best to go, so I think there is real opportunity to grow in and of itself.

What is the size of your total client base – not the card, but Discovery’s client base)?

And only 250,000 cardholders, so I suppose that’s the obvious opportunity?

Yes. It has great potential for growth. In the Vitality base many people who apply, don’t qualify for credit, but there’s a large number who haven’t applied yet so I do believe there is great growth potential.