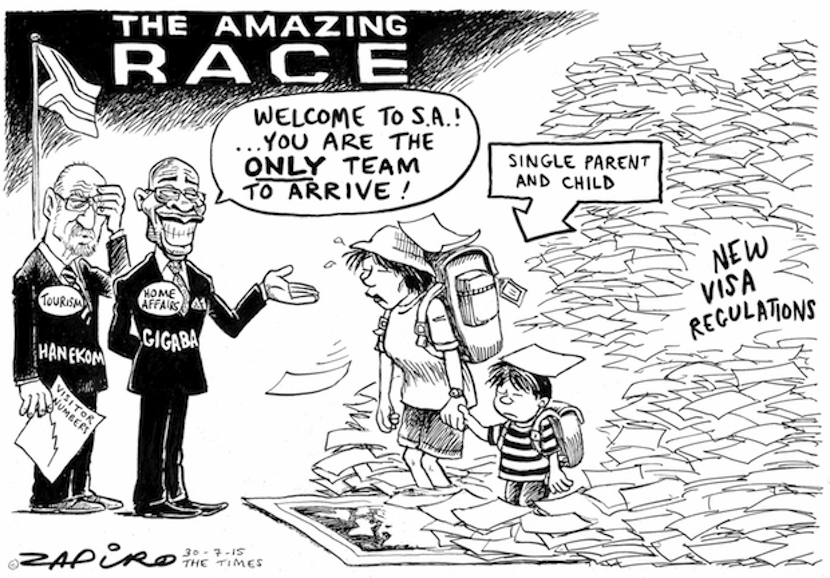 Mark Twain told us to be wary of Lies, Damn Lies and Statistics. That won’t be lost on tourism operators after SA’s Department of Home Affairs yesterday countered the wave of criticism over the new Visa requirements. Minister Malusi Gigaba’s worthy servants tell us real-world evidence is all a lie. OK, so there are the occasional “unintended consequences” (not sure Ambassador Douglas Gibson would put it that way) but the official statistics prove those are exceptions. So who do we believe? Hundreds of tourist-based businesses now teetering? Or the numbers produced by minions proving Gigaba was right all along? – Alec Hogg

The Department of Home Affairs was satisfied that residents and foreign nationals were complying with the new child travel requirements that took effect on June 1‚ largely to promote enforcement of the Children’s Act and Prevention and Combating of Trafficking in Persons Act.

“Perceptions that new requirements are impossible or impractical to enforce hold no water. People are complying in spite of misinformation and the ‘talking-down’ of South Africa that has been happening‚” the department said on Wednesday.

“Observing measures for protecting children helps in ensuring minors receive consent of parents or guardians before travelling‚ in accordance with national legislation and international obligations for combating abduction and trafficking in persons.

According to the department 132‚353 children were processed – arrivals and departures – at ports of entry in June. Of these‚ 1‚878 were recorded as having not met requirements‚ placing compliance levels at 98%. June arrival of foreign children was 57‚436‚ with departures at 74‚917.

July’s volume of minors’ movements was 216‚259‚ with 2‚052 not satisfying requirements‚ placing compliance at more than 99%‚ “showing patriotic citizens and law-abiding foreign nationals understand why it’s important to protect the most vulnerable among us – the children”.

The department said it had also noted that both Europe and the Americas showed slight increases for July (year on year) after showing slight declines for June (year on year).

The department said it had noted concerns raised with regard to experiences of some travellers and was hard at work improving traveller processing. “With the support of all stakeholders‚ it is possible to resolve any unintended consequences.

There was no conclusive evidence showing that since the new immigration regulations had taken effect there had been a sharp decline in numbers of foreign travellers arriving in SA and that jobs had been lost.

“When it released the 2014 tourism report‚ on 4 August 2015‚ Statistics South Africa stated that the salient characteristics of the 2014 tourists did not differ much from observations from previous years. It said that in recent years‚ there has been a general slowdown in the rate of growth of tourists arriving in the country.

“South Africa’s regulations are not onerous‚ but rationale. They are applied similarly in some countries‚ including guidelines from the US‚ UK‚ Australia‚ Canada and Schengen countries (26 European countries that have abolished passports).”