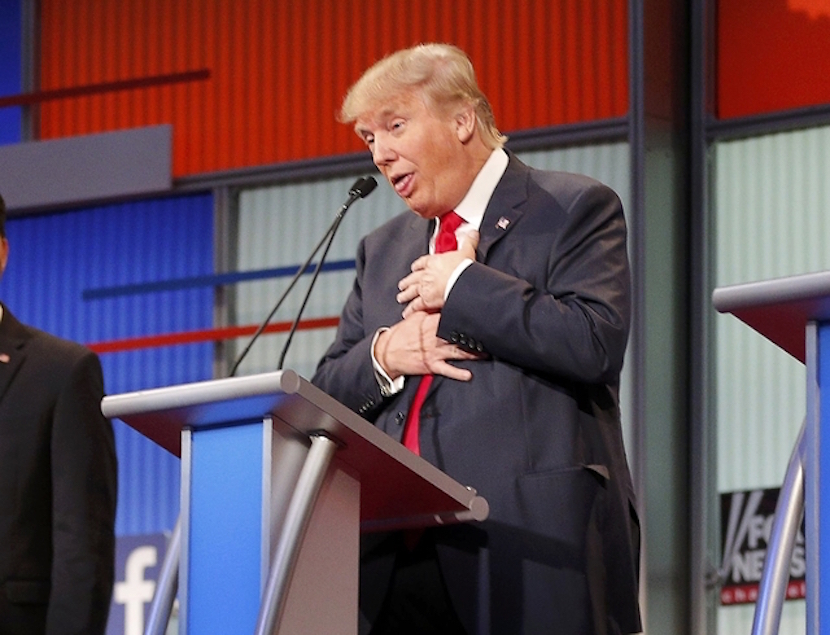 Hillah The Hun’s chances of becoming the US’s first female President soared after The Donald put both feet into his mouth – again. Democrat Hillary Clinton, already overwhelming favourite to win next year’s US Presidential Election, enjoyed another huge boost last night when the man leading the opposition, Donald Trump, reckoned a female anchor’s menstrual cycle caused her to rough him up in last week’s debate among Republican hopefuls. It could be one gaffe too many for Trump, who is rapidly alienating the few friends he has left in his party. He may now be forced to follow through on a threat that if he doesn’t get the Republican nomination, he’ll run as an independent. Doing so would cut the Republican vote in the same way Republican turned independent Ross Perot did in 1992, taking votes from incumbent President George Bush and handing the other Clinton – Bill – the Presidency. You can already hear the conspiracy whispers. Having succeeded once by having an “independent” stand, might the Clintons have done a deal with Trump? Even if that’s wild speculation, there’s no doubting that Trump is looking increasingly like Hillary’s secret weapon. – Alec Hogg

By Michael Mathes of Agence France-Presse

Donald Trump, the defiant, mercurial reality TV host leading the Republican presidential nomination race, is facing a backlash over his crude comments and fears he could mount an independent White House bid.

The trash-talking billionaire has upended the Republican campaign, refusing to apologize for suggesting that a popular Fox News debate moderator asked him tough questions because she was menstruating.

“She should be apologizing to me,” Trump told MSNBC early Monday, after appearing on several Sunday talk shows to defend his suggestion that Megyn Kelly had “blood coming out of her wherever” as she questioned him during last week’s Republican debate.

Trump has shot to the top of the Republican field, invoking a rebellious, improvisational tone embraced by supporters, and striking fear into a party establishment keen to see a serious, viable candidate emerge to battle likely Democratic nominee Hillary Clinton.

But “what the rest of the Republicans saying about women is also outrageous,” she went on, seizing the opportunity to attack other Republicans, whom she has accused of waging a war on women.

Trump insisted Washington has been consumed by political correctness, and that he brings a dose of straight talk to the White House race. But is that enough to win over America?

“There is a difference between avoiding political correctness and being a moron,” Brian McClung, a Republican strategist who consulted for Tim Pawlenty’s 2012 presidential campaign, told AFP.

Republican candidates and leaders, McClung stressed, “have to stand up and speak out against Trump’s brand of stupidity.”

But in the first major poll released since the fractious debate featuring Trump and nine rivals, and an event with seven second-tier hopefuls, the campaign’s most controversial candidate remained on top.

Experts say The Donald — as New York media call him — is now entering a more difficult campaign period, one marked by increasing skepticism about his political intentions, deeper scrutiny of his past, and concern about Trump’s back-up plans.

“RedState Gathering,” a high-profile seminar of conservatives, disinvited Trump to its weekend conference, where Jeb Bush laid into the frontrunner.

“Do we want to insult 53 percent of all voters?” Bush asked at the Atlanta event.

“What Donald Trump said was wrong. That is not how we win elections.”

Trump signalled campaign changes are afoot, including the departure of long-time strategist Roger Stone, who reportedly urged Trump to lay out a political agenda rather than focus on sniping.

In an interview with The Washington Post, Trump said he “fired” Stone, while Stone said he quit because of the direction of the campaign.

His Republican rivals are not holding back.

Carly Fiorina, the former Hewlett-Packard boss who performed well in the first debate and catapulted from the back of the pack to fifth place with 10-percent support in the PPP poll, blasted Trump’s “completely inappropriate and offensive comments” about Kelly.

Paul cited the real estate mogul’s previous support for Democrats, including the Clintons, and for liberal causes like abortion rights and universal health care.

“Are conservatives really willing to gamble about what Donald Trump really believes in?” Paul wrote in the Independent Journal Review.

Despite the blowback, McClung anticipated “a longer slog ahead” and that a Trump campaign could last until early 2016 and Iowa, which holds the first primary vote.

“That’s when the Trump candidacy ends,” he predicted.

Brad Marston, another Republican strategist, said Trump does not automatically spell disaster for the party, but he doubts the billionaire will translate his early lead into a serious candidacy.

“He would have to come out with well-thought-out, realistic policy prescriptions to back up his bombast, and I don’t think he’s inclined to do that,” he said.

And Trump’s post-debate statements “disqualify him for serious consideration as our nominee,” Marston added, especially given how Mitt Romney lost the women’s vote by 12 points to President Barack Obama in 2012.

Even if Republicans jettison Trump, he could still throw a wrench in the spokes by running as an independent, something he declined to rule out during the debate.

“Even if he wears out and he’s not much of a third party threat, he may well dictate the way the campaign narratives run, and that could be very beneficial to Hillary Clinton,” he added.