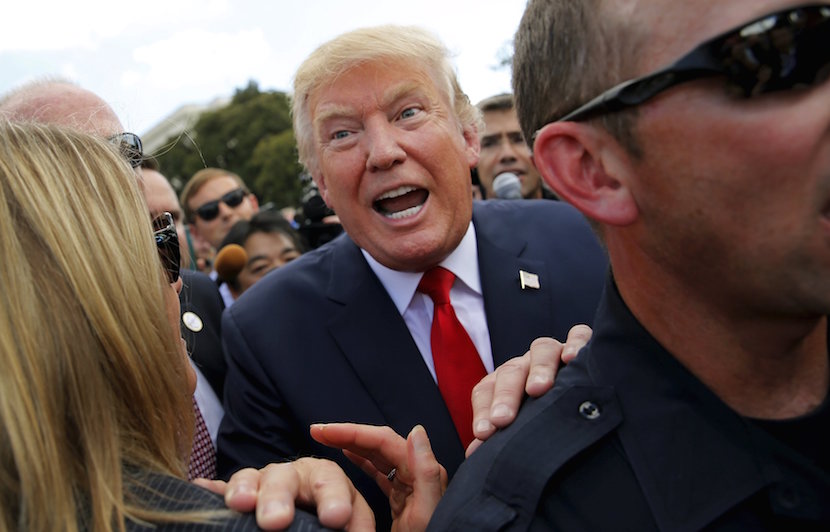 Say what you will about American billionaire and 2016 Presidential candidate Donald Trump, but you cannot accuse him of inconsistency. Trump’s message of America First is resonating with potential voters, leapfrogging him from no-hoper to clear leader in the race for the Republican Party’s nomination. As witnessed in the classic Oprah Winfrey show of a quarter century back, Trump hasn’t changed his message in the past 25 years. Even then he complained about being sick of US citizens being abused by powerful vested interests, and didn’t rule out one day running for President – and winning. On the other side, popularity of bookies’ odds-on favourite Hillary Clinton is dropping fast. She now trails fellow Democrat Bernie Sanders in some key states as repercussions of “emailgate” widen. For Clinton, it must feel like the re-run of an old movie. She looked a shoo-in for the democratic nomination eight years ago until the campaign of a young senator from Illinois gathered momentum at the perfect moment. – Alec Hogg

By Michael Mathes of Agence France-Presse

The results reinforce a steady trend in the 2016 race: with five months to go before the first primaries, political outsiders — fueled by public anger and impatience with Washington — are rising up against the race’s establishment figures.

A CNN/ORC poll found Trump surging to 32 percent support nationally, becoming the first in the broad Republican field to top 30 percent in the race for the White House.

The brash real estate mogul has gained eight points since August, nearly tripling his backing since shortly after launching his campaign in June.

Together, these two men — who have never held public office — are now backed by a majority of Republicans and Republican-leaning independents, according to CNN/ORC.

A different CNN/ORC poll, also released Thursday, found that Carson now leads Clinton in a hypothetical general election matchup, 51 to 46 percent, and that Clinton is essentially neck-and-neck with Trump and Bush in a hypothetical face-off.

Bush, former governor of Florida and the son of one president and brother of another, came in third among Republicans in the first poll, with nine percent, a drop of four points since August.

In the Democratic race, Sanders nipped former secretary of state Clinton 41 percent to 40 percent in a Quinnipiac University Poll of likely Democratic caucus participants in Iowa, which holds the first contest to nominate party flagbearers for the November 2016 election.

The come-from-behind result is the second in a month that shows the independent Sanders surpassing Clinton in a key state.

Last month, he galloped past her in New Hampshire, which holds the first primary after Iowa, to snatch a 44-37 advantage, according to a Franklin Pierce University poll.

The results highlight a surging Sanders while Clinton, dogged by an email scandal, has seen her polling numbers slide in recent months.

Clinton was at 52 percent in Quinnipiac’s July 2 Iowa poll, while Sanders earned 33 percent.

Read also: Donald Trump: From no hoper to Republican favourite, despite gaffes

“He is the candidate of the Democratic left, against his own party’s bosses and their prized presidential candidate, Secretary Hillary Clinton.”

Nationally, the CNN/ORC poll found Clinton’s lead over Sanders has shrunk to just 10 percentage points among Democrats and Democrat-leaning voters, although that was due to losing ground to current Vice President Joe Biden, who is still mulling a potential presidential run, than to a surge by Sanders.

Clinton’s favorability rating among Iowa Democrats remains high, at 76 percent to 20 percent, with voters saying by a 64-30 percent margin that she is honest and trustworthy, the poll showed.

That is far better than national polling, in which Clinton’s favorability is under water, with just 39 percent viewing her favorably against 51 percent who don’t, Quinnipiac reported last month.

Sanders’s favorability rating is 78 percent with six percent against, and 86 percent of voters say he is honest and trustworthy, compared to just four percent who don’t believe he is.

Among Republicans, Trump has shown staying power, despite predictions that his star would fade as the primaries near.

Fifty-one percent of Republican voters now think Trump will emerge as the nominee, compared to the 19 percent who believe Bush will top the ticket according to CNN/ORC.