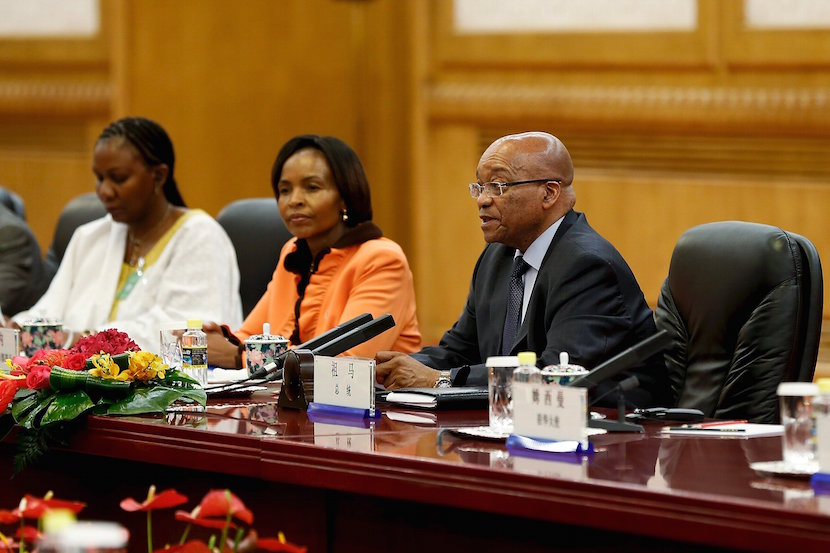 South African President Jacob Zuma’s travels to foreign lands are burning through taxpayer money at an alarming rate. His objective, clearly, is to drum up investment interest, particularly from fellow BRICS members China and Russia. With hindsight, it has been an expensive fool’s errand. After blowing a staggering $400bn in its ill-advised efforts to defend its currency and stock market, and China is in no mood to dispense largesse. And with its economic growth having dropped from its double digit past (5% the best hoped for this year) the Middle Kingdom is quite logically preserving ammunition for the home market. Russia is in an even worse situation, witness the recent downgrading of its debt and rapid economic contraction with its major source of income shrinking as energy prices keep falling. While Zuma has been lobbying abroad, home grown corporations any other Developing Country would kill for, have been voting with their balance sheets. Their proverbial cheque books are tightly shut with each new anti-business action from a misguided Zuma Administration. Corporate South Africa’s job-creating cash pile is ready and waiting for an alternative. Voters take note. Roll on 2019. – Alec Hogg

(Bloomberg) — South African companies are betting against an improvement in their home market.

Corporates in Africa’s most industrialized economy are so negative about future growth prospects that they’re sitting with record amounts of cash in the bank, according to Stanlib Asset Management, South Africa’s third-largest manager of domestic mutual funds. Investment by businesses has stagnated as confidence languishes near its lowest in almost four years and President Jacob Zuma’s administration struggles to reignite an economy expanding at the slowest pace since the 2009 recession.

“It’s a very significant concern,” Kevin Lings, the chief economist at Stanlib, which has been cutting back on South African equities and sitting on cash-like investments among the $46 billion it oversees, said by phone from Johannesburg. “The reason is fundamentally that corporates lack confidence.”

There aren’t many compelling reasons to be retooling plants or spending money on machinery or buildings. A 50 percent depreciation in the currency against the dollar since 2011 has made imports more expensive, while an electricity shortage, persistent strikes and the risk of slowing demand from China and sluggish economies in Europe have depressed some of the benefits to exports from the weakening rand, contributing to a contraction in the $366 billion economy in the second quarter.

Companies had 689.4 billion rand ($52 billion) on deposit in South African banks at the end of June, compared with 671.5 billion rand in November, according to data compiled by Stanlib from South African Reserve Bank data. The rate of growth in fixed capital formation by businesses after inflation increased by 0.1 percent in the second-quarter from the previous three months, when it increased 1.6 percent, and following a decline of 3.4 percent for all of 2014, the data show.

Adding to the reticence by companies to spend money in South Africa is a lack of certainty regarding government’s economic policy, including land ownership, mining rights, the availability of skills and Zuma’s commitment to implementing the National Development Plan, Lings said. The blueprint, created by former Finance Minister Trevor Manuel, sets out how the country can boost growth to 5 percent by 2019 and create 6 million jobs.

“We’re worried about valuations; we’re worried about corporate earnings,” Lings said. “We would still hold equities where companies have a broad range of earnings; companies earning money in South Africa but also globally, because there’s more support for that earning base.”

South Africa hasn’t been alone among emerging markets to suffer a slump in sentiment. The FTSE/JSE All Share Index, the South African benchmark, has dropped 1.5 percent since June 30 to trade at 15.5 times estimated earnings. That compares with a 15percent decline for the MSCI Emerging Markets Index, which trades at a forward price-to-earnings ratio of 10.8.

“When you talk about corporates not spending their money, there aren’t many opportunities on a fundamental basis, both here and abroad,” Gavin Cawse who helps oversee and advise on the equivalent of $8.2 billion as a Cape Town-based money manager at Nedbank Private Wealth, said by phone on Sept. 11. “It’s not unique to South Africa.”

South Africa’s economy has been hit by a worsening of labor relations in mining, which billionaire Patrice Motsepe said on Sept. 4 is undermining prospects for an industry that employs 440,000 workers. The government has received notice that as many as 12,000 mining jobs will be cut in the country, while labor unions say the figure could be as high as 19,000.

Christo Wiese, South Africa’s richest man, accused the government of implementing ill-considered policies that are curbing growth and undermining efforts to reduce poverty. His comments echo that of Johann Rupert, the billionaire chairman of Cie. Financiere Richemont SA and Remgro Ltd., and Simon Susman, the chairman of Woolworths, a food and clothing chain.

“You can, through policy, influence how corporates deploy their money, but unfortunately that’s not happening,” Lings said. “This is purely business concerned about current economic conditions in the country and making actual choices not to spend more money.”