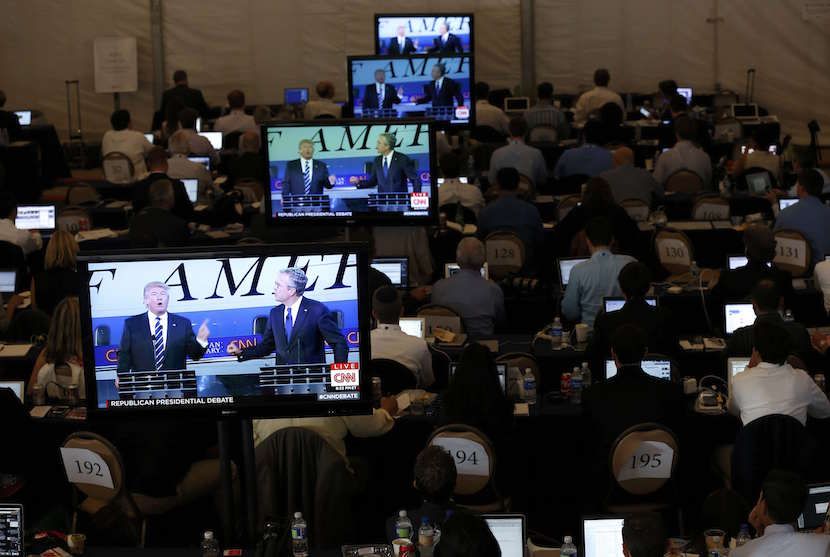 The best description I’ve heard of US Presidential Candidate Donald Trump came from SA retailing icon Sean Summers – “America’s Julius Malema, except he has hair, money and a jet.” That pretty much sums up the populist Republican party’s 2016 Presidential frontrunner. Trump shoots from the hip, often mangles the facts, regularly putting his foot into that ever open mouth. It’s as though he’ll spout anything handlers believe will bring in extra votes. That billionaire Trump who repeatedly talks up his purely business background is leading the polls raises two key questions. Are Americans really that dumb? Or has their opinion of the species fallen so far that they’re sending a message of “anyone but a professional politician”? The latter is dangerous, as South Africans have learnt to their cost. Remember, it was the ANC’s “anyone but Mbeki” which has landed the country with a Government which trade union leader Zwelinzima Vavi describes as “a kleptocracy led by thieves.“- Alec Hogg

By Anne K Walters of dpa

Washington – The 10 Republican candidates facing off against frontrunner Donald Trump in the centre-right party’s second debate late Wednesday accused him of being a childish entertainer without the temperament to serve as president of the United States.

Trump, who made faces as the moderator asked if he should be put in control of the US nuclear arsenal, pointed to his business experience as evidence he can bolster the success of the United States.

“What I am far and away greater than an entertainer is a businessman, and that’s the kind of mindset this country needs to bring it back,” Trump said. “And believe me, my temperament is very good, very calm. But we will be respected outside of this country. We are not respected now.”

Trump’s unexpected political rise has shaken up Republican presidential politics and his rivals looked to strike back as they discussed topics including the Iranian nuclear deal, Chinese cyberhacking and immigration at the Ronald Reagan Presidential Library in Simi Valley, California, north of Los Angeles.

Trump has led the crowded Republican field in recent polls, but a CBS News/New York Times poll this week showed fellow outsider Ben Carson, a retired neurosurgeon also with no political experience, closing the gap. Trump has 27 per cent support in the survey to Carson’s 23%.

Donald Trump just said “If I become president we’ll have more of everything.” Hahaha.

Carly Fiorina, a former HP executive, appeared set to gain from the debate as a fellow political outsider by frequently going after Trump directly and addressing specific foreign policy challenges to highlight his lack of depth.

Trump dismissed efforts to pin him down on foreign policy specifics pointing to his persona and experience with international business deals as ways to smooth out international crises.

Fiorina scoffed at the idea, calling Puting a “bad actor” that the US should isolate.

It also got personal between the two as they attacked each other’s business records and Fiorina responded to earlier comments by Trump about her looks.

Jeb Bush, once considered the likely frontrunner, lags far behind, tied in a distant third in the CBS/New York Times poll with support from just 6% of Republican primary voters.

He sought to reclaim the mantle of the party once led by his father and brother, but was forced to share the stage with the political outsiders that have dominated the campaign so far.

“You can’t just, you know, talk about this stuff and insult leaders around the world and expect a good result,” he said, alluding to Trump’s brash style. “You have to do this with a steady hand, and I believe I have those skills.”

Bush was also forced to defend his family ties as a son and brother of the last two Republican presidents and took Trump to task for attacking his Mexican wife.

“I’m my own man. I’m going to create a strategy that is based on the simple fact that the United States needs to lead the world,” he said, noting the next president would take office in 2017, not 30 or 16 years ago when presidents George HW Bush and George W Bush took office.

Concern within the Republican Party has grown as Trump has continued to rise despite inflammatory remarks that many fear could damage the centre-right party’s brand ahead of November 2016 general elections.

Trump caused waves in the first debate last month when he refused to rule out running for president as a third party candidate – a move that would surely hurt Republican chances of recapturing the White House. He has since signed a pledge vowing to support the party’s nominee.

The first ballots will not be cast in intra-party primaries until February, in a series of state-by-state contests with the nominees from the Republican and Democratic parties facing off in November 2016. – DPA