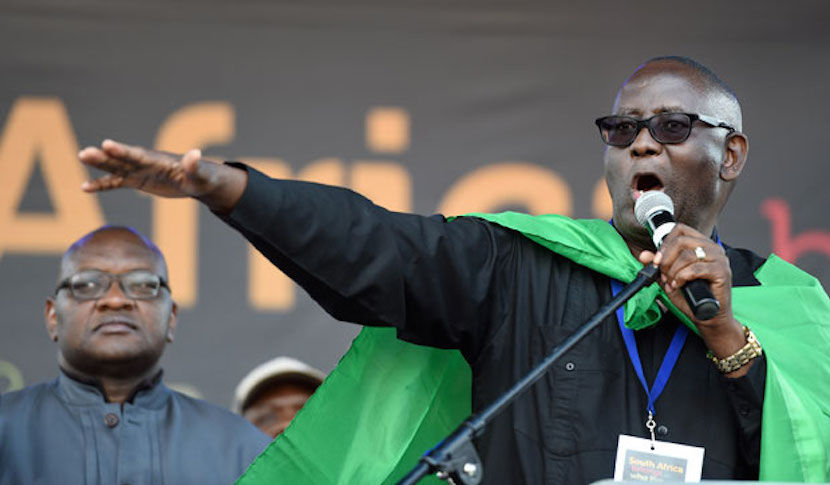 Almost a century and a half ago the British Reform League’s “right to vote” demonstration in London’s Hyde Park introduced a highly effective way of mobilising civic anger to effect change. Tomorrow’s march by South Africans to Pretoria’s Union Buildings has similar significance. It has been billed as a way for concerned citizens to air their frustration at the swelling wave of corruption. But as most recently reflected in the Arab Spring, the consequences of mass actions of this nature are unpredictable. The political leadership is playing it cool, with the ANC spokesman quoted in the article below as saying it’s “not like a vote of no confidence…” That reflects a Hosni Mubarak-type disconnect with reality. The focal point of the anti-corruption lobby is the pillaging of public funds for President Jacob Zuma’s private residence at Nkandla. Which has been amplified by idiotic attempts at justification (ie the “fire pool” video) and subsequent attacks on the Public Protector, an institution specifically established to protect citizens against abuse of power. Tomorrow could well be the day South Africa’s young democracy comes of age.  – Alec Hogg

by Mike Cohen and Paul Vecchiatto

(Bloomberg) — Thousands of marchers plan to take to South Africa’s streets on Wednesday in the first major protest against corruption since the ruling African National Congress came to power after the end of apartheid more than two decades ago.

About 350 groups, including labor unions, civil-rights groups and religious organizations, have pledged support for marches to the Union Buildings in Pretoria, the capital, that house the government’s offices, and to Parliament in Cape Town. The action is being organized by the Unite Against Corruption campaign.

“We are marching slowly, steadily towards a failed state,” Zwelinzima Vavi, the former head of the Congress of South African Trade Unions, or Cosatu, and a lead organizer of the protest, said in Cape Town last week. “Anybody who can’t see that must have his head examined. We have felt that it was necessary to try and call on South Africans to wake up.”

While the ANC won 62 percent of the national vote in last year’s elections, its critics accuse President Jacob Zuma’s government of being complicit in corruption. State entities wasted 1.17 billion rand ($85 million) in the year through March last year and incurred 33.6 billion rand in irregular expenditure, according to the nation’s Auditor-General.

Graft has been a drag on South Africa’s economy, which contracted an annualized 1.3 percent in the second quarter. The World Economic Forum’s 2015 Africa Competitiveness Report ranks corruption as the second-biggest impediment to doing business in sub-Saharan Africa, after a lack of financing.

Zuma, 73, has been linked to a series of scandals, including the spending of 216 million rand of taxpayer money for security improvements to his private residence that included a swimming pool, amphitheater and enclosures for cattle and chickens. He denied authorizing the renovations and members of his government and ANC lawmakers blamed officials and contractors for inflating prices.

One of the main drivers of the protest is the National Union of Metalworkers of South Africa, the nation’s biggest labor union, which has announced plans to establish a new workers’ party. Cosatu, which supports the ANC, expelled Numsa from its ranks last year after it refused to back the ANC in the elections and axed Vavi this year as its general secretary.

A large turnout for the protest would “give a lot of oxygen and a lot of publicity to a new party on the left, one that isn’t tainted at all by corruption,” Boye Gbadebo, an analyst at consultancy Ake Partners, said by phone from Johannesburg. “This could be the beginning of something quite significant. There is a sense of disenchantment with the ANC.”

The protest has also been backed by the Economic Freedom Fighters, the second-largest opposition party led by Julius Malema, the expelled ANC youth leader.

The ANC welcomes the protests because they show civil society is engaged with issues confronting the country, party spokesman Zizi Kodwa said.

“It’s not like it’s a vote of no confidence in the efforts of government and the state to root out corruption,” he said by phone.

More than 70 percent of South Africans say corruption has worsened since 2010, a survey released by the nation’s statistics office on Dec. 4 showed. The country ranked 67th out of 174 countries in the Transparency International Corruption Perceptions Index 2014, down 12 positions from five years before.

“Internal democracy has died inside the ANC,” said Vavi, 52, once a vocal ANC supporter. “Brave men and women who played such a critical role to bring down this evil system of apartheid have now been won over by the system of patronage, are unable to open their mouth in any way for fear of reprisals and redeployment to less important positions.”

The staging of the anti-graft demonstration follows a series of protests by residents of South Africa’s impoverished townships against a lack of houses and services such as sanitation, water and education.

“The anti-corruption message is likely to resonate in communities affected by poor service delivery that is often a direct result of corruption and patronage,” Mike Davies, founder of political advisory company Kigoda Consulting, said by e-mail. “While the march is unlikely to have an immediate impact, it will set the stage for the 2016 local elections, where corruption and wider governance issues will be an important factor in campaigning.”