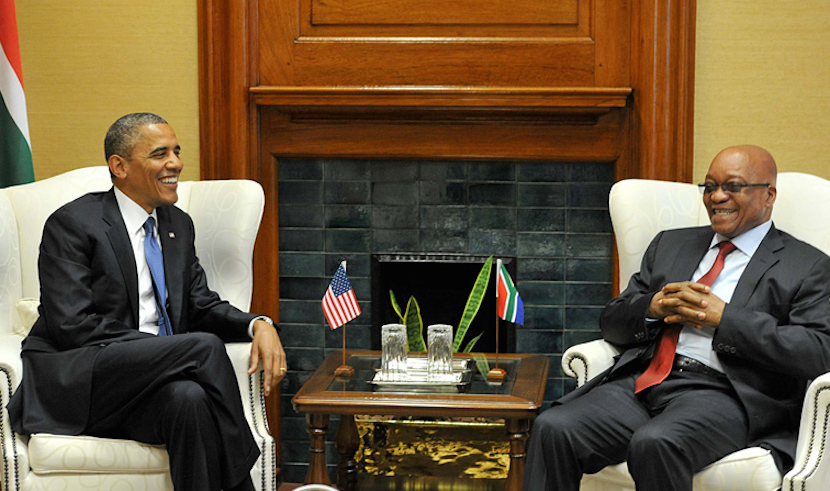 For all his faults, SA President Jacob Zuma is quite obviously a talented politician. For a moment there it seemed for all the world he’d painted South Africa into a rapidly unravelling BRICS corner. But the ace manipulator seems to be working his way out of trouble. Fresh from a visit to the heavyweight of Europe, German Chancellor Angela Merkel, the Presidency officially confirms that on Wednesday Zuma chatted to the Leader of the Free World. Barack Obama’s time isn’t cheap, but Merkel possesses the political capital to call in a favour which, perhaps, Zuma asked for. We’ll only get the full story when memoirs are written years into the future, but it’s not hard to interpret what’s going on. Zuma has belatedly realised that his warmongering pal in Russia is fighting bankruptcy and “Mr Eleven” (as Indian media called President Xi) in China has too many other demands on his country’s bank account to worry about SA’s problems. Realpolitik is pushing South Africa, a constitutional democracy, back into its natural home. Hope springs. – Alec Hogg

The Presidency confirms the communication released by the White House about the telephone conversation between President Jacob Zuma and President Barack Obama.

President Obama called President Zuma last night (11 November 2015) and the two leaders discussed among others issues, the situation in Burundi, the upcoming 21st Conference of the Parties to the United Nations Framework Convention on Climate Change (UNFCCC) summit that will take place in Paris at the end of November through to mid-December, the African Growth and Opportunity Act (AGOA) as well as concerns about violence in the Middle East.

The two Presidents exchanged messages of condolence on the tragic fatal shooting of the citizens of South Africa and the United States in Jordan this week.

With regards to AGOA, it was acknowledged that South Africa and the US are close to concluding discussions regarding the meat imports into South Africa.

On climate change, both leaders agreed to contribute to ensuring a successful Summit in Paris.

The two Presidents reaffirmed the warm bilateral relations between the two countries and governments and pledged to continue cooperating on various matters of mutual interest bilaterally and globally.