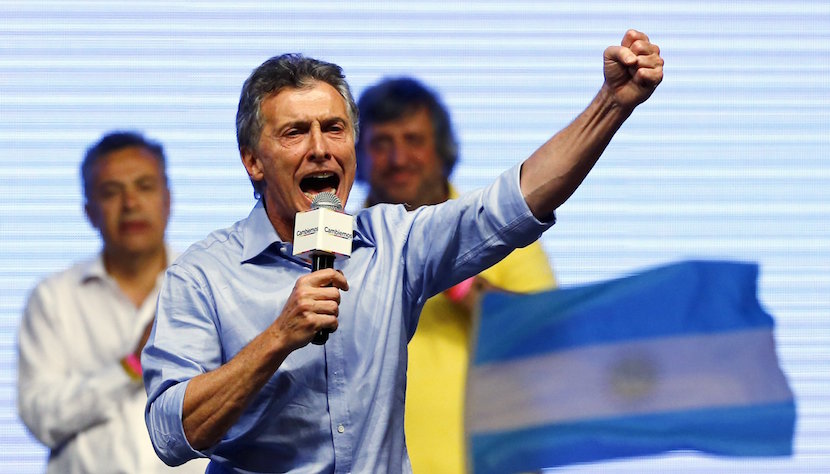 With the world’s easy money tide receding, sanity is returning. The sloshing of cash was able to disguise many dumb economic experiments around the world. But as Quantitative Easing reverses, reality is returning fast. South American voters are leading the way, reversing the brief resurgence of socialism as the consequences of misguided policies become increasingly obvious. After 12 years of socialism, Argentina has sobered up. Its new pro-business President has promised to re-align the country, doing what it takes to fix State intervention and attract international capital back to the country. He calls this new approach the “opposite of 21st Century Socialism”. The tide has most certainly changed against left wing idealism. With major municipal elections around the corner, South African voters will surely be readying themselves for a similar political realignment. – Alec Hogg

(Bloomberg) — Argentina voted for deep change on Sunday, electing the center-right opposition leader Mauricio Macri to be president in a decisive end to 12 years of leftist populism, setting the stage for economic liberalization, a warming of relations with the U.S. and political reverberations across Latin America.

The candidate of the ruling party, Daniel Scioli, conceded defeat and called Macri to congratulate him. With more than 98 percent of the ballots counted, Macri had 51.5 percent, while Scioli followed with 48.5 percent, according to the National Electoral Council.

“A wonderful new stage begins for Argentina,” Macri told his supporters in his victory speech.

The 56-year-old mayor of Buenos Aires is a wealthy businessman and former head of one of the country’s most popular soccer teams. He has promised to lift currency controls and negotiate with hedge fund creditors to boost investor confidence amid the lowest reserves in nine years. He will also focus on cutting inflation, fixing the largest fiscal deficit in 30 years and luring back international investment dollars.

Scioli and his supporters have warned that such policies, which they dismiss as “savage capitalism,” will erode vital social welfare programs on which the poor depend and create an economy that caters to the rich. Macri will govern with a minority in both houses of Congress, although he is bolstered by the surprise capture of Buenos Aires province in last month’s election.

He also will have the support of many of the country’s 32 million voters — 81 percent of them took part on Sunday — who say they are tired of the rule of President Cristina Fernandez de Kirchner which they consider often dishonest.

“The government is constantly saying we live in paradise,” said Santiago Canedo, 28, a law student who voted for Macri. “They say one thing and then do the next. I’m optimistic that things will change.”

Argentina, under Fernandez and her deceased husband Nestor Kirchner for the past dozen years, has stood shoulder-to- shoulder with other leftists in the region, including the Castro brothers in Cuba, Nicolas Maduro in Venezuela and Rafael Correa in Ecuador. Macri calls his approach the opposite of Venezuela’s “21st century socialism”: “21st century development.” He has threatened to have Venezuela ousted from regional bodies over its anti-democratic policies and human rights abuses.

Those countries, as well as Brazil, rode a wave of commodity price highs — in oil, corn, soybeans — leading to a string of leftist victories. They are now suffering from the collapse of those prices and Macri’s victory in South America’s second largest economy could augur a rightward regional swing, including stepped-up pressure to impeach President Dilma Rousseff of Brazil. Legislative elections are due in Venezuela on Dec. 6 and the opposition is leading in all polls.

Fernandez, who will hand over power to Macri on Dec. 10, has used a number of levers to promote her policies, including seizing pension fund assets and the nation’s largest energy company while increasing welfare programs and battling U.S. hedge funds over defaulted debt.

There is skepticism in some quarters about Macri’s ability to govern. This is because he will not have a congressional majority and because he is not from the Peronist movement which has, in effect, ruled Argentina for most of the past seven decades using populist tactics of both right and left. One result of this election will be a crisis within Peronism as the movement charts its next moves.

“The first months, as a way of showing what’s to come, are going to be very important to assuage some sectors that have doubts over Macri’s capacity to govern,” observed Lorena Moscovich, a political scientist at the University of San Andres in Buenos Aires. She said he needed to move quickly during his honeymoon period to push through the most painful changes. No non-Peronist has finished his term in office since the movement was founded in the 1940s by Juan Peron.

Scioli, who during his campaign pledged to maintain several of Kirchner’s policies, won the first round on Oct. 25 with 37 percent to Macri’s 34 percent. But he had been expected to do far better, with many forecasting he would take the presidency with the 10-percent spread required by law to avoid a runoff. Instead, Macri nipped at Scioli’s heels and then stole the momentum that sent him to the presidential palace known as the Casa Rosada, or pink house.

In anticipation of a Macri victory, bond yields are already at an eight-year low and the local stock market rallied to a record high.

“It’s probably the most obvious country in the world to make the transformation from where it is to where it could be to reach its potential with the least amount of struggle,” remarked Tim Love, investment director of GAM, an asset management firm. “You’ve got it all and you’ve got a working democracy. This is a lay-up compared to the other frontier markets I deal with in the world.”