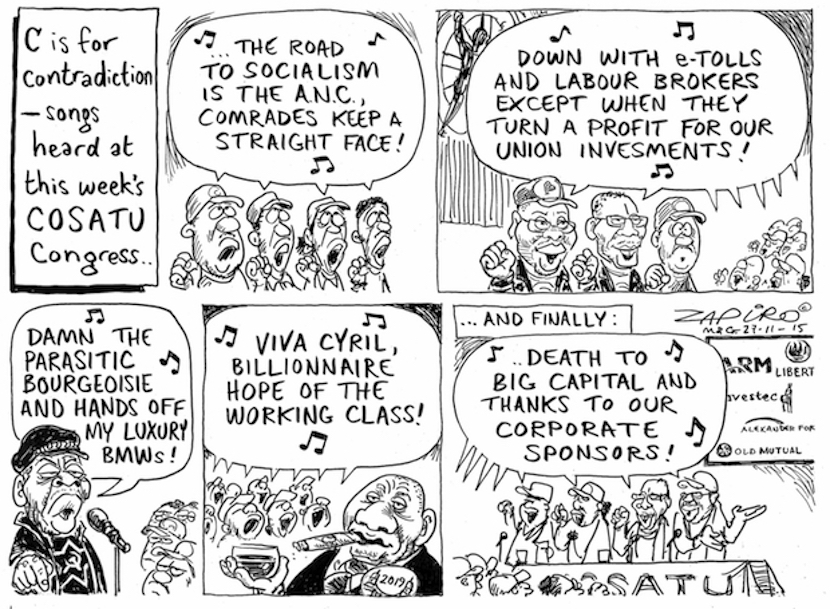 Reality can be disguised for periods, but eventually those ironclad economic rules force a return to rationality. This is becoming obvious even for those Left-Wing diehards still propagating unworkable populist ideals of socialism. Political scientist Francis Fukuyama summarised the new reality in his famous “End of History” essay after the fall of the Berlin Wall in 1989. But even a dying horse has one last kick – and for socialism, this came from an unlikely quarter. The creation of money in the wake of the Global Financial Crisis temporarily buoyed commodity prices. But that tap is now closed. And as the easy money tide recedes, the Left’s much lauded “21 Century Socialism” has been exposed as mere lipstick on the same old dressed up hag. South America hosted the last breaths of socialism’s expiring steed. No surprise to see it leading the return to normality. – Alec Hogg

(Bloomberg) — President-elect Mauricio Macri is pledging to turn Argentina’s economic and foreign policy on its head, introducing market-friendly and free-trade measures — a nail in the coffin of the economic populism that has dominated much of South America for a decade.

Macri, a 56-year-old wealthy businessman, has said he will abandon currency controls, cut subsidies, embrace closer ties with open economies of the Pacific Alliance, and seek to oust socialist Venezuela from the regional trade block Mercosur, just about three years after it won entry.

Leftist leaders throughout the region are losing support as money for their generous social programs is running out with the end of the commodity boom, said Riordan Roett, director of Latin American Studies at Johns Hopkins University’s School of Advanced International Studies in Washington. Venezuela’s Hugo Chavez and Brazil’s Luiz Inacio Lula da Silva no longer bestride the continent, propounding a new form of socialism for the 21st century and baiting the U.S.

“The populist left is marching out the door,” said Roett by phone. “They all rode on this commodity boom beginning in the early 2000s, misspent it, didn’t invest it. Now there’s no money.”

Argentina will post its biggest fiscal deficit in about three decades this year, while Brazil’s widens to a record. Venezuela doesn’t even report its fiscal balance any longer as its economy slips into chaos.

The shift to more orthodox policies is good news for business, said Michael Shifter, head of the Inter-American Dialogue in Washington.

Macri spoke by phone with President Barack Obama Wednesday to discuss trade and the energy sector, while agreeing to strengthen investment links with the U.K. in a separate call with Prime Minister David Cameron. Current President Cristina Fernandez de Kirchner had poor relations with the U.S. and worse still with the U.K.

Macri has also said he will push the Mercosur to move along in trade talks with the European Union.

In Brazil, the shift in policy means the government is turning to private and foreign investors to help finance infrastructure projects. In an effort to help shore up public accounts the government last week sold the rights to operate 29 hydro-power plants, raising 17 billion reais ($4.4 billion) from bidders including China’s Three Gorges Corp.

Even Bolivia’s Evo Morales, who seized foreign-owned gas fields in 2006 and maintained his anti-capitalist rhetoric after winning a third term last year, has shown signs of embracing private capital. In October he was courting investors in New York to lure hydrocarbons and mining investment.

Still, don’t expect a return to the kind of economic liberalism the region adopted during the so-called Washington Consensus in the 1980s and 1990s, when import tariffs were slashed, state assets sold off and industries deregulated, said Shifter.

“The new leaders coming in, like Macri, politically can’t afford to go back to the pure market formulas of a couple of decades ago and reject the social policy advances that have been made,” said Shifter. “They’re going to have to accept them because people expect them to continue — if not there could be a backlash.”

Faced with the fiscal shortfall, Brazil’s President Dilma Rousseff is unwinding tax breaks, cutting spending and lifting price caps on fuel and energy as the budget deficit balloons. In response, her disapproval rating has surged to the highest of any Brazilian head of state.

The only large economy in South America bucking the trend is Venezuela, where President Nicholas Maduro is clinging to a myriad of stop-gap economic policies including multiple exchange rates and price controls to buffer the impact of the plummeting price of oil, its main export item. Yet even here change may be on the horizon. Polls show the opposition is set to obtain a majority in December congressional elections for the first time in 16 years as shortages spread to everything from toilet paper to medicine.

Macri’s first point of conflict may be his pledge to oust Venezuela from Mercosur. Diosdado Cabello, president of Venezuela’s National Assembly, has already referred to Macri’s election as an “historic mistake” and warned him against meddling in the South American nation.

Macri will also seek closer ties with the more open economies of the Pacific Alliance –Mexico, Chile, Colombia and Peru — which have avoided recession following the slump in commodity prices. That more open attitude will certainly include closer ties to the U.S.

“There is a sense that there are changes afoot in the region, that the old kind of ’blame the U.S., run into the arms of Beijing and hope for eternally high commodity markets’ doesn’t cut it anymore,” said Eric Farnsworth, Vice-President of the Council of the Americas.