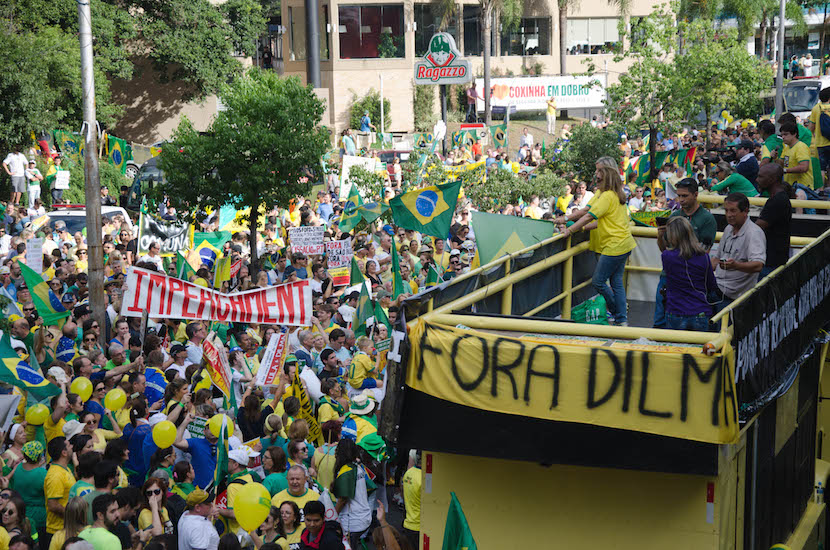 While the Presidents of China and South Africa yesterday exchanged pleasantries and MOUs, their BRICS ally to the west faced the start of a lengthy process to kick her out of office. With the economy contracting, unemployment surging and disclosures of massive political corruption in State owned companies, Brazilians have had enough of their unpopular, corruption-tainted President Dilma Rousseff. Most of the nation want her impeached, a call which the Congress is now heeding. It has now been confirmed that formal proceedings to eject Rousseff are about to begin. The scandal began months ago after it was discovered funds had been diverted from State-owned Petrobras into the coffers of the ruling political party. It hit a new high last week with the jailing of billionaire banker, BTG Pactual chief executive Andre Esteves. – Alec Hogg

(Bloomberg) — Even in Brazil, a country that is no stranger to crisis, the recent, rapid-fire succession of financial, economic and political blows has been breath-taking.

After a week in which the nation’s top, young financier was thrown in jail alongside a senator — pushing his bank into a struggle for its survival — and Goldman Sachs Group Inc. warned the economy was slipping into a full-blown depression, impeachment proceedings were initiated late Wednesday against President Dilma Rousseff.

Though the hearings will ultimately center on whether Rousseff violated budget laws, the root of her widespread unpopularity is the same that landed the banker, Andre Esteves, in jail and crippled the economy: an unprecedented corruption scandal that’s hamstrung Brazil’s biggest companies and triggered policy paralysis in the capital city. With gross domestic product now shrinking at an annualized pace of almost 7 percent and the budget deficit swelling to the widest in at least two decades, Brazil’s currency and local bond markets have posted bigger losses than those of any other developing nation this year.

“The important thing is that Brazil has a political resolution at some point over the next few months,” said Pablo Cisilino, who helps manage about $42 billion in emerging-market debt, including Brazilian bonds, at Stone Harbor Investment Partners LP in New York. “If impeachment is the way to get it then it’ll be welcomed by the market, but there are so many twists and things that can happen between now and then.”

Lower house speaker Eduardo Cunha said Wednesday night he accepted one of 34 requests to impeach the president on charges that range from illegally financing her re-election to doctoring fiscal accounts this year and last. Impeachment hearings could take months, involving several votes in Congress that ultimately may result in the president’s ouster. Rousseff will challenge any proceedings in the Supreme Court, according to a government official with direct knowledge of her defense strategy.

Cunha’s move will put the president’s support in Congress to a test after government and opposition spent months trying to rally lawmakers to their sides. The move also threatens to paralyze Rousseff’s economic agenda as she focuses on saving her political life rather than averting further sovereign credit downgrades and reviving growth.

“This is a source of short-term noise and uncertainty, and with Congress focused on the impeachment process it reduces the likelihood that you’re going to see tangible progress on the fiscal consolidation agenda,” said Alberto Ramos, chief Latin America economist at Goldman Sachs.

Some investors took Cunha’s decision as a positive, betting it could lead to a resolution of the political stalemate. Brazil’s biggest exchange-traded fund reversed losses and jumped late Wednesday to end the day up 2.5 percent.

A number of Brazilians cheered the news by banging pots and pans in upscale neighborhoods of Rio de Janeiro while honking their horns outside Congress in Brasilia. The celebrations provided a brief flashback to 1992 when mass protests preceded the impeachment of then-President Fernando Collor De Mello.

Rousseff’s approval rating is even lower than Collor’s, as a combination of rising unemployment, surging prices and accusations that top members of her party accepted bribes erode her popularity. The majority of Brazilians in public opinion polls agreed that Congress should open impeachment proceedings against the president.

The president was defiant Wednesday night. Flanked by top Cabinet members, she denied any wrongdoing and said the arguments in favor of impeachment were groundless.    “This request is unjustified,” she said. “I committed no illicit acts.”

Cunha himself is facing allegations that he accepted kickbacks and hid the money in overseas accounts. The lower house ethics committee is considering whether to open a probe that could result in his removal from office. His decision Wednesday came hours after members of the ruling Workers’ Party on the committee agreed to vote in favor of investigating Cunha. The speaker denies wrongdoing.

The party’s deputy leader in the lower house, Henrique Fontana, said Cunha’s actions represent a break with democracy. “The government may have problems, but you don’t correct the path by bringing down the president,” he said.

Opposition leader Aecio Neves disagreed and said the impeachment request is solid. There is a yearning in Brazilian society to reestablish confidence, growth and jobs, said Neves, a Senator and runner-up in last year’s presidential election. “That needs to be done without the current government,” he told reporters.

Drafted by a former member of the Workers’ Party and a retired justice member, the impeachment request accuses Rousseff of manipulating fiscal accounts to mask the size of budget deficits in 2014 and 2015. It also says her re-election campaign received money stemming from a kickback scheme at state oil company Petrobras.

The petition now goes to a special committee made up of all political parties that must issue a recommendation whether impeachment hearings should start.

The lower house then votes on the committee’s report. If two-thirds of the deputies back impeachment, hearings would begin in the Senate. In that case, Rousseff would have to step down and hand over the reins to Vice President Michel Temer. He would remain in power if the Senate impeaches Rousseff or step aside if she is absolved. Temer’s press office declined to comment.

“It’s going to start to get interesting,” said Siobhan Morden, head of Latin America fixed-income strategy at Nomura Holdings Inc. “The positive or negative interpretation depends on how long the process takes.”

Rousseff’s ruling coalition on paper has enough members in Congress to block impeachment hearings from starting in the Senate. Yet members of the alliance frequently dissent from the president. Cunha himself is a member of the largest allied party, though in July he broke with the administration and pledged to oppose Rousseff.

He made good on that promise Wednesday night.