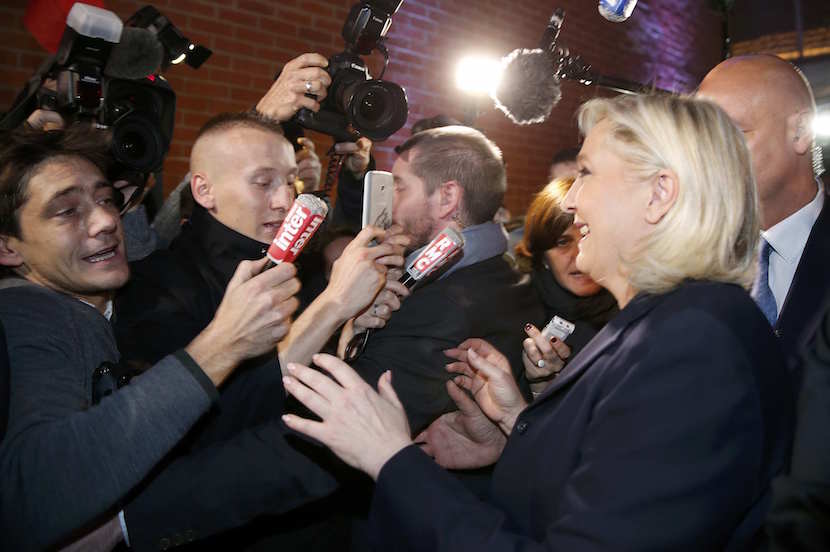 The sick socialist of Europe is finally sobering up, sending shock waves around the political world. Since its founding in 1972, France’s far right National Front led by Jean-Marie le Pen has argued for protectionism, withdrawal from the EU, anti-immigration and zero tolerance on law and order. Le Pen’s daughter Marine, who took over in 2011, has continued in the same vein. Over the weekend, this once splinter and much ridiculed grouping won a stunning election victory and is now poised to grab power in at least four of France’s 13 regions. It has never before controlled anything bigger than a medium-sized town. With half of those eligible going to the polls, the National Front harvested a higher percentage of the overall vote than traditional political powerhouses led by former President Nicolas Sarkozy and the incumbent Francois Hollande. A jubilant Marine le Pen claims the National Front is now “without contest the first party of France.” The results are an obvious boost to her chances of unseating Hollande in the Presidential election in 2017 – something that seemed beyond the realms of possibility even a few months ago. The result was a crushing defeat for Hollande’s socialists which look likely to lose control in 9 of the 12 regions it currently governs. – Alec Hogg

By Eric Randolph of Agence France-Presse

Despite the strong result, it faces an uphill battle to clinch a run-off vote next week after Socialists withdrew candidates in an attempt to block it from power.

The FN came first with around 28 percent of the vote nationwide and topped the list in at least six of 13 regions, according to final estimates from the interior ministry.

FN leader Marine Le Pen and her 25-year-old niece Marion Marechal-Le Pen broke the symbolic 40 percent mark in their respective regions, shattering previous records for the party as they tapped into voter anger over a stagnant economy and security fears linked to Europe’s refugee crisis.

Marine Le Pen, a lawyer by training, welcomed the “magnificent result”, saying it proved the FN was “without contest the first party of France”.

A grouping of right-wing parties took 27 percent, the official estimates showed, while the ruling Socialist Party and its allies took 23.5 percent.

The polls were held under tight security following France’s worst-ever terror attacks, which have thrust the FN’s anti-immigration and often Islamophobic message to the fore.

Around half the 45 million registered voters took part in the polls.

Read also: Socialists in full retreat in Venezuela, France – repeated in SA, May 2016?

Any party which secures 10 percent backing in the first round has the right to present candidates in the second round, due next Sunday.

Final estimates showed 47-year-old Le Pen taking a whopping 40.5 percent of the vote in the economically depressed northern region of Nord-Pas-de-Calais-Picardie, once a bastion of the left.

Marechal-Le Pen did equally well in the vast southeastern Provence-Alpes-Cote d’Azur, known for its glamorous beaches and stunning countryside.

The far-right success triggered an immediate debate among the mainstream parties as to whether, in regions where they trailed third, they should urge voters to back the candidate opposing the FN.

Socialist leader Jean-Christophe Cambadelis said his party would withdraw from the second round in the regions Le Pen and her niece were leading in order “to block” the FN.

But former conservative president Nicolas Sarkozy, head of The Republicans, which leads the right-wing grouping, repeated his refusal to do the same in key polls where the Socialists were the strongest opposition.

“We must hear and understand the profound exasperation of the French people,” he said.

Le Pen said she was “not worried” by Socialist plans to withdraw but acknowledged that “things will obviously be a bit less straightforward”.

Le Parisien carried a poll predicting that, faced with a straight choice in the second round between an FN and a right-wing candidate, 59 percent would vote for the conservative and 41 percent for the far-right party.

President Francois Hollande has seen his personal ratings surge as a result of his hardline approach since the November 13 attacks in Paris.

But his Socialist Party has languished behind the FN and the centre-right Republicans.

The FN’s anti-EU and anti-immigrant narrative has been a lightning rod for many French who have lost faith in mainstream parties after years of double-digit unemployment and a sense of deepening inequality.

Victories next week would not only hand control of a regional government to the FN for the first time, but would also give Le Pen a springboard for her presidential bid in 2017.

She has strived to “de-demonise” the party since taking over the reins in 2011, distancing herself from the more overt racism of her father, Jean-Marie Le Pen — this year going as far as to boot him out of the party he co-founded.

The FN’s repeated linking of immigration with terrorism has also helped it climb in the polls since the gun and suicide bombing assaults in Paris.

When it emerged that at least two of the attackers had entered Europe posing as migrants, the FN aggressively pushed a message of “we told you so”.

As the party hailed its victory Sunday, Jean-Marie Le Pen tweeted a video of Christian Estrosi, the conservative rival to Marechal-Le Pen in the southeast, wearing a kippa, a skullcap, and dancing with Jewish men — a scene apparently recorded at a bar mitzvah or other celebration.

“Take heart at a time of ill fortune,” he said in a tweet accompanying the footage, which has since been removed.

The French electoral system has tended to keep the far-right from power, as mainstream voters ganged up against the FN in second rounds.

But the party has been on a roll, taking first place in European and local polls over the past two years.