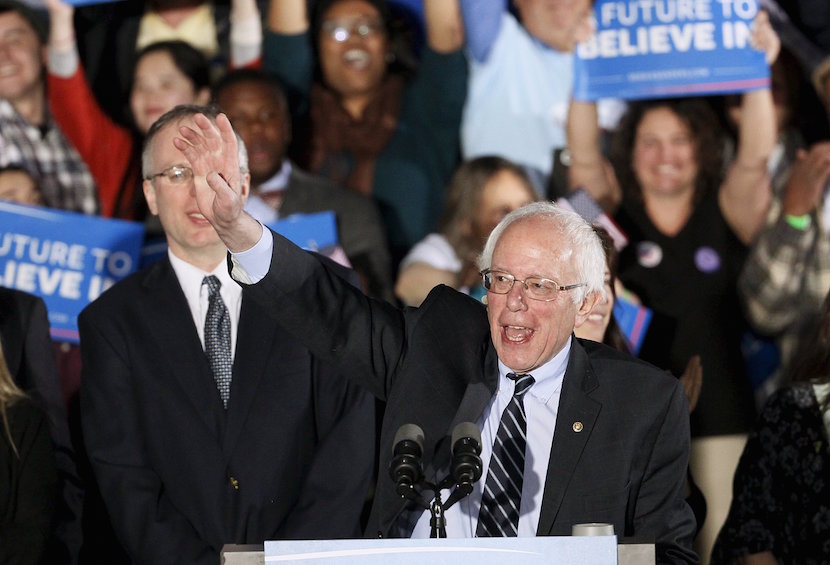 It might be a little early to call a global backlash against the political establishment, but from what Americans are telling us in early stages of their Presidential Election, it certainly looks to be heading that way. Voters on both sides of the nation’s political spectrum are weighing in for the candidates who promise to revolutionize US politics – Democrats becoming increasingly supportive of straight shooting Bernie Sanders and Republicans putting brash billionaire Donald Trump far ahead of his rivals. This swing to forthright candidates possessing a touch of the extreme has come at a time when the public is kicking back against an increasingly distrusted political establishment. Although widely predicted, like any radical swing, few really believed it would happen, or at least not this soon. From what happened yesterday during voting in the state of New Hampshire, the revolution looks like it may have started. – Alec Hogg

With Tuesday’s results, voters in both parties sent a rebuke to establishment presidential candidates by embracing Trump and Sanders — a billionaire and a Democratic socialist — who both spoke to voter anger and anxiety about rising income inequality and a gridlocked Washington.

The biggest loser of the night was Clinton, the Democratic front-runner who won the state in 2008 only to suffer an embarrassing loss in a race that was called when the polls closed at 8 p.m. Eastern. Her campaign manager, Robby Mook, issued a memo designed to tamp down any panic among supporters by asserting that she is still the favorite for the nomination.

Clinton congratulated Sanders on his victory in her concession speech in Hooksett and vowed to battle on, saying she knows how to get results voters are demanding.

Sanders, in his victory speech, said the results “sent the message that will echo from Wall Street to Washington, from Maine to California” that wealthy donors and Super PACS don’t control the country.

Trump re-assumed his front-runner status in the Republican nominating contest after finishing second in the Iowa caucuses on Feb. 1 to Texas Senator Ted Cruz, despite leading state and national polls for months. Kasich emerged as the runner-up to Trump on Tuesday in a fight among Republicans trying to establish themselves as the alternative to the billionaire and Cruz.

Sanders’ victory in the first-in-the-nation primary, after his razor-thin loss to Clinton in the Iowa caucuses on Feb. 1, means the party could be headed for a long and competitive nominating fight.

In a statement released right as polls closed, Mook said splitting the first two contests was “an outcome we’ve long anticipated.” The campaign is focusing now on contests in Nevada and South Carolina and states that better reflect the diversity of the party, “and we feel very good about our prospects for success,” Mook said.

“The nomination will very likely be won in March, not February, and we believe that Hillary Clinton is well positioned to build a strong – potentially insurmountable – delegate lead next month,” he said.

While her campaign tried to dismiss Sanders’ pre-vote lead in New Hampshire as the “home-field advantage” of a New England candidate, polling data showed that Clinton had lost support since 2008 among women — especially young women — as well as blue-collar workers and those earning less than $50,000 a year. It showed why Sanders’ message of a rigged economy benefiting the wealthy is resonating.

With about 43 percent of precincts reporting, Sanders was holding onto 59 percent of the vote with Clinton carrying 38 percent. Trump was capturing 34 percent of the Republican primary vote. Kasich had 16 percent to seize second place ahead of a tightly bunched group made up of Cruz with 12 percent and former Florida Governor Jeb Bush and Senator Marco Rubio with 11 percent. New Jersey Governor Chris Christie, who staked his fortunes on New Hampshire, trailed with 8 percent.

Following his loss in Iowa, Trump’s campaign faced criticism that he didn’t have a competitive political operation to compete with other campaigns. Some also questioned whether his preference for large scale, stadium-sized rallies was personal enough in early-contest states, where voters place premiums on retail politics.

In the days leading up to the New Hampshire primary, Trump got local. Besides large scale rallies, he campaigned in local diners and police stations.

Still, Trump didn’t shift his tone. On the eve of the primary, Trump repeated a vulgar term about Cruz that was first uttered by someone in the crowd. His remark was widely circulated on social media and grabbed cable news headlines.

The battle for second place behind Trump featured a fight among as many as five Republicans, including three current or former governors staking their campaigns on a strong showing in New Hampshire.

Coming out of Iowa, Rubio’s strong third-place finish set him up for another big night in New Hampshire. But after a debate stumble Saturday, other Republicans tried to slip in behind Trump, including Kasich, Bush and Christie.

New Hampshire historically serves to narrow crowded presidential fields, like this year’s Republican contest, but the volatile nature of the race could take the nominating fight in both parties well into the spring. In fact, most of the Republicans who competed in New Hampshire seem sure to go on to the next contest in South Carolina on Feb. 20.

The New Hampshire secretary of state had predicted a record turnout, thought to favor Sanders and Trump in attracting first- time voters who back them. The Republican race was marked by about half of voters who said they were undecided before balloting began, as well as the uncertainty of having 44 percent of registered voters who were officially undeclared and able to vote in either party’s primary.