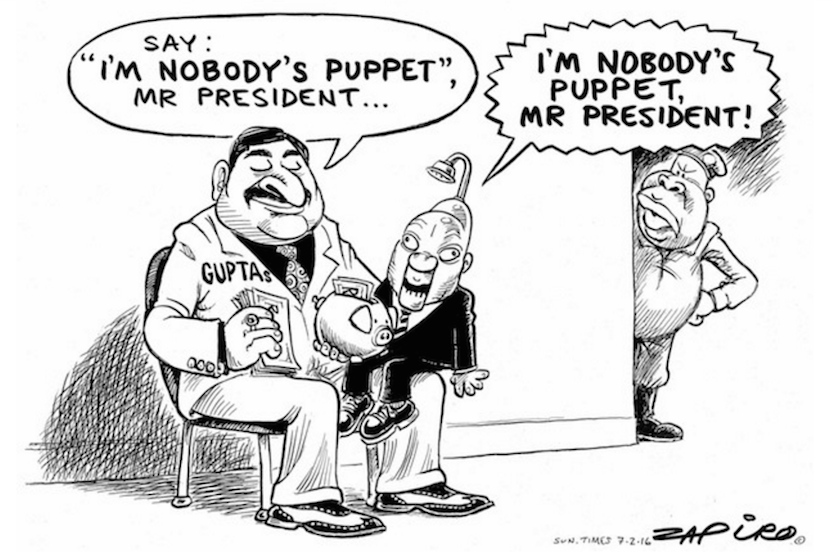 The timing of the release of the 25 reasons the Guptas should leave South Africa preceded an urgent interdict taken to the courts by the Guptas against the Economic Freedom Fighters and Julius Malema for threats of violence. The Gupta family went on to win that interdict. The interdict was to stop the threats of violence but the EFF says it doesn’t incite violence through physical removal but merely states why they should go. It’s an in-depth list that puts the Guptas at the heart of President Zuma’s decision to remove both ministers Ramathlodi and Nene, and will most likely confirm a lot of what’s already been questioned in the press. The full list was initially released on the official Economic Freedom Fighters twitter handle and is below. As always straight shooting from Julius Malema and his crew. – Stuart Lowman

Johannesburg – The Economic Freedom Fighters have released a list of 25 reasons why the “Guptas must leave or be made to leave the country”.

According to EFF’s official Twitter account, the list was released on Tuesday morning at 06:38 – a few hours before the High Court in Pretoria granted the Gupta brothers an interdict against its leader Julius Malema and his party.

However, newsrooms – including News24 and Netwerk24 – received the list via email at on 10:36 on Wednesday. The EFF could not immediately explain why it was emailed to newsrooms only a day later – and the day after the interdict was granted.

On Tuesday, the same day the EFF asked the Constitutional Court to rule that President Jacob Zuma should pay back a portion of the money spent on upgrades to his Nkandla homestead, the Gupta brothers secured a court order in a separate court against Malema and his party.

The court interdicted Malema and the EFF from participating in any conduct or promoting the removal of the Guptas from Gauteng or South Africa, as well as inciting any violence against the family and its employees.

EFF spokesperson Mbuyiseni Ndlozi told News24 via SMS on Wednesday that the list did not incite any violence.

But when asked whether sending the list following the court’s decision on the matter constituted a breach, Ndlozi replied via SMS: “We were asked to explain why we think Guptas must go, we are participating in the discourse…

“We have not spoken about physical removal, but why they must go.”

Nazeem Howa, CEO of the Gupta’s Oakbay Investments was not immediately available for comment.

In the list, headlined “25 Reasons why the Guptas must leave or be made to leave the country immediately #Guptasmustgo”, the EFF makes a range of accusations against the family and their relationships with government officials, President Jacob Zuma, parastatals and the ruling party. – News24

25 REASONS WHY THE GUPTAS MUST LEAVE OR BE MADE TO LEAVE THE COUNTRY IMMEDIATELY #GUPTASMUSTGO No 4. In their network of influence, they have premiers of the Free State and North West provinces, ministers, chairpersons and Chief Executive Offices of state-owned enterprises. They also have control over many critical decisions that they, and the puppets they control, financially benefit from. #EFF #VoteEFF