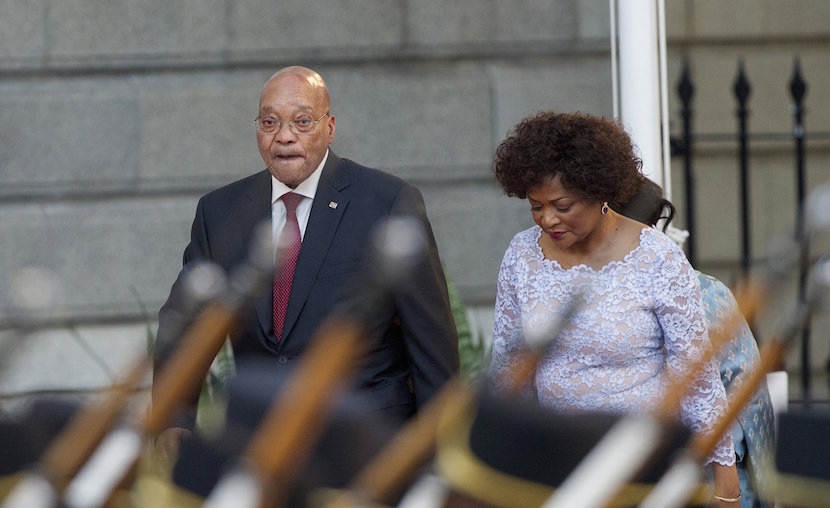 Thirty years ago, in his infamous “Rubicon” speech, President PW Botha blew the opportunity to oversee South Africa’s inevitable transition to democracy. The West’s political leadership, banks and thought leaders in the media had been prepped for announcements which never came. Their disappointment sparked demands for repayment of foreign loans, forcing SA into a five year debt standstill it couldn’t afford, hastening the end of Apartheid. After high level meetings between Government and business last Sunday and again on Tuesday, hopes were high ahead of President Jacob Zuma’s SONA speech last night – the rand appreciating 22c against the US Dollar running up to the event. It gave all that up, and more, as Zuma set about delivering what for the markets was simply another “business as usual” address. This was no disappointment of Rubicon proportions. But it was most definitely an opportunity lost – as the top London-based investment analyst covering SA explained in the note he sent clients last night. – Alec Hogg

Much had been promised in the run-up to the event, with some business leaders even suggesting they had effectively helped to write President Jacob Zuma’s speech. If they really believed that, then they are delusional.

The only evidence of the past week’s meetings was Zuma’s highlighting the importance of the financial sector to SA – a conclusion he doubtless drew from Tuesday’s meeting where the business sector’s three presentations were made through by the CEOs of Standard Bank, Old Mutual and Nedbank.

Montalto, the highest rated of the London analysts covering SA, worries that SONA gave limited recognition to the real issues: “We did not see any meaningful microeconomic structural reforms to give more hope on growth to investors or, more important, to ratings agencies. As such, our low expectations were broadly met, but local expectations, which were looking to give the benefit of the doubt, are likely disappointed. There was no “rabbit out of a hat” moment.”

Within the ANC, what was contained in the address was viewed rather differently. Minutes after SONA ended, ANC General Secretary Gwede Mantashe told television reporters that by concentrating on the economy, Zuma’s speech would satisfy ratings agencies and ensure the country’s debt avoids falling to “junk” status. He is clearly afflicted by the old problem within the ruling political party that simply saying something means it will be done – and that despite the ANC’s shocking record on execution, audiences will swallow the story.

From Montalto’s perspective SONA providing nothing meaningful: “There was no sense of urgency or crisis on the lack of job creation forecast for this year. Indeed this is a factor we have commented on throughout the last year from our interactions with the ANC and something which seems not to have changed. True, the speech was ‘sombre’, but we think this reflects more the personal political pressure Zuma is under as opposed to recognition of the errors of Nenegate or the state of the economy.”

He adds: “The broad sense was of a speech written in parts heavily by National Treasury to make the right noises. This came through, as expected, in talk of belt tightening, the need for tax increases to cover revenue shortfalls, and expenditure cuts and difficult decisions. Similarly, we think mention of better parastatal management was also down to Treasury.

“However, through these parts written by National Treasury came the sense of the rest of government and the Presidency continuing with business as usual. There were no shock-and-awe moments to show decisiveness, no pulling of rabbits out of a hat to show a different way of thinking, and no recognition that business as usual was insufficient. On top of this, expectations were built up a lot, particularly for locals ahead of the SONA, but it seems they are being disappointed.”

The most disappointing part for the investment community is the supposed new-found political clout of reinstated Finance Minister Pravin Gordhan appears overstated. Montalto writes: “We think the SONA shows that Pravin Gordhan does not have as wide ranging remit over wider government policy as people had come to expect. Additionally, it shows that government does not understand that fiscal is not enough to save the country from sub-investment grade, but it is a mind-set change that is needed on microeconomic policy that was not evident here.”

His conclusion – SONA is “negative for ZAR and SA assets in the medium run” and that there is nothing in it to change his prediction that South Africa’s debt will be dropped to Junk status in the next 18 months. Sorry Gwede. It appears that you have miscalculated, Much, more more is needed to turn the listing ship around.