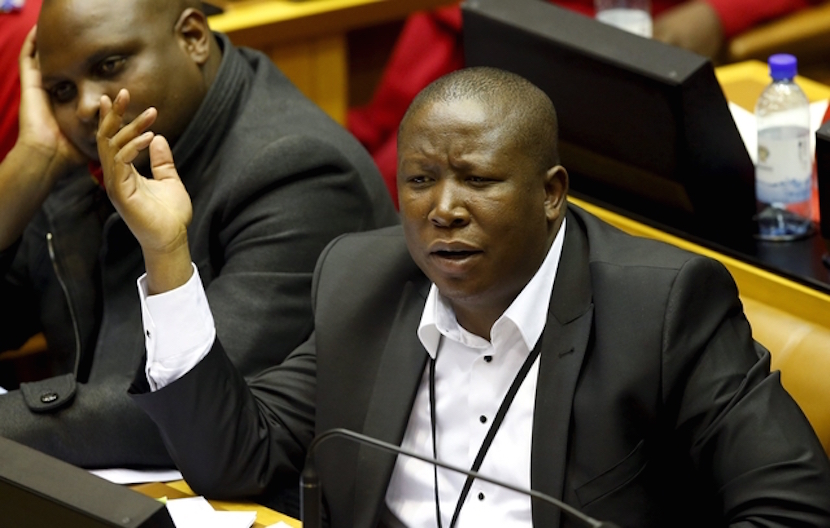 EFF leader Julius Malema’s flirtation with rational economics is clearly over. After a successful visit to the UK late last year where he offered thoughts that went down well with potential foreign investors, the feisty political entrepreneur has reverted to his roots. During a lengthy interview with the Financial Times of London, Malema punted Venezuela (which tops the global misery index) and Cuba (a time capsule from the 1950s) as role models for South Africa. Then on Friday, and at a well publicised debate with Clem Sunter in Cape Town, he proposed another populist route to disaster via Zimbabwe-style land grabs without expropriation. Malema has the charisma and courage to be part of a troubled South Africa’s solution. Pity he remains stuck in the quagmire of failed Soviet-inspired dogma. – Alec Hogg

“The state must take a deliberate decision to nationalise the land and redistribute it for equal use [for everybody],” Malema told members of the Cape Chamber of Commerce and Industry (CCCI) over dinner at the Cape Sun hotel.

Malema was sparring with economic futurologist Clem Sunter in a two round debate called “The rumble in the urban jungle”.

Executive Director of the CCCI Sid Peimer opened the bout saying  that it was essential for business to come to terms with different future scenarios and how it would affect business opportunities and job creation.

“If people want to buy the land and there is no willing seller we will never own a piece of land … it does not matter how much money we have,” he said.

According to Malema there was a need for the expropriation of land without compensation to address South Africa’s increasing inequality gap.

He sketched a future scenario in which legislation would be passed in Parliament indicating that the state was the owner of the land and “the land shall be allocated to people who have indicated what they want to do with the land” and a decision made on whether that  was in the public interest.

The main thrust of Sunter’s argument was the development and promotion of entrepreneurship in South Africa.

He said a million new businesses were needed to create five million jobs.

According to Sunter the high level of mechanisation in the modern economy has removed a high level of jobs out of the system and the employment model has changed resulting in high levels of contract labour.

Sunter proposed that every big business should have 20% of its supply chain devoted to nurturing the new generation of small businesses.

“We should identify in every township economy the top 1000 entrepreneurs and advise them on how to extend their business into the mainstream economy… we have to focus on small businesses,” he said. – Fin24

Cape Town – A woman attending a Cape Chamber of Commerce debate challenged EFF leader Julius Malema over his statements about land saying he did not have authority over the issue.

“Mr Malema, you have no authority to talk about land.

“The Khoisan is the only authoritative voice which can talk about land,” she said to loud applause and some cheers.

The woman said the Khoisan were the “first freedom fighters” who fought the colonials when they came here 360 years ago.

She said the country’s history did not start in 1910 when the ANC was formed.

“We lived here and you, your ancestors, and the white ancestors found us here. Only we can talk about land ownership.”

Malema told the woman that he thought she was “extremely missing a point”.

“Me and you are Africans and this land you are referring to and the whole of Africa was one thing until the colonialists came to divide us.

“So you must never see yourself as being something different from what I am.”

He said she was “inviting self-isolation”.

Malema said the black African majority and the Khoisan were one.

Malema was taking part in a debate with scenario planner Clem Sunter in Cape Town, a day after the State of the Nation address. – News24