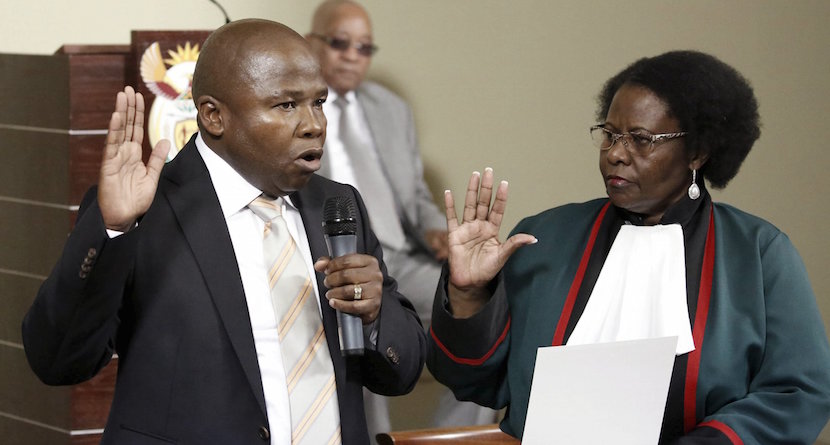 South Africa’s President Jacob Zuma eschews books. Which is unfortunate because if he paid them more attention, he’d be able to learn much from the icons of his trade. Like the US’s greatest President, Abraham Lincoln, who is credited with the wisdom that it is “Better to remain silent and be thought a fool than to open your mouth and remove all doubt.” Zuma’s insistence that he was right to catapult backbencher Des van Rooyen into the Finance Ministry is embarrassing. Up there with his awful off-script rendition the night he fired Van Rooyen’s predecessor Nhlanhla Nene. Despite the R500bn hammering global investors gave the country’s currency, stocks and bonds over Nenegate – and the permanent “Zuma discount” which remains – SA’s President continues to rail against those who criticise his appointment of Van Rooyen. The latest salvo, claiming Van Rooyen is better qualified for the position than either incumbent Pravin Gordhan or the respected Nene beggars the belief of any rational being. But whatever else he might possess, rationalist is clearly not Zuma’s strong suit. Perhaps the humiliated king of Nkandla is lining the nation up for another special surprise? As long as he stays in the Presidency, anything could happen. Remember, this is the man who told a live national television audience that Africa is not only the biggest continent (into which all others would fit) but the only one not divided by a river. And truly believes the guff he was spouting. The Nile, at 6 853km, is the longest river in the world. Denial is not a river in Africa. – Alec Hogg

Pretoria – Des van Rooyen was the most qualified person to be appointed to the position of finance minister, President Jacob Zuma said on Monday.

“That thing caused such havoc and people think Zuma just woke up one day and took a decision,” Zuma told political reporters and editors at the Union Buildings in Pretoria.

“You know Des van Rooyen is my comrade, MK for that matter, he’s a trained finance and economic comrade and more qualified than any minister I have ever appointed in the finance issue.”

Zuma was speaking to the group at the launch of the Presidential Press Corp (PPC).

In December, Zuma faced a backlash after he announced that he was replacing Finance Minister Nhlanhla Nene with Van Rooyen, who was an ANC MP.

There was a public outcry and calls for Zuma to be recalled over the move, which saw the rand reach record lows.

Zuma on Monday said as president he took decisions, which was his constitutional right.

“They want to take decisions on behalf of the president, at times including some in the media, not everyone,” he said.

“You may not know why I took that decision, you might get very good reasons why, but if you don’t know you speculate on the basis of what you see, when there might be very serious reasons,” he said without giving any further details. – News24