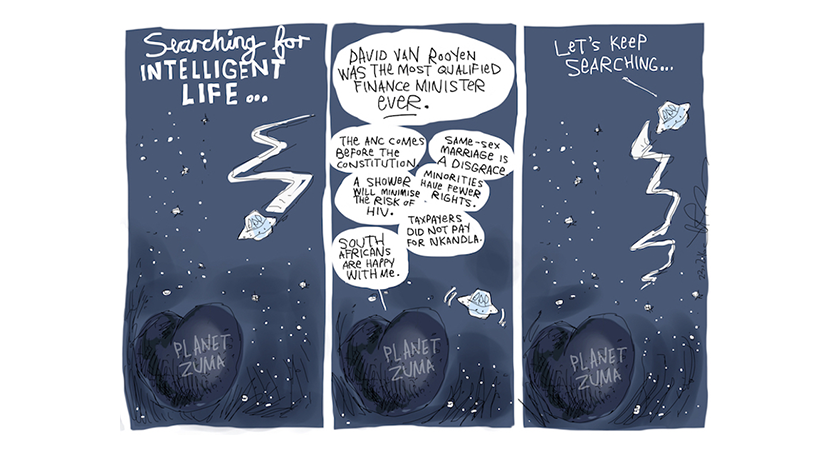 Some things only make sense with hindsight. On Monday, most South Africans were amazed at President Jacob Zuma’s claim his “Weekend Special” Finance Minister Des van Rooyen was the best he’d ever appointed. No longer. It is now clear this was Zuma’s ham-handed attempt to prepare the nation for another financial shock. Unless the President backs down on another of his strange deployments. the country’s reappointed Finance Minister Pravin Gordhan will quit. In a letter last week, Gordhan drew a line in the sand over Zuma’s injection of Tom Moyane as the Commissioner of SA Revenue Services. Moyane was appointed soon after Zuma fired Gordhan in 2014, and spent the next year systematically dispatching the respected SARS executive team Pravin had built. We will soon know whether the new Finance Minister is indeed “unfireable” as those controlling the fund flows in global markets currently assume. The public disclosure of Gordhan’s ultimatum also provides perspective on an answer he gave during the press conference in the pre-Budget lockup. Asked whether he now possesses the political clout to effect proposed reforms, Gordhan responded with “We’ll only know about that if I’m still sitting in this seat in October” when the mini Budget is tabled. Most of the 120 journalists chuckled. Gordhan, with hindsight, was deadly serious. – Alec Hogg

Gordhan issued the ultimatum to Zuma last weekend before his budget speech to parliament on Wednesday, because of a serious deterioration in his relationship with Tom Moyane, commissioner of the South African revenue service, the Johannesburg-based newspaper said.

The tax authority has been rocked by the resignations of several senior executives since Moyane took office in September 2014. Local newspapers have reported a range of allegations of wrongdoing by the executives who served during Gordhan’s tenure as commissioner of the authority between 1999 and 2009, including that the Revenue Service operated a “rogue” unit that spied on political leaders, including Zuma.

In a recent incident, a special investigations unit of the South African Police Service questioned Gordhan by letter about his knowledge of the unit, Business Day said.

“It’s no secret that we have a set of issues to resolve in this institution,” Gordhan told reporters in Cape Town on Wednesday when asked why Moyane was absent from budget press conference. “In due course we’re confident that we will resolve those issues and the public will get to know about how we are resolving them.”