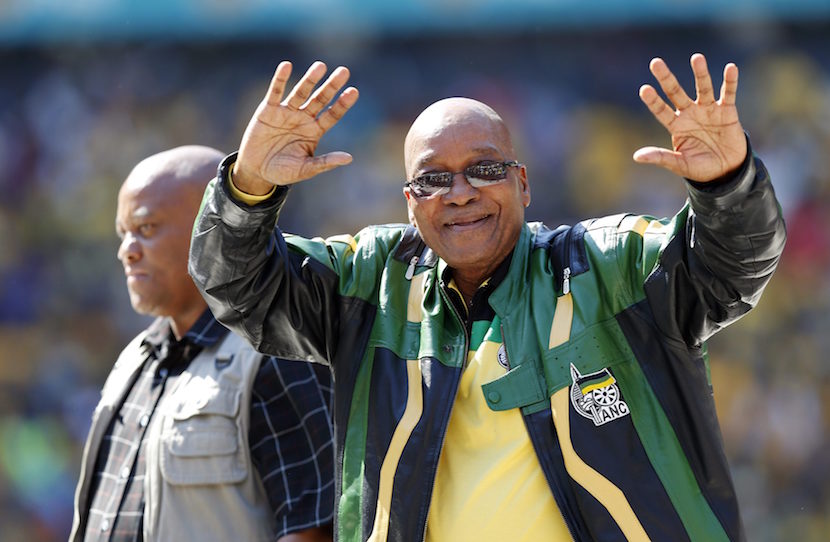 The way former ANC firebrand Andrew Feinstein tells it in his excellent book “After the Party”, now President Jacob Zuma initially encouraged him to dig into corruption around the 1998 Arms Procurement Deal. But as Feinstein’s investigations started turning up more muck, his one-time Champion withdrew his favour. Not long afterward being stonewalled from on high, Feinstein was replaced as the ANC’s head of the public spending oversight committee. A few months later he resigned, very publicly, and relocated to the UK. The cudgels were then taken up by erstwhile ANC heavyweight, Bulelani Ngcuka, then head of the National Prosecuting Authority. He publicly announced there was a “prima facie” case of corruption against Zuma, but wasn’t confident of being able to win the case in court. Soon afterwards, the husband of former Deputy President and now UN Top Five executive Phumzile, branded him an Apartheid double agent, an allegation of which he was subsequently cleared. But by then Ngcuka had left the NPA. Now comes the third attempt to link Zuma with the notorious plundering of the public purse in the guise of bolstering SA’s military defences. The Official Opposition, the Democratic Alliance, is making the case in court that Zuma abused his power by having the NPA drop Arms Deal corruption charges against him. Zuma’s lawyers claim he has all along been the victim of a political conspiracy engineered by his Presidential predecessor Thabo Mbeki. This is the first of two critical court actions brought against the king of Nkandla – the other, perhaps equally career threatening, is awaiting the Constitutional Court’s judgement. Whatever the verdicts, having the President challenged this way proves that nobody is above the law in a functioning Constitutional Democracy. Something which, right now, is an asset many South Africans are grateful the nation can draw upon. – Alec Hogg

Cape Town – President Jacob Zuma’s lawyers are holding fast to their contention that he was the victim of a political conspiracy and abuse of power when he was charged with corruption relating to a multi-billion rand arms deal.

And, they argue in court papers, that the DA’s application on Tuesday for a review of the decision to drop the charges is nothing more than another abuse of process by a political minority which is opposed to him.

It was all part of a massive factional battle within the ANC between supporters of Zuma and supporters of Mbeki, the lawyers continue in argument to be tested in court.

Zuma’s lawyers submit that the former head of the DSO, or the disbanded Scorpions, Leonard McCarthy, had regarded even the prosecutors as ”foot soldiers” in the battle against Zuma since 2001.

On April 6, 2009, then National Director of Public Prosecutions (NDPP) Mokotedi Mpshe announced that the National Prosecuting Authority had received written and oral representations by Zuma’s lawyers.

He had also been given a recording of a conversation to fortify its claim that there was a plot against Zuma.

Mpshe said he was convinced that there was evidence of an abuse of process against Zuma during the prosecution and that the charges would be dropped.

On April 7, 2009, the charges against Zuma were withdrawn in the High Court in Durban and after the elections later in April, it was announced that the ANC had retained its majority. Zuma was sworn in for his first term as president that May.

The president’s lawyers believe the case against him is now dead, and disagree with the DA’s contention that if the court rules in its favour, the charges can be reinstated.

They argue that Zuma has had to deal with constant leaks, speculation and commissions of inquiry – all at the hand of McCarthy, who left the Scorpions to join the World Bank when Mbeki lost his bid for a third term at the presidency.

After Zuma’s financial adviser Schabir Shaik was found guilty of facilitating a bribe from arms company Thint to Zuma, the speculation about Zuma increased, they argue.

It was unfair to just have charged Shaik and not given Zuma chance to defend himself.

The reporting on the controversy was fed from leaks from the NPA, and included a secret meeting with black editors.

”The obvious invasion of Zuma’s fair trial rights, and trial prejudice, as a result of all this, are manifest.”

They continued: ”It is virtually impossible to fairly try Zuma in these circumstances.”

The DA wants the court to decide whether the decision was based on sound legal thinking or whether it was political.

There have been at least 18 court cases directly related to the claims that Zuma received over R1 million in a bribe from French arms company Thint to influence the multi-billion rand arms deal which was signed in September 1999. The DA said it had spent around R10 million getting to the review application.

It said the delays in bringing the application were mainly caused by Zuma and the NPA. It finally got a copy of the ”spy tapes” – a flash drive of the recordings which purportedly support Zuma’s conspiracy claim – and had to wait over a year for a date.

If the DA wins the case – that it was a political decision – it could pave the way for the NPA to reinstitute the charges.

This decision would be made by the current NDPP Shaun Abrahams.

Although drawn out, the case is still within the 20-year limit to prosecute. – News24

29 November 2002: The Mail & Guardian reports Jacob Zuma is being investigated (Zuma was not president yet).

23 August 2003: Former National Director of Public Prosecutions Bulelani Ngcuka says there is a prima facie case against Zuma, but it can’t be won.

7 September 2003: City Press runs a story headlined: ‘Was Ngcuka a spy?’ saying the ANC had investigated him during the ’80s on suspicion of being a spy. The Hefer Inquiry can’t establish this and the claim that he misused the prosecuting authority falls away.

2 June 2005: Zuma’s financial adviser, Schabir Shaik, is found guilty on two counts of fraud and one of corruption.

18 December 2007: Zuma beats Mbeki to the post of president of the ANC.

May 2008: Scorpions boss, Leonard McCarthy, claimed by Zuma’s lawyers to be the man driving the prosecution against him, resigns and leaves for a job overseas.

12 September 2008: Judge Chris Nicholson grants Zuma’s application to have corruption charges dismissed and agrees there are signs of a conspiracy.

20 September 2008: Mbeki stands down as president. Kgalema Motlanthe holds the fort until elections in 2009.

12 January 2009: The Supreme Court of Appeals sets aside Nicholson’s judgment and Zuma has to go back to the drawing board.

10 February 2009: Zuma’s lawyers start representations to the NDPP to present new reasons not to go ahead with the prosecution.

20 February 2009: Oral representations made to the NDPP.

6 April 2009: Mpshe announces that charges against Zuma will be dropped. He reads transcripts of phone conversations between McCarthy and Ngcuka, who at one stage says to McCarthy, “you made my day”, after finding out that Zuma will be re-charged.These phone conversations are part of the so-called “spy tapes”. The DA is asking the High Court in Pretoria on Tuesday for a review application of the decision to drop the charges against Zuma, arguing it was an irrational decision.

7 April 2009: The case against Zuma is withdrawn in the Durban High Court.