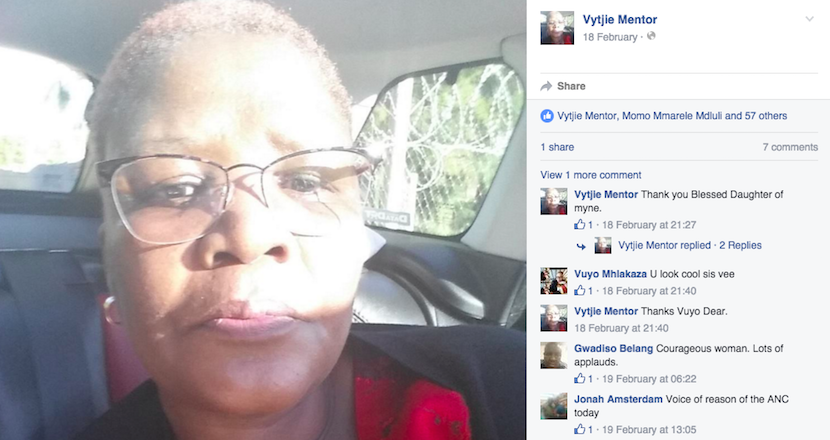 It was on the Ides of March that Romans assassinated a would-be Emperor whose power lust destroyed their Republic. So it is rather appropriate that on the same day, March 15, the public action of a little known politician is set to destroy South Africa’s modern-day Caesar. In this context, it is important to understand that Vytjie Mentor is like most long-serving ANC cadres. Drawn to the party by a calling to help her fellow citizen, she is a decent person with more than a touch of idealism. She is like many of those serving this young democracy. What made Mentor’s case unusual is how the forces of evil underestimated her commitment, as they clearly did with the man who inspired her “coming out”, Deputy Finance Minister Mcebisi Jonas. Earmarked as an easy touch, she instead rejected the promotion because it came at too high a price and from the wrong source. Vytjie says she is only speaking up now because she thought hers was an isolated incident. Her courage, and that of Jonas, is sure to break the conspiracy of silence they unwittingly joined. Their disclosures are perfectly timed with the ANC’s National Executive Committee meeting over the next few days. Political analysts, including those who advise money managers abroad, are confidently predicting the ANC will back its compromised President. They assume too many cadres have been bought by Zuma and the Guptas – so they will ignore or differently interpret actions which Deputy Finance Minister Mcebisi Jonas describes as striking at the heart of SA’s “hard earned democracy, the trust of our people.” My experience of those involved suggests a different outcome. There are far more Barbara Hogans, Pravin Gordhans, Nhlanhla Nenes and, indeed Vytjie Mentors in the movement than “Gupta boys”. For the first time, they know the whispers are not just malicious rumours. I’m confident the pundits have miscalculated, that this weekend the ANC will show a renewed determination to regain its moral compass, to excise the cancer of cronyism and patronage. Those who hold Zuma’s career in their hands, after all, have families, friends and communities they must answer to. They know the Zupta spin is utter rubbish. And, these are people who for the most part, also kneel before their Higher Power and are guided by their conscience on the important decisions. The ANC will do the right thing. The future of Mandela’s nation requires it. – Alec Hogg

Johannesburg – “Assist with SAA not running the Indian routes anymore… you will become a minister in a week,” former ANC MP, Vytjie Mentor was allegedly told by the Gupta family during a private meeting she said.

In an interview with Power FM, Mentor said the Gupta family sat her down and told her it would only take a week for her to become the next Minister of Public Enterprises if she agreed to their terms she said.

This while President Jacob Zuma was in another room.

Mentor said 15 minutes into the meeting with the Gupta’s she declined the offer and went to tell Zuma she could not accept.

“I said to him Mr president I have just been asked to do this and I can’t do it. I thought I was going to meet you,” she said.

Mentor said the president announced the reshuffle which involved then Minister of Public Enterprises, Barbara Hogan a few days later. “When I heard on radio my blood coagulated.

“I was hoping upon hope that they were trying to trick me into a situation. There is no way that they can know ahead of time. It only dawned on me when I heard on radio that indeed they (Gupta’s) knew their story,” she said.

Mentor said Zuma took the decision to decline the offer by the Gupta’s very well. “The president did not take offence to me saying I’m disgusted and I cannot agree. He said I understand Ntombazana [girl], its a pity you had to come in crutches, look after yourself,” she said.

Mentor said the first person to raise the issue of Gupta influence in the ANC was the then ANC Youth League leader Julius Malema, she said before Malema raised the problem of the Gupta’s she thought their offer to her was an isolated incident.

“The first person to raise this in the ANC was Malema. You don’t just jump on the band wagon. I thought its an isolated incident they are trying their luck,” she said.

Mentor asked South African to pray for her. “My umbilical cord is buried in South Africa, the Gupta’s are buried internationally… To capture a state or to attempt to run a parallel state is treasonable. I love the ANC but I love South Africa more. I just want South Africa to pray for me,” she said.

On Monday night, Mentor said in a Facebook post that she had been offered a job by the Gupta family.

She wrote: “But they had previously asked me to become Minister of Public Enterprises when Barbara Hogan got the chop, provided that I would drop the SAA flight-route to India and give to them. I refused and so I was never made a Minister. The President was in another room when they offered me this in Saxonworld. [sic]” – News24