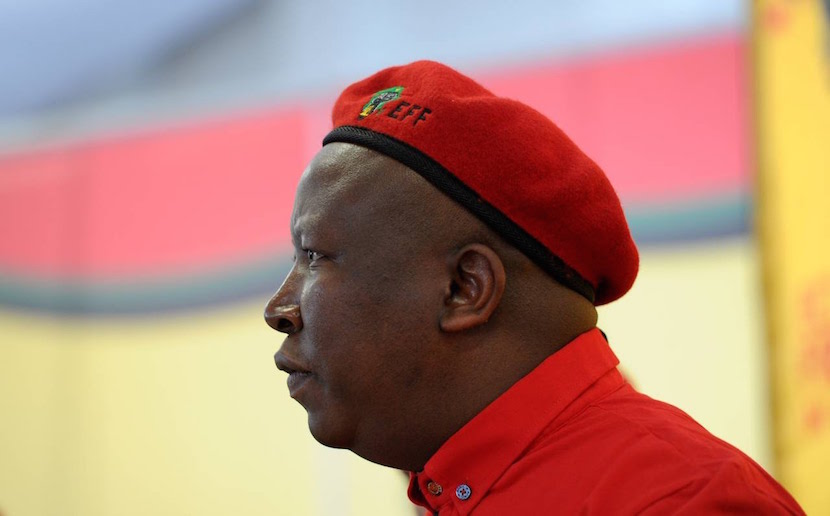 Strange things are happening in this young democracy. A weekend back, burglars broke into the democracy-promoting Helen Suzman Foundation to steal notebooks and computers, ignoring valuables. The clumsy break in, commanded by a phone-carrying woman taking telephonic instructions, came four days after the HSF applied for an interdict to suspend the head of the Hawks, SA’s supposedly independent police investigations arm. Yesterday, the feisty leader of the Economic Freedom Fighters Julius Malema, was blockaded and then surrounded by gun toting policemen at one of Johannesburg’s busiest traffic intersections. This bizarre incident came two days after Malema alleged President Jacob Zuma was the bag-man who transported R6bn to Dubai for his family’s business associates, the Gupta family. As the statement from the EFF illustrates, Malema and his compatriots are furious, claiming it was an attempt to intimidate him, proving that he is being tailed. The cops claim it was all just a mistake. – Alec Hogg

From the Economic Freedom Fighters

The Commander-in-Chief and President of the Economic Freedom Fighters, Julius Malema, was tonight (Sunday) stopped by a white unmarked van just by the Grayston drive offramp in Sandton & immediately surrounded by plus/minus 10 police cars. The police then all came out pointing guns at his car and forced him out. The entire intersection at the Grayston Drive offramp was blocked, isolating him from the rest of the traffic.

The CIC Julius Malema got out and the police all did nothing, claiming it was a mistake. He forced his way around the police cars, driving over the pavements and drove off.

The EFF takes this as a clear act of intimidation and demonstration that the enemy is following our CIC Julius Malema around. The CIC was from Soweto, attending an EFF Manifesto Launch Preparatory Meeting. We believe that the white unmarked van which stopped him first could have been following and tracking him from Soweto.

Now that their criminal charges and SARS cases were not successful to subdue the rising Lion of the North. Now that they failed to stop him from building what has become the largest left revolutionary movement in the country in form of the EFF. Now that even the highest courts of the country have given rulings of no confidence in the government of the day due to the relentless, brave and uncompromising fight that the CIC Julius Malema has sustained, the enemy is going for his security, physically seeking to subdue him into fear.

If the enemy thinks harassing our CIC Julius Malema will subdue him or the EFF they are lying. We want to send a strong message to them that we are unshaken and declare that their days in government are numbered. The spirit of the people of South Africa is awaken for good and no amount of security threats, particularly using the venomous, blood thirsty security forces, will ever silence it.

The bravery of our CIC Julius Malema is stronger than 10 million armies. He is the generational gift that not only this country, but the continent and the world will benefit from. If the people of South Africa can take the murderous apartheid regime down, this zombified, kleptocratic government is nothing.

The people of South Africa and the world must know that the regime is turning violent. We shall keep them updates on each and every incident, because they must know the conditions we are operating under. We wish to also reiterate that we shall stop at nothing to defend our constitution. We are prepared to defend it, using whatever revolutionary means possible, we are not scared.