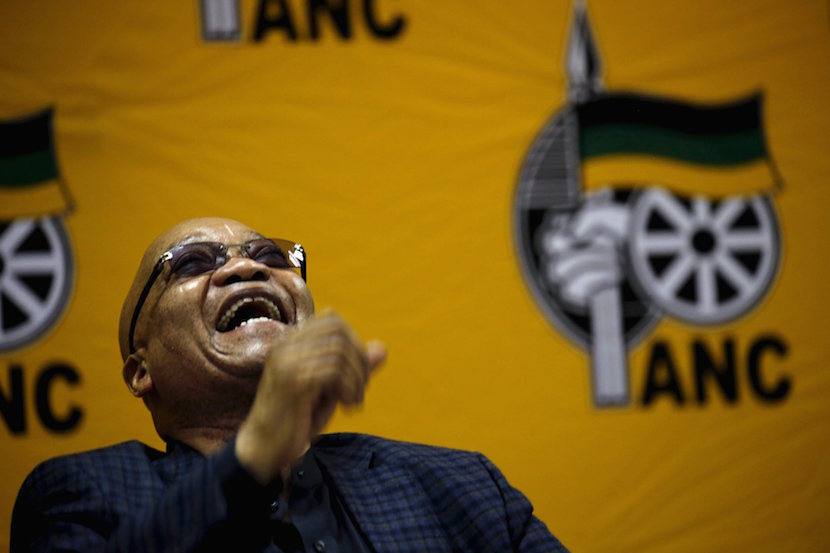 South Africans received full value from their politicians yesterday. Millions who tuned into the live broadcast of Parliament’s impeachment debate were treated to a couple hours of competitive politics – opposition leaders Mmusi Maimane and Julius Malema in full cry, solidly supported by their party’s members. The result was never in doubt. Jacob Zuma retained his Presidency thanks to the majority ANC closing ranks. But you’ll rarely see a more miserable bunch than those whose votes ensured Zuma keeps his job, for now anyway. The all-seeing eye of live television provided a stark contrast between the two sides of the House. The buoyant Opposition joked, teased and insulted their way through the two hours, ending with a flourish by walking out. The mood on the other side was in stark contrast – the ANC unfortunates charged with speaking up for their compromised President were unconvincing, easily flustered. It is defending the indefensible. They were following the party line of accepting the President’s semi-apology. Not necessarily because the ANC brains trust believes that Zuma was sincere. Rather, it is because they have decided on a defensive strategy of fact-finding and engagement before effecting the only rational decision. The ANC has been weakened through the hollowing out of its once dominant labour ally by AMCU and Zwelinzima Vavi. It is trying to avoid the kind of split that followed its last Presidential recall. Zuma will go. That is the only local option. But the sword will only fall once the bulk of the potentially discontented agree it is necessary. Yesterday’s dreadful performance by the ANC shows this is a high risk option, the ANC is playing Old Economy politics in a New Economy world. Not even its own MPs seem to believe the propaganda which a networked and increasingly discontented nation sees for what it really is. – Alec Hogg

Parliament – President Jacob Zuma lived to lead South Africa for another day after a DA motion to have him removed failed by 243 votes to 133 in the National Assembly on Tuesday.

For the motion to pass, more than 260 MPs needed to vote in favour of it, which would have had to include over 100 ANC MPs voting against the party line.

Opposition MPs tried hard to get the motion to pass, delivering impassioned speeches to the relentless heckling of a group of ANC backbenchers.

Some ANC MPs were, by contrast, uncharacteristically quiet, watching the debate solemnly and listening to Zuma being pilloried by one opposition MP after another.

He said Zuma’s apology had come from the heart, and the fact that Zuma stood in front of the nation and said he could have done better showed remorse.

#eNCAHeadlines After failing to impeach President Zuma, opposition parties now call for independent inquiry into his fitness to hold office.

However the opposition vowed that they would not give up.

DA leader Mmusi Maimane told reporters after the debate that they would not allow Parliament to keep breaking the rules.

Opposition party leaders would work together to lobby South Africa to act against Zuma.

“We stand together in that regard to say we want to demand further action. The message is loud and clear. We are far from finished on this matter. We will take all action to ensure justice is served.”

Cope leader Mosiuoa Lekota said they would not be complicit in the overthrowing of democracy.

He said they would consider whether they shouldn’t approach the Constitutional Court to challenge Executive acts.

The EFF vowed to take Mbete to court for refusing to recuse herself during the debate.

Since then the ANC has had high-level meetings to discuss the judgment and had already thrown its weight behind Zuma ahead of Tuesday’s debate.

Likewise, the DA, who brought the motion, had already said it knew that this would happen.

Maimane said during the debate that the ANC would show South Africans their true character by choosing to defend a “crooked and broken president” and theirs would be a ”fake victory”.

If anyone still thinks that Zuma is the problem rather than the ANC, they must please listen to the debate in Parliament.

“When later today the votes are counted, you will claim a victory. On this occasion, when you win, you will lose. As ANC MPs, you should ask yourself, how many fake victories will you claim?”

He said the majority of South Africans had rejected Zuma’s apology and added that Zuma and ANC secretary general Gwede Mantashe did not think the judgment was a big deal.

The motion came after the Constitutional Court last week ruled that Zuma failed to uphold the Constitution when he did not comply with Public Protector Thuli Madonsela’s remedial action regarding the non-security upgrades to his Nkandla homestead.

The upgrades cost at least R246m and Zuma and the ANC decided that Madonsela’s remedial action that he pay back a portion of the money was not binding. A report by Police Minister Nathi Nhleko also cleared Zuma of having to pay anything.

The Constitutional Court also ruled that the National Assembly failed to uphold the Constitution when it set aside Madonsela’s report.

Calls for Mbete to step aside

The EFF tried to have Mbete step aside for Tuesday’s debate on the grounds that she would be conflicted, with EFF MP Mbuyiseni Ndlozi telling her: “You are a constitutional illiterate.”

When there was a suggestion that the Mbete matter be put to the vote, EFF leader Julius Malema shouted that it was the ANC’s vote in favour of Zuma paying back back nothing that got them all where they were.

“Bloody voting cattle,” he bellowed across the floor.

He said the protector’s powers had always been a grey area and claimed that even current Public Protector Thuli Madonsela was unsure of whether her powers were binding.

“It is the [DA], not the Constitutional Court that is saying that the president committed a serious violation of our Constitution,” he said to howls of disbelief from opposition benches.

He also said there was also nothing wrong with Zuma seeking clarity on Madonsela’s powers.

“There is a difference, whether the DA likes it or not, between an inconsistency and a violation.”

He added that former presidents Nelson Mandela and Thabo Mbeki were also found to have violated the Constitution in the past. Mandela’s case involved the pharmaceutical industry, and Mbeki regarding pardons.

“The president has issued an apology and assured the nation that he acted in good faith and never knowingly acted to violate the Constitution.”

The Treasury was already working on what Zuma would pay back, as ordered by the court.

DA MP James Selfe later said that the public protector had never said she was unsure of her powers.

“She was never confused. It was the honourable deputy minister that was confused. He has been disproved in every court of the land,” said Selfe.

#ImpeachmentDebate: Opposition may not have succeeded in removing Zuma but exposed the ANC conduct.

After the vote, DA MP John Steenhuisen asked that the name of each MP who voted against the motion be recorded.

Five minutes later the whole of the opposition had left en masse, leaving ANC MPs to laud the party’s achievements such as a solar electricity plant, the 46% drop in road deaths during the Easter holidays and a local tyre manufacturing plant, all without the customary interjections and objections from the opposition. – News24

Zuma, whose colourful private life has often overshadowed his status as the leader of Africa’s most industrialised economy, came through the impeachment move thanks to the African National Congress’s big majority in the 400-seat assembly.

But the fall-out from the crisis has engendered political uncertainty which investors fear might yet hasten a credit ratings downgrade by ratings agencies.

Zuma, 73, who was not at the fiery session in parliament on Tuesday, may be safe for now. But his image has been further dented and many believe his trademark charm which has ensured him survival for so long might not be enough to keep him politically afloat indefinitely.

The ANC, which controls almost two-thirds of the assembly, gave Zuma the support he needed as expected, with 233 lawmakers voting against the impeachment motion and 143 voting in favour.

The rand weakened by more than 2 percent, partly on political risk jitters over the vote.

The motion, launched by the opposition Democratic Alliance (DA), led to an emotional debate following last week’s ruling by the court that the president had breached the constitution by ignoring an order to repay some of the $16 million in state funds spent on renovating his home.

“The choice is whether or not you will choose to protect your oath of office that you took here in this house, to protect the constitution, or to serve Jacob Zuma,” Mmusi Maimane, leader of the DA party said.

Strategically, it’s better for the ANC to recall Zuma than for parliament to impeach him. That is a far better option.

ANC lawmakers argued that Zuma had not violated the constitution deliberately and did not deserve to be impeached. But they acknowledged the party had much to do to rebuild its image.

“There has been damage on the part of the ANC. We need to go down on the ground and explain exactly what happened. We still have a lot to do,” ANC chief whip Jackson Mthembu told reporters outside parliament. “We believe him (Zuma). We accept his apology. We think we can now move forward.”

Survivor of past scandals

Zuma had already secured the backing of top ANC officials on Friday, after apologising for failing to repay some of the money spent on his residence.

“The president has apologised and that’s the humility that is necessary for any leader,” ANC General Secretary Gwede Mantashe told 702 Talk Radio, after a wider group of party members met on Monday to discuss Zuma.

Zuma has survived several political and personal scandals, fending off accusations of corruption, influence peddling and even rape before he took office in 2009.

On March 1, he survived his second no-confidence vote in a year over what the DA party called his reckless handling of the economy.

That vote came after Zuma was widely criticised in December when he changed finance ministers twice in a week, sending the rand plummeting and alarming investors.

But the latest scandal is arguably the biggest to hit the president.

In late March, the ANC backed Zuma after a party summit following allegations of political interference by his business friends, the Gupta family.

Zuma has insisted his ties with the Guptas are above board, but the opposition demanded his resignation after senior officials accused the family of wielding undue influence in government appointments and activities. The Guptas say they are pawns in a plot to oust Zuma.

“Politics, economics and the fiscal situation are all things ratings agencies watch out for. South Africans should be aware of that,” Gordhan told Reuters.

“The controversies surrounding Mr. Zuma’s scandal-racked presidency will probably continue for some time yet. This will erode South Africa’s reputation among investors and reduce the government’s ability to push for vital reforms,” John Ashbourne, London-based Africa economist at Capital Economics said.

“I think it’s in all our interest that the President actually steps aside,” Manuel said in an interview published online by the Soweto TV channel.