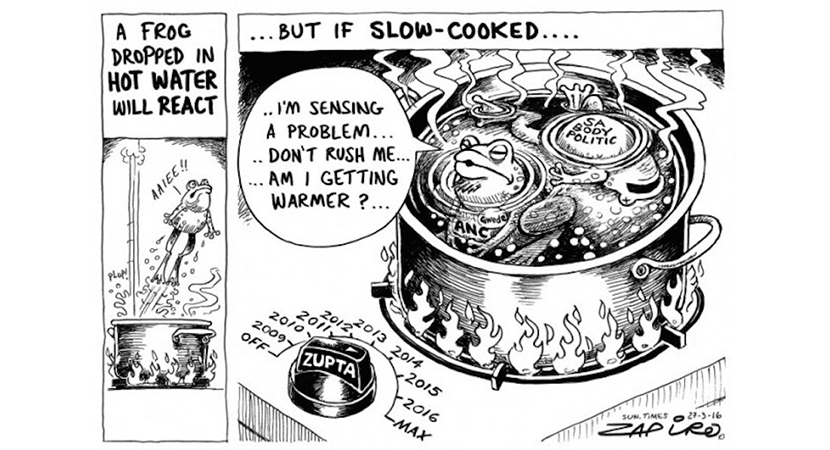 Better late than never, as long as you eventually arrive. But some may argue with the writing already on the wall, the late part is eroding a once majority supporter base. ANC secretary general Gwede Mantashe has finally told the public that given the recent Constitutional Court judgement around President Zuma and the lack of accountability, the people are starting to lose trust in the organisation. But so what, it’s not like anything is getting done about it. And why wait until the picture is painted at the August municipal elections, when change can in effect happen sooner. The party says it wants to sort out the problem in its own time and not be pushed by opposition parties but now that the Guptas have literally done a runner, surely something has got to give sooner rather than later. They wouldn’t want to leave it too late that by the time they arrive, the party is effectively over. It’s time for some shrewd leadership decisions if the party that brought about so much change to South Africa regains its trust. And while hope is in the air, it will require some nudging from inside the current ANC structures, as those standing outside have already started voicing their opinions. And these actions are putting the party above the nation. – Stuart Lowman

JOHANNESBURG, April 10 (Reuters) – South Africa’s ruling African National Congress has lost some supporters’ confidence and could totally lose them if it does not deal with discontent with President Jacob Zuma, an ANC official said on Sunday.

The ANC has been in damage control mode since the country’s highest court ruled that Zuma failed to uphold the constitution by ignoring an order to repay some of the $16 million in state funds spent renovating his home.

The party, which came to power after toppling white apartheid rule in 1994, crushed an opposition bid to impeach Zuma last week but has faced rising calls, including from some of its veteran members, to remove him.

Speaking at the anniversary of the 1993 killing of anti-apartheid activist Chris Hani, Mantashe defended the ANC’s rejection of the impeachment drive against Zuma, saying to do otherwise would have served the opposition’s agenda.

“But it doesn’t absolve us from looking into our own behaviour. There must be change in our behaviour as a movement,” he added. “If we don’t change our behaviour, we become arrogant in dealing with our problems. We are going to pay the price.”

Mantashe spoke as residents in poor townships vowed to boycott August local government elections out of anger that the ANC has done little to improve their lives, dashing the hopes that accompanied Nelson Mandela’s inauguration as South Africa’s first black president two decades ago.

Zuma’s own presidency has been riddled with controversy. Most recently, his close ties with the wealthy Gupta family have come under scrutiny after the deputy finance minister said the Indian-born family had influenced the sudden firing of his former boss in December.

On Friday, Zuma’s son Duduzane said he would sell his investments in a mining firm owned by the Guptas amid speculation the family is wielding undue political influence.

"We must humble & explain ourselves to the people all the time. We must be able to accept rebuke by the people" #Mantashe #ChrisHani

The City Press newspaper reported on Sunday that some Gupta family members had left South Africa for Dubai following their resignation from positions at some local companies after major banks dropped the firms as clients.

Representatives of the family’s business interests declined to comment on the story.

“The Gupta family has no further comment at this time, and will not be detailing the individual movements of family members,” a short statement said in response to Reuters questions.

“The onus is now on the business establishment and the banks to do the right thing.”