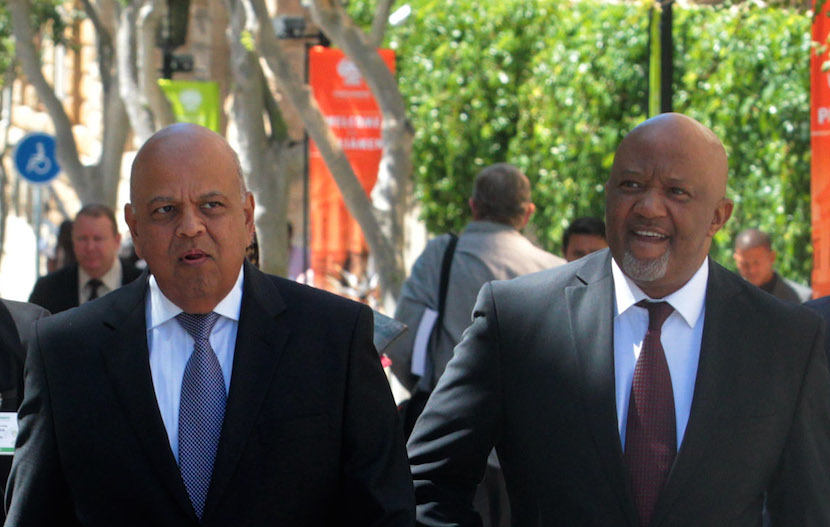 It’s hard to believe how much has happened in little over a month since Deputy Finance Minister Mcebisi Jonas went public on the Guptas offering him the keys to National Treasury. Obviously, his promised promotion to Finance Minister came with conditions attached – believed to include the ejection of the Treasury’s Top Four officials in whose hands lie the fate of the biggest of the Gupta bets. The family invested heavily in high cost underground uranium mine on the strength of SA going ahead with its proposed $100bn nuclear build programme. Jonas turned down the Guptas and after a similar conditional offer was disclosed by Vytjie Mentor, told the rest of South Africa about it. That sparked a fierce debate on what is now termed “state capture”, putting so much heat on the Guptas they did a midnight flit to Dubai a fortnight ago. For the first time since his statement on the Gupta offer, Jonas has gone public with views on state capture, patronage and more in this thoughtful analysis first published in Umsebenzi Online, an SACP publication. – Alec Hogg

This is because the South African state is able to exercise full administrative control over its territory; it is able to successfully maintain a monopoly over violence; and finally it is able to consistently provide public goods to its citizens.

But this in turn should not suggest that issues of state capture are unimportant. The emergence of debates, discussions and engagements pertaining to state capture and associated patronage networks in recent weeks require us to question and critically examine the potential impact such networks could have on the South African state, economy and society. We also need to consider the repercussions of not dealing with these issues in a coherent and very direct manner.

Importantly, the Editorial Notes debunk the conspiratorial angles that have been peddled largely through ANN7 and The New Age – that the recent backlash against state capture has been sponsored by so-called white monopoly capital (Ruperts, Oppenheimers etc). And even worse, that Treasury functions – and comrades such as Pravin Gordhan and myself – have been inserted in our positions to safeguard the interests of white monopoly capital.

In a similar but different take on the matter, others like Numsa’s Irvin Jim regard the “state capture by the Guptas” as a lesser danger than that of white monopoly capital, which he crudely argues has long captured the state.

In dealing with Jim, the Editorial Notes critically show the relationship between the Guptas (and what is referred to as their “smash and grab parasitic agenda”) and so-called white monopoly capital (who are deeply entrenched in reproducing our current system of accumulation). The Editorial Notes correctly argue that the “smash and grab” phenomenon ultimately weakens those state institutions charged with managing and transforming the economy, and thereby undermine its capacity to discharge this core strategic task.

I would argue that two areas of focus that were touched on in the AC Editorial Notes require to be further developed to deepen our analysis of state capture and its implications for the NDR.

Firstly, state capture undermines the efficiency of the state, especially in instances where there is a direct relationship between state capture and corruption.

This is particularly significant in the context of our current fiscal challenges. This happens primarily through the state paying more than it needs to for outsourced goods and services (what I would call a patronage premium); through goods and services being outsourced that could and should be done in-house by state employees; and through extensive time delays and additional costs (including litigation costs) arising from non-compliant procurement decisions being challenged.

Our efforts to centralise procurement as the Treasury is an attempt to cut back on these inefficiencies.

Secondly, state capture undermines the effectiveness and impact of the state.

This happens through poor quality services and public goods being delivered by patronage networks by less than capable service providers; through sub-optimal economic impacts being derived from beneficiaries of state resource extraction licences; through fiscal  resources being redirected away from public goods provision for the poor or from value-adding economic endowments towards servicing some or other patronage network; and by weakening state capacity through appointing pliable but less than capable people in key positions (especially in finance and procurement, but also as accounting officers and even political office bearers).

Thirdly, state capture undermines the legitimacy of the state, and by implication our movement itself.

This happens through governance and rules being flouted with at best partial accountability and consequence management. In the context of a very capable and transparent auditing function (the auditor general of South Africa), a robust public protector, and a vibrant (what some may call a hostile) media, our inappropriate transactions do not escape the public eye, nor the eye of other influential players such as the rating agencies.

This is more of a two-way sword. The fact that our dirty laundry is on public display reflects as positively on the robustness of our democratic and watchdog institutions as it reflects negatively on our own integrity. But there is no escaping the fact that it seriously undermines our ability to lead society through the current phase of the NDR.

In its worst iteration, political office can become associated with possibilities for personal wealth accumulation, what is often referred to as the “commercialisation of politics”. This could have the effect of changing the focus and practice of politics away from driving fundamental socio-economic transformation (as envisaged in the Freedom Charter) towards managing national and transnational business networks that service the wealth acquisition of politically-connected elite. This is a grave danger that we must not allow to infect our movement.

A more sensitive issue that we need to better regulate as the movement is the role of business in party funding. We must recognise that we do not have access to historic accumulated wealth (endowments and the like) and that established capital is not ideologically orientated to funding us.

This means we rely significantly on new wealth, some of which is acquired through state levers. This should not allow slippage in state accountability and control systems (procurement etc), and we need to intensify our vigilance in cases where party funding is associated with abusive personal enrichment and the undermining of state efficiencies.

The second big issue relating to state capture that we need deeper discussion around is how to better manage and regulate relations between the state and capital.

Here we need to locate our position conceptually. Instrumentalist interpretations associated with more orthodox Marxism see the state as always acting in the interests of the capitalist class. Gramsci, through his concept of hegemony, provides a far more helpful framework to understand the state in capitalist society. In his conception, the state is more of a site of contestation, mediating and eliciting trade-offs among the contending classes (albeit in the last instance to protect the interests of the ruling class).

Poulantzas further develops this approach, introducing the dimension that the capitalist class itself is not homogenous in its interests, but is comprised of various factions of capital which compete for state power and influence. The French Regulation School (Aglietta, Lipietz, etc.) built on this in explaining how systems of capital accumulation (the regimes of accumulation) are regularised and stabilised through institutional laws, norms, policies and practices (the mode of regulation). These are not always in sync and result in ongoing crises and transitions.

While time does not allow in this brief reflection to comprehensively apply this framework to South Africa, the point must be made that any discussions about state transformation and function must be linked to broader discussions about the system of accumulation we are simultaneously regulating and transforming (and the contradictions entailed therein).

We should also dig out of our memory banks those old discussions about base-superstructure, and in doing so avoid the pitfalls of both economic determinism and voluntarism. As the democratic developmental state, we should be realistic about the ways in which our inherited system of accumulation (built around the minerals-energy-finance complex) structures the policy choices we have at our disposal.

At the same time, we should appreciate that the state, underpinned by an alliance of progressive forces, including patriotic capital, can make significant changes within the mode of regulation that will trigger changes in the system of accumulation.

In practical terms, this suggests that we should be engaging more – not less – intensely with capital (and particular industrial segments) to ensure we rapidly address our core structural weakness, of exporting primary commodities, and importing value-added manufactured products.

South Africa remains overly dependent on external sources of growth, rather than its own internal engines of growth. This in turn makes the economy extremely vulnerable to factors beyond its control, such as the global commodities demand, the monetary policy of major economies such as the United States, and the risk appetite of bond and equity investors.

But this will not happen unless we rethink and implement new models of economic governance, in which the state and capital (or fractions and segments thereof) move beyond traditional paradigms towards a system of reciprocal incentives and trade-offs in the national interest aimed at growing jobs, investment and revenue, and addressing barriers to entry and bottlenecks to new ventures.

At the centre of this new economic governance model must be a clear and decisive system for distributing rewards and costs. This will necessitate trade-offs being facilitated between the state and capital, between foreign and domestic capital, between corporate capital and SMMEs, between established industry players and new entrants; between capital, labour, and consumers; and between the formally employed and unemployed.

Such a model will also mitigate against the more commonly associated economic policy failures – including capture and rent-seeking by corrupt interests, crowding-out investment, and misallocation of resources (picking losers).

In line with current thinking on the developmental state, a shift to this approach will require new and heightened levels of political maturity, as well as more centralised and streamlined economic policy coordination and authority.

It will also require new state capabilities to be developed and sustained over time (in critical areas such as industrial policy design and implementation, trade and market intelligence, public investment structuring, and transaction and project management, among others). The state also needs to be further embedded in an alliance of popular and progressive forces to regain legitimacy and avoid narrow capture.

Risks of not more deliberately transforming our inherited system of accumulation could potentially compromise national sovereignty.

Dealing with the current issue of state capture is a critical first step in this journey. To do this we also need some thoroughgoing political, ideological and organisational introspection.