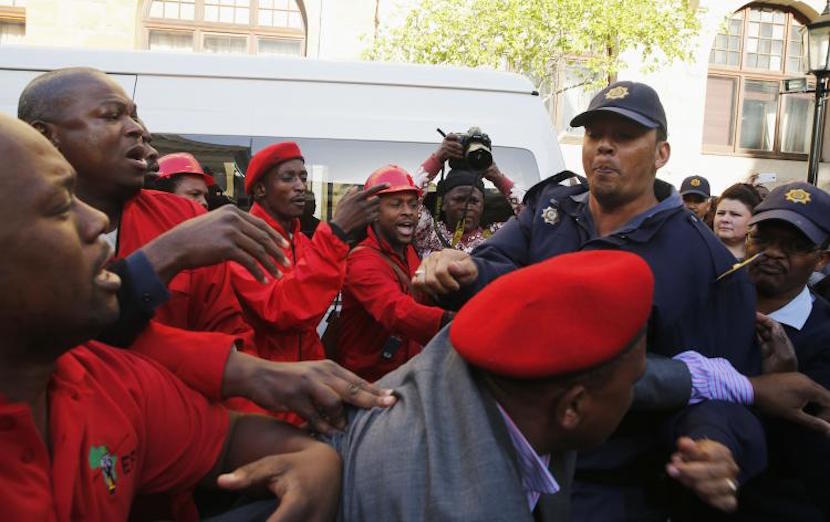 One could argue against the idea that EFF leader Julius Malema’s gone silent. Especially following the Al Jazeera interview where he threatened to take power through the barrel of a gun. But when Cape Messenger editor Donwald Pressly refers to his silence, he’s referring to Absa. As it’s well documented that Malema’s threatened to occupy bank branches in the past. The silence may be due to the bank seeking a suitor after parent company Barclays decided to offload its stake. But Pressly goes deeper and finds another conspiracy, and he wonders if there’s a bigger story here. One where big business, the DA and EFF coalition are planning to oust President Zuma. But as Donwald concludes, it’s surely just a mischievous statement? – Stuart Lowman

Have you noticed that the Economic Freedom Fighters have gone quiet on their threats to occupy Absa banks across the country? Reading politics – and business – in South Africa is much like keeping a watch on the old Soviet Russia. One had to see smoke signals from the Kremlin, decipher code, look to see who has been removed from the official portraits or who has been included. One also needs to understand sudden silences about previous threats.

So it is with Julius Malema, the EFF leader. The threat to one of our main banks is now forgotten. Perhaps it is because his latest threat made on Al Jazeera – to use violence to remove the ANC government if need be  – has caused such an outraged response from the ANC. It is threatening to have him charged with treason. If this does get to court, I imagine that the wording if need be will translate into expensive work for many top lawyers to argue about in the coming months.

Cape Messenger has carried a Black Opinion piece on “Did FNB fund the EFF trip to London?”. Writings on this website – carried by the Gupta family’s The New Age and ANN7 –  may appear to readers to be dotty and conspiratorial but sometimes one has to read between the lines. Something has, indeed, stopped Julius Malema, the EFF leader, from continuing his campaign against Absa. The article written by a Black Opinion Staff Writer reports first that “shocking evidence has emerged that Julius Malema of the Economic Freedom Fighters may be working with bankers and powerful white business to destabilise South Africa”. There the author makes a leap of faith and argues that white business – in particular Johann Rupert, Paul Harris (of RMB/FNB), Laurie Dippenaar and GT Ferreira – are colluding with Malema to forge a new movement – a marriage of some kind between business, the DA and the EFF. By extension and following the line of argument Black Opinion suggests they are colluding in a coup plot.

The détente between Malema and Rupert in particular – who both, indeed, want President Jacob Zuma to resign – “could have been hatched in London most likely by men like Lord Robin Renwick”, said Black Opinion. They outrageously described him as a “known coup plotter and regime change veteran who may or may not have been linked to the FNB shareholders”. Black Opinion notes that Malema “under the secretive imperial rule of Chatham House” was seen in deep conversation with Renwick, who happens to be a former British High Commissioner to South Africa. Renwick hosted Malema at Chatham House.

It is true that Malema started making statements against Robert Mugabe and land grabs on his trip to the United Kingdom last year, but his party has notably contradicted these stances later.

The Black Opinion conspiracy has elements of truth in it though. His invasion plan of Absa has petered out, mysteriously. Talks between the DA and EFF inevitably happen – especially ahead of a municipal election where coalition  governments will be necessary – but Black Opinion is, surely, turning a molehill into a political mountain by suggesting that the parties are on the verge of political unity. Big business, the DA and Malema may well agree on the need to oust President Zuma, but that doesn’t, surely, put them all together in one violent coup plot?

There is no doubt, however, that something has altered the course of Malema – and toned down some of his anti-business rhetoric – but it is surely mischievous to suggest that “white capital”, the DA and the EFF are all conspiring a revolution and the EFF leader has suddenly become their ally?