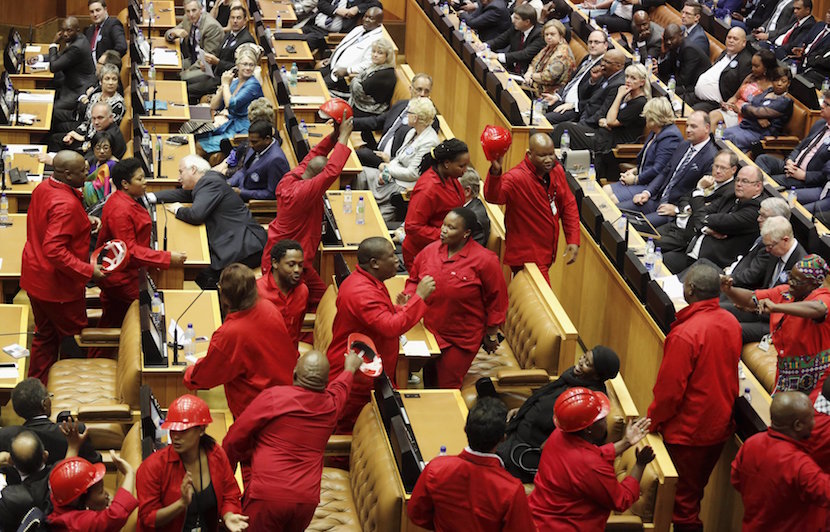 It’s early days for the Julius Malema’s Economic Freedom Fighters, but there is little doubt it is the party which now enjoys momentum in South African politics. This is no accident. Everything the EFF does, in public at least, appears to have been carefully considered. The unveiling of its election manifesto over the weekend came after weeks of pre-launch events – ensuring a build-up that resulted in a sea of red engulfing the Orlando Stadium in Soweto. And in Malema, the party possesses a leader who knows what buttons to press, tapping into the ANC’s obvious weak points at every opportunity. With the EFF having gatecrashed the party, South African politics is suddenly competitive. A much needed factor for any democracy to function properly. – Alec Hogg

Johannesburg – The EFF has patted itself on the back for launching a successful 2016 local government elections.

On Sunday, spokesperson Mbuyiseni Ndlozi praised the party and thanked its members and supporters following the launch which took place at the Orlando Stadium in Soweto on Saturday.

This will be the party’s first time contesting in local government elections since its establishment in 2013. The EFF is the third largest party in the country. On Saturday, party leader Julius Malema addressed more than 40 000 party supporters in Soweto.

The party praised Malema for giving a successful address despite the fact that he was mourning the loss of his aunt Nurse Malema earlier in the week. Malema had not only addressed the crowd in Soweto for nearly two hours, but had also addressed guests at a gala dinner hosted by the party later that night.”We express gratitude to him because our CIC is not an elite leader who only comes to events as though he is a guest.”He attends to the mobilisation and logistical detail that goes into our events,” Ndlozi said.

Saturday’s gathering was the culmination of weeks of face to face campaigning in townships across the province by Malema and members of the executive committee.

EFF manifesto is radical, whimsical, sweet in parts and a bit scary in others. Stronger than its inaugural manifesto of 2012.

According to party chairperson Dali Mpofu, some members had slept outside the stadium on Friday night ahead of the event. By Saturday morning thousands of people dressed in red waited to get into the stadium to hear Malema speak.

Malema’s address included threats against President Jacob Zuma, suggestions for improved municipal services – including houses better suited for “touching” between parents – a diatribe against bicycle lanes, the promotion of reading, rhetoric on land redistribution, and a recitation of the EFF’s parliamentary achievements.

Malema concluded this section of his speech by holding up a pamphlet containing the EFF’s local government manifesto.

Using the example of housing, Malema said that the EFF would ensure that the kinds of homes provided for the poor would be suitable to give families back their dignity.

Malema asserted, at several points, his party’s policy of land appropriation without compensation – but sought to assure white people that this policy was not intended to kick them out of the country. Malema also declared that those wanting to be municipal councillors under the EFF had better pick up a book.

He condemned councillors who did not help their communities. Malema said municipalities needed to get their priorities right. – News24