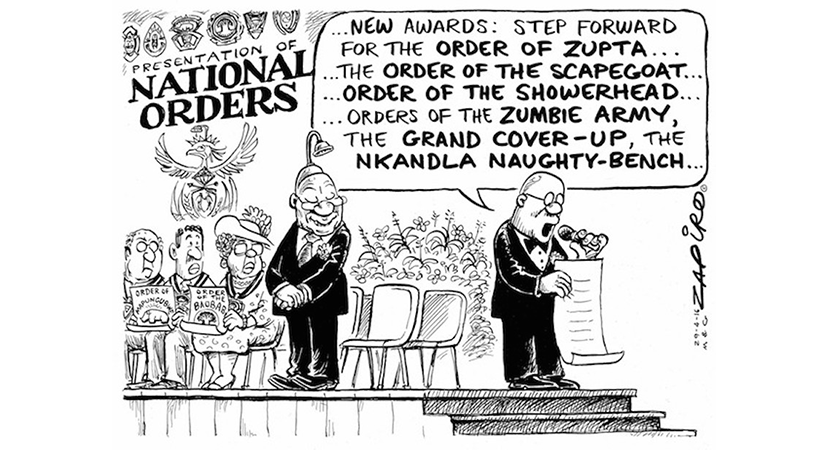 The elephant which dominates South African boardroom discussion – the Gupta State Capture agenda – seems to stay in that rarified atmosphere. When the worthies leave mahogany row their passion dissipates into silent alignment with the Gupta family’s close friend, President Jacob Zuma. Last night Zuma hosted business leaders in the same way any other head of state would do. To any outsider, it was as though those dynamite disclosures by Mcebisi Jonas and Vytjie Mentor, and the scathing judgement by the Constitutional Court never happened. You have to wonder what is worse – Zuma ignoring allegations that the Guptas appointed his key cabinet members and plundering of the private purse to expand his homestead; or private sector leadership’s endorsement through a conspiracy of silence. By their actions last night, executives send the rest of us the message that Zuma is right to ignore the national heroes who risked much in exposing the Gupta modus operandi and the President’s deceit. At last night’s meeting with Zuma, representatives of big business smiled in collaboration, tinkering on the fringes while acting as if real issues bedevilling the South African economy – crony capitalism, cadre deployment and corruption – are someone else’s bad dream. A little backbone usually goes further than compliance. On this evidence, little wonder young radicals dismiss spineless “white capital” as part of the problem? – Alec Hogg

Pretoria – The collaboration between government, labour and the business sector to rescue the country from possible downgrade and to stabilize the economy is starting to bear fruit, President Jacob Zuma said on Monday night.

“In February… I convened a meeting of chief executive officers of major companies and captains of industry to discuss ways in which we can work together to reignite economic growth and create jobs,” Zuma said during a press briefing.

“I mandated the Minister of Finance to lead a process of engaging with the private sector in particular to map out a strategy to the goal of growing the economy.

“Leaders from labour and business joined the Minister of Finance on a roadshow abroad early this year to promote the country and prevent a possible credit ratings downgrade. The hard work is paying off, and we saw the evidence this weekend with the announcement by Moody’s.”

Zuma said Moody’s had acknowledged that the country was at a turning point following years of weak economic growth. He attributed that to the collaborative efforts of all the stakeholders involved.

He said despite the fact the economy was showing signs of recovery, the level of economic growth have been much weaker than previously anticipated.

“Part of this is due to the challenging global economic environment. At the same time, we recognize as government that there are also some domestic constraints that we must attend to,” said Zuma.

He identified the National Development Plan (NDP) as a key driver of structural reforms that should be implemented to create an enabling environment for job creation and inclusive growth to address the triple challenges of poverty, inequality and unemployment.

He said government had translated the NDP into an implementable programme, the medium-term strategic framework, which sets out government goals and priorities from the NDP over five years.

“We have responded to the crisis by introducing the nine-point plan to boost growth and employment, within the framework of the NDP.”

“In the last year, substantial progress has been made in these areas… However, faster and more successful outcomes will be achieved when we work together pursuing common goals as government, business, labour and civil society.

“That is why we are pleased that we are working together more than ever before, as the various sectors. This is truly a very positive development for our country.” – News24