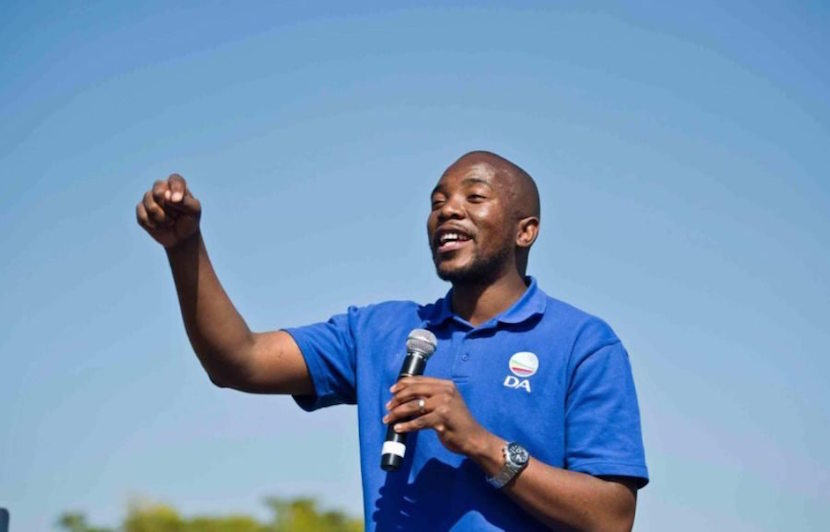 Electioneering has reached fever pitch in Nelson Mandela Bay (PE) where the leaders of the leading protagonists traded blows over the weekend. ANC President Jacob Zuma’s racially-based insults plumbed new depths when he referred to DA mayoral candidate Athol Trollip as a snake; an angry DA leader responded by calling the king of Nkandla a modern day Hendrik Verwoerd because he thinks South African blacks are stupid. In a country where snakes are despised and the scars of Apartheid still raw, it’s hard to determine which insult is worse. But talk is cheap. Money, or in this case votes, buys the whisky. A confident DA is already planning a victory parade, with Maimane telling his supporters he will return after the election to slaughter cows in celebration. That’s no idle promise. The polls put his party well ahead, on the cusp of an outright majority. – Alec Hogg

Port Elizabeth – An angry Democratic Alliance leader, Mmusi Maimane, has lashed out at President Jacob Zuma for some of his campaign messages.

Speaking a mere three kilometres away from where the ANC held its Siyanqoba Rally on Saturday, Maimane addressed thousands of DA supporters in Nelson Mandela Bay, Port Elizabeth, during the party’s ‘We can win’ rally on Sunday.

On Saturday, Zuma called the DA an offspring of the apartheid era National Party, and said the party was too focused on the ANC and corruption, Nkandla and the president.

He [Zuma] likened Maimane to an “artificial” leader who was not listened to by white members of the party and also said the DA did not have any heroes, which was why they had used former Nelson Mandela in their campaigns.

In love with apartheid

He said Zuma was the only person who “missed apartheid”.

“He seems to be so in love with apartheid. Jacob Zuma still believes in separate development. In his world, black people must be on this side, and white people on another.”

Maimane said the president relied on apartheid to advance the ANC, a party built on non-racialism.

“I am angry today, on Sunday. The things he said, lies. We will show Zuma he is the one who is not clever when we vote for change,” he said.

#DARally Maimane says South Africans will show Zuma in 11 days they don't vote based on their race, but because they are tired of his lies.

Zuma’s mind was the one that was oppressed, Maimane said.

Maimane dedicated some of this speech to slamming the ANC for “corrupting” and Zuma for the money spent on his Nkandla homestead.

Zuma on Saturday said the DA was the same as the National Party.

“When a snake, a poisonous one, gives birth, it gives birth to another snake. How can you vote for people who don’t know you and who you don’t know?” Zuma asked.

He likened the  DA’s mayoral candidate for the area, Athol Trollip, to a snake.

Maimane reiterated on Sunday that the ANC had given birth to corruption and corrupt mayors, making an example of Nelson Mandela Bay mayor Danny Jordaan and the Fifa allegations of bribery.

Trollip said they knew who the real snakes were, and it was not them [the DA]. – News24