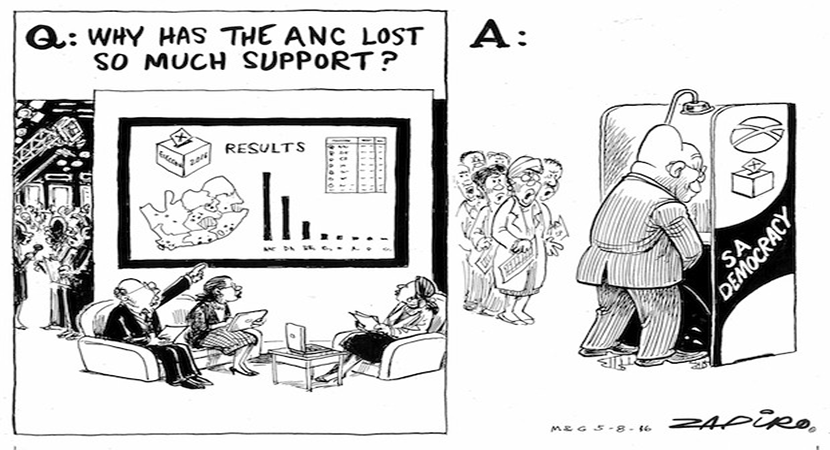 ELECTIONS FINAL: The ANC fell 15 seats short of a majority in Johannesburg, completing a miserable 2016 municipal election for South Africa’s ruling political party. Of the Big Six metros where since 1994 the ANC has ruled five with comfortable majorities, it was only able to retain over 50% in eThekwini. With Nelson Mandela Bay falling to presumably an already concluded DA alliance, Joburg means the ANC has now fallen short in all three big Gauteng councils (see table) and could face ejection if the official opposition can put together a promised coalition. The DA is now the leading political party in three of the Big Six metros. In these councils  106 ANC representatives are suddenly out of a job. The DA will be adding 86 newcomers to its benches while the EFF enjoyed a great first election with 101 new councillors in the Big Six and into double figures for the three big Gauteng councils. The ANC fell an agonising four short of the 113 seats it required to continue ruling Ekurhuleni, a council where the four seats won by Mandla Galo’s little known African Independent Congress have suddenly taken on great importance. It is not inconceivable that the DA and the EFF could shape coalitions to eject the ANC in Ekurhuleni as well as in Tshwane and Johannesburg. The DA has already celebrated taking over the Nelson Mandela Bay council where it has tied up alliances with other parties to add the four seats needed to achieve a majority. The two big metro councils finalised earliest went as expected, the DA retaining Cape Town and the ANC holding eThekwini. But there were contrasting fortunes for the parties in these metros – the DA will be adding 19 new members to its benches in Cape Town where the ANC will be retiring 16 of its representatives. In eThekwini the ANC retained all 126 seats, but the DA will be adding 18 new councillors. The massive setback for the ANC will create a new legion of anti-Zuma protagonists with 16% of the ANC’s councillors in the Big Six metros losing their well paid council jobs and the patronage which often accompanies them. How that will impact the balance of power within Luthuli House is anyone’s guess – but with these results reflecting a new reality, there are dozens of ANC Parliamentarians who will also suddenly be fretting about their futures ahead of the 2019 general election. The 2016 municipal poll has been a huge victory for the two major opposition parties. But to press home the advantage, the DA and EFF will need to fashion their unlikely coalition. – Alec Hogg

South Africa's most important election since the dawn of democracy in 1994 is being closely watched around the world. Here is our updated summary of votes cast in the six major metropoles - and for the country as a while.

PRETORIA, Aug 4 (Reuters) – Urban South Africans dealt the ANC its biggest political blow since the end of apartheid on Thursday, knocking the ruling party off its perch in three cities as voters vented anger at corruption, high unemployment and poor public services.

The African National Congress (ANC) – which ended white-minority rule when it won power in the first democratic national election in 1994 – still held a big lead in the overall count in nationwide municipal elections.

But it was trailing the opposition Democratic Alliance (DA) in Port Elizabeth, which it has previously held virtually unopposed for the last two decades. The ANC was also unlikely to make it to a 50 percent outright majority in the capital Pretoria and economic-hub Johannesburg.

A significant loss of support for the ruling party in these areas could mark a watershed in South African society and politics as the country shifts from what has effectively been a one-party system in the era immediately post-apartheid.

It could reshape the political landscape ahead of the 2019 national election, and may also embolden President Jacob Zuma’s rivals within the ANC to challenge him.

The municipal vote comes as Africa‘s most industrialised country teeters on the edge of a recession after a string of corruption scandals surrounding Zuma.

The ANC failed to win Zuma’s hometown of Nkandla in Kwa-Zulu Natal province, a personal blow to Zuma, where the Inkatha Freedom Party retained its hold on the region.

Many ANC supporters are switching allegiances to the DA, bolstering its attempts to attract black voters and shake off its image of a party that chiefly serves the interests of the minority white community.

The DA, which last year elected its first black leader, Mmusi Maimane, was ahead in Johannesburg and in Nelson Mandela Bay, the area named after the anti-apartheid hero who led the ANC to power. It includes the city of Port Elizabeth.

The DA had an unassailable lead, almost 69 percent of the vote, in Cape Town, the only big city currently not run by the ANC.

Is it too early to speculate about how ANC may react to JZ as a result of polls? Little doubt he has cost them. Will he serve his full term?

The ANC was dominating most of the countryside, long a key area of its support, underscoring a widening political divide between urban and rural South Africa.

“The ANC vote has held up well in rural areas but fallen away sharpest in urban areas, as expected. The ANC is therefore becoming a party of the rural vote,” Nomura analyst Peter Attard Montalto.

The ANC had 42.9 percent of the votes in Tshwane municipality against the DA’s 42.7 percent after half the votes were tallied.

In Johannesburg, the opposition party’s lead had been trimmed to 42.09 percent to 42.02 percent for the ANC, with 47 percent of the votes counted. In Nelson Mandela Bay it led with 49.5 percent versus 39.2 percent, with 94 percent of votes in.

ANC officials in Nelson Mandela Bay cried foul and said it was lodging a complaint about 500 dumped ballot papers found there with votes marked for the party.

Opponents say defeat in a region named after the ANC’s liberation hero would be an embarrassment for the ruling party.

13.9 million voters is nothing to be despondent about…but ANC must reflect on a better product offering and the problem is not the mayors

The Economic Freedom Fighters (EFF), which is led by Julius Malema, Zuma’s one-time protege and a former ANC youth leader, is participating in only its second election and was running a distant third in the votes counted.

The rand currency and government bonds firmed on Thursday, boosted by the smooth running of the elections.

Many South Africans who queued up to vote across the country said they were worried about Zuma’s performance and the state of the economy.

Zuma survived an impeachment vote in April after the Constitutional Court said he breached the law by ignoring an order to repay some of the $16 million in state funds spent on renovating his private home in Nkandla.

In December, he rattled investors after changing his finance minister twice in a week, sending the rand plummeting. Zuma has said he would repay some of the funds spent on his home.

Pretoria – Political horse trading has started on the floor of the national IEC results centre, as provisional vote tallies gradually trickle in and reality dawns after months of election campaigning.

By 16:00 on Thursday, 75% of the votes had been counted and audited, with results from the metros the slowest to come in.

The buzz on the floor grew toward the afternoon, with most activity around the Democratic Alliance’s table – the party that looks set to score the most from these elections after an almost year-long campaign.

A large team of party election hacks – most of them old hands, like DA chairperson Mike Moriarty and federal council chairperson James Selfe – in branded blue T-shirts stood around the table watching and analysing results, while a smiling spokesperson, Phumzile van Damme, spoke to journalists.

Although DA leader Mmusi Maimane declared that it was too early to talk about coalitions, a source in the Economic Freedom Fighters said they have asked the DA for a meeting next week to discuss possible co-operation.

All Maimane would say was: “We will never go into a coalition that will undermine our ability to deliver to the people of South Africa.

“One of our key brands as party is that we govern better than anyone else.”

The EFF would, apparently, agree to team up with the DA to have them governing in Tshwane and Nelson Mandela Bay, while the red brigade would want to govern in Johannesburg or Ekurhuleni in return.

This might not find favour with the DA because, even though News24’s projections show that the African National Congress and DA could both get 42% in the metro and the EFF 10% – which would make the EFF the kingmaker – the party’s showing in the Nelson Mandela Bay Metro isn’t significant enough to give it bargaining power there.

Despite ANC sources claiming that the party would win up to 37 out of that metro’s 60 wards, News24’s projections for Nelson Mandela Bay show that the DA could get just above 47%, with the ANC set to get in the low 40s. The United Democratic Movement is most likely to be in a kingmaker position here.

Meanwhile, talk on the floor was that the Freedom Front Plus, which ran its campaign on the ticket of get rid of an ANC government, had indicated that it would talk to the ANC – and not the DA – about coalitions in Tshwane, where it was the third biggest party in the council before the elections, with 1.7% of the 2011 vote.

At the ANC table, party treasurer-general Zweli Mkhize remained poker faced as he focussed on the results board.

The governing party’s results usually only pick up when vote tallies in the larger voting districts come in – which is expected overnight or in the early hours of tomorrow morning – and Mkhize knows that.

Still, it is an agonising wait.

An ANC-aligned government official, however, said in a private conversation that the party was expecting an underwhelming result.

Already in the 2014 general elections, its support in the Gauteng metros showed a drop. “We have been asking ourselves the difficult questions for two years already,” he said.

ANC deputy secretary general Jessie Duarte, however, looked on edge and did not even muster a smile to greet journalists. A party official at a nearby table even claimed that Duarte had given them – and a spokesperson from another party – the middle finger.

EFF secretary general Godrich Gardee had not slept all night and by 12:00 the stress was showing. Even though his party had mustered almost 8% of the national vote, it had barely shown any growth since the 2014 elections.

Asked to comment about his party having won two wards – one in Rustenburg around Marikana and the other one in KwaZulu-Natal’s Nongoma Municipality, according to a tweet by @sentletse – Gardee indicated that he would rather finish his phone conversation. For the EFF it was control of a council that mattered, not wards, he said.

Spinning classes must be full and rather interesting today…..💪
#ElectionResults

EFF deputy leader Floyd Shivambu and chairperson Dali Mpofu walked into the results centre after lunch time, but initially refused to speak to the journalists that accosted them, because of other urgent business.

The Inkatha Freedom Party table was all smiles, however, as its support edged past 5% nationally, with a significant portion of the KwaZulu-Natal vote still to come in. “We have made up what we lost in 2014,” IFP MP Liesl van der Merwe said.

This was an indication that it had gained back the vote from supporters of the breakaway National Freedom Party, which botched up its elections registration and then urged its supporters to vote for the ANC. This apparently never happened. – News24