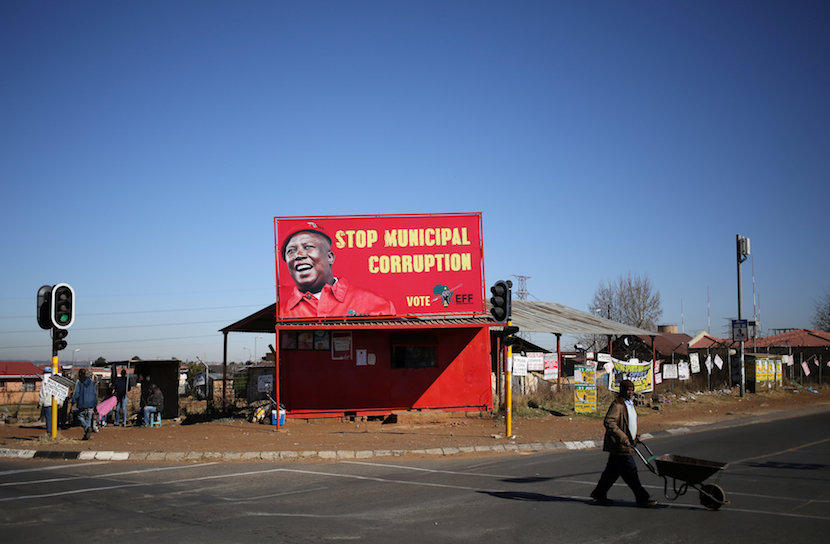 In late 1993 I met with Anton Rupert, one of South Africa’s greatest ever entrepreneurs and philanthropists. Then 77, he possessed the wisdom of an old man who had lived a full life, so over lunch was asked what he thought was in store for his country after the historic elections a few months later. “Never forget,” he advised, “when a foot soldier becomes an officer he no longer thinks like a foot soldier.” His words are worth remembering as an expectant electorate contemplates the dawning of SA’s new era of competitive politics. With no single political party having prevailed 27 metros and municipalities, the political parties have two weeks to form ruling coalitions. It is an obvious opportunity for an early switch from a near one-party state to a true democracy where those voted into power become responsible to the electorate which put them there. In the three biggest hung metros – Johannesburg, Tshwane and Ekurhuleni – Julius Malema’s EFF has the power. It can side with an ANC desperate to continue ruling, or opt for the clean sweep which is sure to follow the installation of DA-led coalitions. The next two weeks will see all manner of conspiracy theories and pundit’s projections discussed around the country. The EFF is sure to demand tough conditions for its support – the ANC would surely be told Zuma and his crony capitalist pals the Guptas must depart. For the DA it would require disproportionately powerful positions for EFF members. But when the deals are finally struck, one thing is certain – the EFF’s leadership will be forced to shed the reckless rhetoric of a responsibility-free foot soldier and begin acting like officers. That’s what happens in a democracy. Witness the prescience of the late Dr Rupert. – Alec Hogg

Pretoria – Negotiating coalitions with the EFF looks set to be a drawn-out game of cat and mouse.

While the kingmakers following this week’s local government elections could draw out the negotiations for the full two weeks available, the two bigger parties, the ANC and the DA, hope announcements could be made in the coming week.

Coalition deals were very much the only thing on the lips of politicians on the floor of the IEC’s elections results centre in Pretoria from late Thursday onwards as projections from early results showed the ANC would be below 50% in a few councils.

But a nonchalant EFF spokesperson, Mbuyiseni Ndlozi, told News24 on Saturday these were mere “warm-ups for the party”.

He said, “We have had all types of conversations from the ones who saw the light [that there would be hung councils] much earlier. There have been warm-ups earlier but there hasn’t been an approach. Where there is, we will explain and inform the public.”

Ndlozi said the ‘warm-ups’ were with the DA, with DA chair of the federal council, James Selfe, confirming his party had approached the EFF to talk about Tshwane, which the DA won with 43% of the vote against the ANC’s 41.5%.

“They are warming up to us because we don’t need anything. We don’t have to talk to anyone,” Ndlozi said.

His playing cool does not, however, entirely reflect reality. The EFF, like any political party, does want power – and to be in a position that would allow it to ultimately get more votes in subsequent elections.

Even though Ndlozi said negotiations weren’t yet in the phase where actual bargaining was taking place, in ANC circles a story is doing the rounds that EFF leader Julius Malema had already asked for the speaker position in Tshwane metro council, as well as the mayoral committee member position for roads and transport. This could possibly be to make good on his promises to build roads for Hammanskraal residents.

The party’s 11.7% means its numbers could help either the ANC or the DA set up a government there.

In a Twitter poll it ran on Friday, which got more than 17 000 responses, those who participated were by far keener for a coalition with the DA than with the ANC or any other party.

If EFF goes on a coalition, which party should we vote with?

This is, however, an issue that could cause friction within the EFF itself too as negotiations progress.

Ndlozi was adamant the EFF would never consider coalitions with the ANC. “The ANC is dying, the ANC must accept that and die. Dying, even in the absence of the EFF. Even if we say ‘now we are closing shop’, the ANC is going to unravel next year,” he said. Ndlozi was referring to the party’s leadership election conference in 2017.

Other leaders in the party have, however, told Daily Maverick that they might talk to the ANC, and there is even a suggestion that struggle stalwart Winnie Madikizela-Mandela, long an icon of the EFF, could be roped in to talk to Malema.

Ndlozi himself was seen in a serious chat with the youthful ANC spokesperson, Zizi Kodwa, on Saturday as the last results were trickling in – so it could be that he was merely posturing when he said the EFF wouldn’t talk to the ANC.

The EFF would also have to be careful to explain co-operation with any other parties to its electorate.

By way of persuasion, however, the DA would have reminded the EFF of what happened to former Independent Democrat leader Patricia de Lille’s party in 2006 when it chose to vote with the ANC on certain matters in the City of Cape Town’s newly formed coalition government.

“Three weeks later there was a by-election in an ID ward and the DA trumped the ID,” Selfe said. “Patricia later admitted she made a mistake.”

He said he genuinely believed pronouncements by the EFF that they would not work with the ANC.

The explanation for the drop of support from voters for the ID was that its voters were tired of the ANC, and this could very well hold true for the EFF, too, whose voting base and leadership contain a number of former ANC supporters.

Ndlozi said its national leadership would handle the EFF’s negotiations centrally, but for the DA the process could be slightly more decentralised.

Selfe said two types of negotiations typically take place, “… those that can be done on local level, and those parties that want national framework agreements.

In the Nelson Mandela Bay metro, local and national considerations would play a role. Even though the DA could get the four seats it needed to take control of the council from smaller parties like the UDM and the United Front, “if one is involved in a more longer-term opposition realignment exercise, it might be wise to be as inclusive as possible”, Selfe said.

Simply put, Nelson Mandela Bay mayoral candidate, Athol Trollip, was out of order to declare that the party would never team up with the EFF there.

Selfe said informal talks with parties took place on the floor of the election results centre as they sat waiting for the results to find out who in principle would be in favour of coalitions.

“Most are in favour of coalitions, although many said this would be subject to ratification by their political structures.

“So over the weekend I imagine that we would try and formalise things once all the electoral arithmetic is available. It’s no use talking to people about theoretical situations; it is once you have the practical situation that you need to manage that you can get down to more substantive discussions on what you want to achieve jointly, when the seats are worked out.

Selfe said it was possible these talks would be finalised by the middle of the week when announcements would be made about who the DA would go into coalition with, and what the objectives of such a coalition would be.

——-> @MmusiMaimane "@Unathi_Kwaza: A coalition with ANC is like someone trying to get on the Titanic while it sank…"

By the middle of Saturday, however, no meetings had yet been finalised.

“The furthest down the track is the Western Cape, also because the maths is so easy, ” Selfe said. There are seven hung municipalities in this province.

Selfe is the party’s go-to person on the negotiations, but Maimane has also previously admitted to having had preliminary exploratory talks with other parties.

EFF general secretary, Godrich Gardee, was the first port of call during informal discussions over the weekend, while the IFP’s Albert Mncwango and the ACDP’s Joanne Downs were on the floor for their parties.

The ANC is also likely to employ a number of leaders to do its negotiations, for example in Gauteng where provincial leaders get on better with the EFF than the national leadership. (The EFF intensely dislikes President Jacob Zuma for having Malema expelled from the party, and secretary general Gwede Mantashe for executing that process).

ANC Gauteng secretary Hope Papo announced his party would definitely go into coalition talks with other parties for Mogale City, where it needs only one seat to govern, and Ekurhuleni, where it needs four. Here it could either rope in the AIC with its four seats, or form a more complex coalition with all the other smaller parties.

“We will also discuss coalitions for Johannesburg and Tshwane,” he said.

Already on Saturday night the ANC displayed a somewhat softened attitude towards the EFF when Mantashe told News24 the four female protesters who embarrassed Zuma during his speech at the formal announcement of the election results had a right to peaceful protest.

The party needs 16 seats to govern in Johannesburg, which means it could either team up with the DA’s 104 seats, the EFF’s 30 seats, or all of the other small parties, including the FF Plus and Cope, to make up the total. Seeing that FF Plus’s Pieter Groenewald had already told Deputy President Cyril Ramaphosa that the ANC acted like a scorpion, which could sink a coalition, the last option is the least likely.

It faces a similar situation in Tshwane, while in Ekurhuleni the ANC needs only four seats and could easily team up with a party such as the AIC. – News24