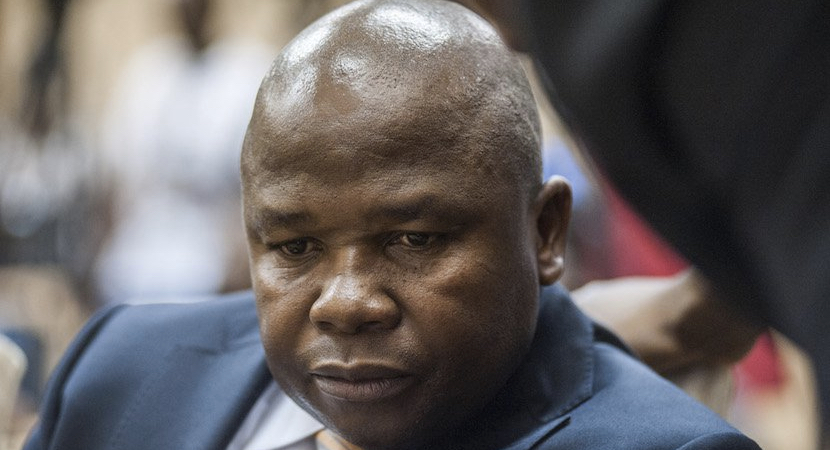 The day after the shock of respected Finance Minister Nhlanhla Nene being replaced by an unknown backbencher, David van Rooyen arrived at National Treasury with his two until now unnamed “advisors.” In this article republished with its permission, London-based Africa Confidential names the duo as “Gupta allies” Mohamed Bobat and Ian Whitley and explains the context in graphic detail. Their arrival so shook the Treasury that its Director General threatened to resign and his staff immediately dubbed the event “9/12” – a reference to the US’s disastrous “9/11” of 2001. Former Finance Minister Trevor Manuel was so incensed that he wrote an open letter that was highly critical of President Jacob Zuma, Van Rooyen and the dark forces manipulating them for publication in City Press. After Zuma’s December 9 shock (“9/12”) decision, the rand plummeted, financial shares crashed and bond yields surged. After wiping R500bn off the value of South African assets, Zuma was forced into reversing his appointment, replacing him with Pravin Gordhan, the man he had fired a year and a half earlier. Here’s the fascinating inside story from Africa Confidential, the subscription-only service which have been covering the continent for more than half a century. – Alec Hogg

Delivering the State of the Nation address at the opening of what promises to be the South African Parliament’s most turbulent year, President Jacob Zuma announced a series of measures to shore up the country’s ailing economy, including cutting government expenditure, revamping the management of state-owned enterprises and partnering with the private sector to promote domestic and foreign investment.

The measures are high on the wish list of a formerly disengaged business community which was shocked into action by Zuma’s disastrous sacking of Finance Minister Nhlanhla Nene on 9 December and the crash in share prices and the value of the rand that followed. The dismissal of Nene turned out to be the latest in a series of cabinet appointments made to circumvent resistance to the deal Zuma struck with Russia’s President Vladimir Putin last year to build nuclear power plants in South Africa. Successive Ministers of Finance and of Energy who voiced their opposition to the deal over its enormous cost were removed from office.

The main beneficiaries of the nuclear deal would have included the controversial Gupta family – three Indian brothers who have become massive beneficiaries of Zuma’s patronage. The Guptas influenced Zuma to appoint the previously unknown David ‘Des’ van Rooyen as Finance Minister, it is now generally accepted. Their intention was to secure uranium contracts for the nuclear plants in the same way they have for the coal and arms sector, according to the local press.

Another part of the strategy was to place two Gupta allies, whom Africa Confidential is able to name as Mohamed Bobat and Ian Whitley, as advisors to Van Rooyen at the Treasury. Whitley is a former head of small and medium enterprises at African Bank. When Van Rooyen was replaced at the Treasury, the two men went with him to his new portfolio of Local Government and Traditional Affairs, and appeared with him when he was sworn in on 10 December.

Bobat and Whitley, who have associations with the Guptas and their businesses, visited the Treasury before Van Rooyen’s appointment and told officials there that they would be able to sign expenditure and other authorisations on behalf of the new minister but otherwise there would be no changes. Senior Treasury officials led by Director General Lungisa Fuzile were so appalled that they threatened to resign unless Van Rooyen’s appointment was reversed.

Then there is the strange case of Van Rooyen’s childhood friend, Gaddafi Rabotapi, who, former Finance Minister Trevor Manuel pointed out in an angry open letter to Minister Lindiwe Zulu on 20 December, had known about Van Rooyen’s appointment a full month before it was announced by Zuma. Manuel also said that the proper procedures had not been followed in the appointment of Bobat and Whitley, whom he did not name in the letter, nor had it been established that they had the requisite skills for either portfolio.

Following the firing of Nene in December, it was the business leaders acting in concert with moderates in the African National Congress who forced Zuma at political gunpoint to reverse his appointment of a stooge as finance minister and re-instate the highly-respected Pravin Gordhan. Further details have now emerged about the meetings in which Zuma fought tooth and nail not to give in. At one of them Patrice Motsepe, the billionaire benefactor of the governing party, told Zuma to be quiet and listen to the business leaders. Zuma’s former wife, Nkosazana Dlamini-Zuma, the main rival of Deputy President Cyril Ramaphosa in the succession stakes, expressed shock that the President could be addressed in such a way.

Intense and high-level meetings between government and business followed in rapid succession at the World Economic Forum in Davos, Switzerland, in January. There was a follow-up meeting between Gordhan and Zuma and 60 captains of industry and finance on 29 January. Zuma met over 100 top business chief executive officers on 10 February in Cape Town on the eve of the State of The Nation speech.

At the 29 January meeting, hosted by Old Mutual/Nedbank and chaired by Gordhan, emergency working groups were set up to report within four days to: promote economic growth, take steps to stimulate foreign and local investment, revamp the management of state-owned enterprises, and take urgent steps to avoid junk status for investment. Gordhan and his officials then processed the recommendations in record time and they were fed in as the core content of Zuma’s State of The Nation speech. It was the best coordinated collaboration between government and business in 22 years of democracy, insiders said. The dramatic sequence of events has put Gordhan in the driving seat of government and all but indemnified him against dismissal.

At the Mining Indaba in Cape Town in the days before the State of the Nation speech, Zuma would have felt additional pressure from mining luminaries who shared the views of the CEOs who were directly in touch with the President, such as Simanye’s Neal Froneman, Pallinghurst’s Brian Gilbertson, Adam Fleming, Clifford Elphick of Gem Diamonds, Africa Invest’s Rob Hersov, hedge fund manager Julian Schrager, Lord Robin Renwick of Hannam and Partners and Ivanhoe’s Robert Friedland. Global players who also added to the pressure on Zuma included the Indian steel tycoon Lakshmi Mittal, who was contemplating a major investment when news of Nene’s dismissal broke.

President Xi Jinping of China is also understood to have delivered a message via diplomatic backchannels to protect China’s 20% state in Standard Bank. The country’s two richest families – the Oppenheimers (Nicky and his son Jonathan) who recently sold the diamond giant De Beers to the ailing Anglo American, and the Ruperts (Johann) who command a huge international empire – kept a low profile through the affair. The events also revealed that the two more recent plutocratic dynasties – the Motsepes and the Guptas – are increasingly at daggers drawn as they vie for influence over the ANC.

Deputy President Ramaphosa is backed for the succession by the Motsepes. He is married to Patrice Motsepe’s sister Tshepo but is trailing Zuma’s former wife, Nkosazana Dlamini-Zuma, in the succession stakes. She is backed by her former husband and the Guptas. Motsepe’s other sister, Bridgette, a billionaire in her own right, is married to Minister in the Presidency Jeff Radebe, a Ramaphosa ally.

At yesterday’s shambolic opening of Parliament, the Economic Freedom Fighters walked out of Parliament in their signature red overalls chanting ‘Zupta must fall’ – a cryptic reference to the Gupta family and Zuma. Mosiuoa Lekota, Leader of the Congress of the People, an earlier breakaway from the ANC, was the first to lead his party in a parliamentary walk-out proclaiming that he was not prepared to listen to a man who had violated the constitution and was unfit to lead the country.

On the eve of the opening of Parliament, the two main opposition parties which stand to take votes from the ANC in the coming local government poll – probably on 3 August – brought charges against Zuma in the country’s highest court for violations of the constitution. The Democratic Alliance and Julius Malema‘s EFF joined forces to have the President declared unfit for office over his refusal to abide by the Public Protector’s binding ruling that he should reimburse the state for the multi-million upgrades to his retirement compound.

A finding against the President would create a constitutional crisis as Parliament, in which the ANC has a clear majority, would be in conflict with the Constitutional Court, which is the supreme constitutional authority. A finding by the court that Zuma was guilty of a serious violation of the constitution would provide grounds for his impeachment.

By offering to repay an undisclosed sum on the eve of the court hearing, Zuma faced further accusations that he had breached his oath of office by consistently lying to the country about his role in the use of taxpayers’ money in the financing of his Nkandla homestead.

The formidable potential of civil society has been re-activated in recent weeks and moves are now afoot to launch a major national organisation in March to hold government to account and monitor its progress.

The five-year project will be headed by church leaders by the Anglican Archbishop of Cape Town, the Right Reverend Thabo Makgoba and will include business leaders, academics, professional and community organisations and non-governmental organisations.

Some of the comments posted on Alec Hogg’s Facebook page.