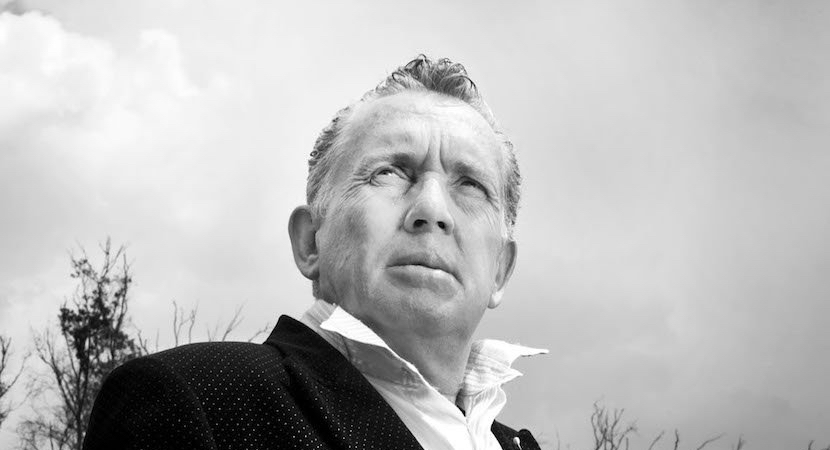 One of journalism’s jewels, Barry Sergeant, has passed away. He spent the last few years of his life farming in the Eastern Free State, battling with cancer which required invasive surgery in 2013. As you’ll read from my personal reflections below, he was a good friend, but more importantly, one of those more rare of our species, an honourable man. My faith tells me Barry is in a better place right now, and apart from renewing acquaintances with his family, is swapping tales with our old pals David Carte, Flip Meyer and, who knows, maybe even his icons Hunter S Thompson and Johnny Cash? For everyone who believes that democracy relies on the twin pillars of a free press and free courts, his loss is immeasurable. – Alec Hogg

The self-named Hyena of South African financial journalism has written his last word. The masterful, one-of-a-kind Barry Sergeant has breathed his last. His contribution was immeasurable. His loss to the media world immense.

It was my privilege to work with Barry for around half his lengthy career. First when he joined David Carte’s team at Business Times in the early 1980s. Then, after he’d become disenchanted with the hypocrisy of supposedly independent investment analysis, for most of my time at Moneyweb.

The first time we met was memorable. David and I were interviewing him for a job he wanted at Business Times. Why, David asked, would a freshly graduated LLB choose to join our motley crew over a far better remunerated life in the courtrooms? Because when it is done right, said our Barry, no work on earth is more honourable than journalism.

He never lost that belief. And stuck to that credo throughout his career, perhaps because of it never receiving the recognition he deserved. Barry delved often and deeply into the underbelly of society, often at great personal risk, to uncover what vested interests preferred to keep hidden. It cost him heavily, the stress doubtless contributing to the cancer that required invasive surgery three years ago.

Barry used his final years wisely, relocating to a remote farm in the highlands of the Eastern Free State where he rekindled a deep love of nature inherited from early years on a Botswana farm. For instance, he loved talking about what man can learn from bees, a passion he developed early in life.

We spoke far too infrequently since then, mostly when we tried to launch an investigative journalism unit that he was keen to manage. Unfortunately, I was unable to raise the sponsorship. But it never bothered Barry. He loved writing his numerous books, supplementing that income with the odd contribution for open minded publications.

Book writing came rather late to this lifelong devotee of Hunter S Thompson. It began one fateful night in September 2005 when the late David Gleason woke me with the news of Brett Kebble’s murder. I immediately called Barry and the two of us rushed to the Moneyweb offices to work through the night. After tapping contacts we were able to report that it was an assisted suicide – a conclusion hotly denied at the time, and only finally admitted years later following numerous investigations.

Barry fenced with Kebble over many years – including being sued in a personal capacity over a research report for his stockbroking employer when he was taken right to the steps of the High Court. But Kebble rated him so highly he also offered Barry big bucks to start a competitor to Martin Welz’s Noseweek. Mr Sergeant, obviously, turned it down.

Given his skills and the background with Kebble, Barry was the obvious author for a book on Kebble and after the suicide was approached by a number of publishers. But writing books is a high risk business, so we agreed Barry should stay on the Moneyweb payroll and work out of his office across the hall from mine, focusing on the book but throwing us the occasional bone to earn his keep. We were all so proud when his excellent book was finally published – even more so when it hit the best-seller list.

During a period when online journalism was still developing, Barry was in a league of his own, dubbing himself “Hyena” after taking a youthful Julius “Cockroach” Cobbett under his wing in our small but potent investigative unit. They were a formidable team, blessed with the unusual persistence of champion athletes and the skills of forensic auditors.

Barry was the inaugural winner of Taco Kuiper’s rich prize for investigative journalism, an award the late proprietor of the Facts Investment Guide would have applauded. I was also there the evening the Pretoria Rotary Club presented him with the Paul Harris Award, the highest accolade the movement can bestow. It is a shame on the judges of other journalism competitions that he was never afforded greater recognition.

News of Barry Sergeant's death has left me feeling quite hollow. He was a true eccentric, a gentleman and a meticulous journalist. RIP

Perhaps that’s because Barry Sergeant was exactly what a great investigative journalist had to be – a non-conforming eccentric original. Barry loved wearing his cowboy hat. For most of the time I knew him, he sported pointy winkelpickers boots. He loved his black jeans and a white dress suit shirt. And when the mood took him, his computer would blast out Johnny Cash’s “Ring of Fire” – immediately sparking the entire newsroom into a spontaneous chorus.

Such was Barry’s stature that I’ve received quite a few mails and calls this morning from former colleagues of ours like Byron Kennedy, Monique Vanek and Janine Bester who miss him already. Also, a note from top rated independent analyst Mark Ingham who wrote: “I knew Barry fairly well, although I have not been in touch for a few years. So sad to learn of his passing. Barry was a man of high intellect, an individualist and unconventional. Way back I said to Barry that I saw a certain Ernest Hemingway aspect in him – which he enjoyed. For whom the bell tolls…. ” Quite.

Goodbye my friend. The Big Boss sure broke the mould after making you. Hopefully the emerging pack of investigative journos will study your story and be sufficiently inspired to apply your methods. South Africa desperately needs an army of young Barry Sergeants to tackle vested interests. Your race might be run but your memory and sacrifice will live on. Rest in Peace.