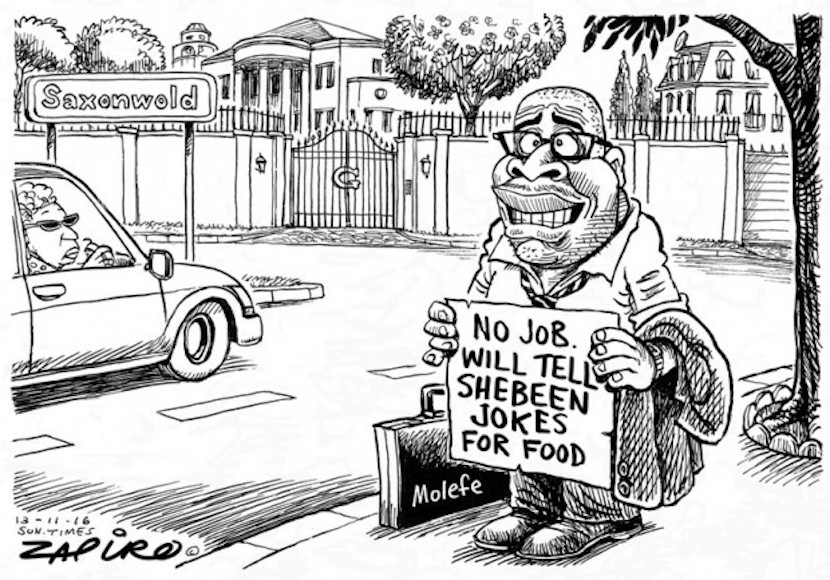 Ascension to Parliament by disgraced former Eskom CEO and Zupta “asset” Brian Molefe sparks memories of the last years of Apartheid. Even after money ran out as a Border War drained the coffers and foreigners cut off credit, political leadership refused to accept the inevitable. It took a stroke to remove President PW Botha, with a subsequent change in leadership opening the road to a negotiated settlement. Dozens of historical examples and the modern day disasters in Syria, Zimbabwe and Venezuela tell us human beings find it very hard to relinquish it. Especially those who risk being censured for their criminality. The most important fact for South Africa today is that President Jacob Zuma doesn’t fancy the idea of going to jail. There are already 783 corruption charges on the table and dozens more that can be added to them the day he leaves the Union Buildings. So for as long as Zuma is allowed to control the State’s levers of power, he will apply them for his own ends. Yesterday’s news of Molefe heading for Parliament is a precursor to another Gupta raid on SA’s national assets. The Zupta strategy is so transparent you can almost see the bags of swag heading for Dubai. The big question now is whether the majority of South Africans care enough to do anything about it. – Alec Hogg

COMMENT: The imminent swearing-in of disgraced former Eskom chief executive officer Brian Molefe as an African National Congress MP comes as little surprise. It fits in with a ‘fight back’ campaign that is being waged by the state capture lobby led by President Jacob Zuma. There appears to be a coordinated approach to shift attention away from the Gupta family to a focus on the evils of ‘white monopoly capital’ and the perceived ‘white’ banking system in South Africa. – DP

Timing is everything in politics. Just amazing how the so-called banking collusion  story broke out just in time to deflect attention from the drama of the opening of parliament and President Jacob Zuma’s state of the nation speech, dubbed by one newspaper as ‘the state of disunity’. Instead of a focus on state capture, the focus shifted fortuitously to currency trading collusion. This followed the whole saga about apartheid-era billions being thrown at then “Afrikaner’ interests, like Absa (acquirer of Sanlam-owned Bankorp, recipient of a soft-loan lifeboat in the mid-1980s).

Also the rumour – which was dismissed by African National Congress secretary general Gwede Mantashe – that Brian Molefe would be winging his way to parliament was confirmed on Friday, the day after Zuma delivered his reply to the Sona (state of the nation address). It is now speculated that Molefe will fill the shoes of the embattled deputy Finance Minister Mcebisi Jonas – before possibly replacing Pravin Gordhan himself as Finance Minister in due course. It is a case of cooking the political goose by raising the temperature one degree at the time. Jonas has to go because he has said too much about being offered a bribe by the Guptas to take up the Finance Minister’s post.

It all reeks of President Zuma’s fight back campaign. Back against the political wall within and  without the ruling ANC, he is unleashing every weapon  he can to stay in office and to fend off threats to his political territory – carefully carved out for the ‘tenderpreneur’ class since the Polokwane national conference of the ANC in 2007.

Of course in the Sona reply on Thursday, President Zuma, of course did not mention state capture. The focus of the speech was on radical economic transformation of the economy and to end the stranglehold of whites of the economy. His exact words were “… some of our compatriots are determined to defend and protect the status quo and ensure that ownership, control and management of the economy remains skewed in favour of a racial minority”.

Zuma went on: “The message of Sona2017 is clear and simple. The political freedom gained in 1994 must be accompanied by economic freedom for the black majority in this country, and the Africans in particular. We are not going to be apologetic about that.”

“Radical socio-economic transformation will help us to grow the economy in an inclusive manner, ensuring true reconciliation and prosperity.”

Zuma’s words indicate that there is a new enemy out there – white capital, sometimes referred to as ‘white monopoly capital’. While Zuma didn’t use those descriptions, he did refer to whites getting land in the past which was not their due. Digressing from the prepared speech he said: “We (the ANC) are not racist… we were taught by our organisation not to be racism. This is not racism.” He explained that a solution – to the land problem – had to be found. Finding a solution “for the country.. that is what we are doing. We are not going to stop.” They are ominous words, indeed, as he explained that he had to mention the word ‘whites’ because it was a real issue.

When evidence of corruption is presented, it is ignored…If Hawks and NPA refuse to prosecute then civil society will

If the speculation that Molefe will be in the executive as deputy finance minister – which would make him the political boss of the Public Investment Corporation which manages the trillion-rand Government Employees’ Pension Fund – it is clear that Zuma is on an offensive against big business.

Zuma said: “Yesterday, the Competition Commission announced that it has concluded an investigation into price fixing and market allocation in the trading  of foreign currency involving the  rand, covering the period from 2007 and found that some banks have a case to answer. This matter is still under investigation.” He received applause from the ANC benches.

The president is, what President Donald Trump would call in ‘bigly” fight back mode. What Brian Molefe’s exact role in rolling out the fight back campaign remains to be seen, but he is likely to be at its centre-stage.