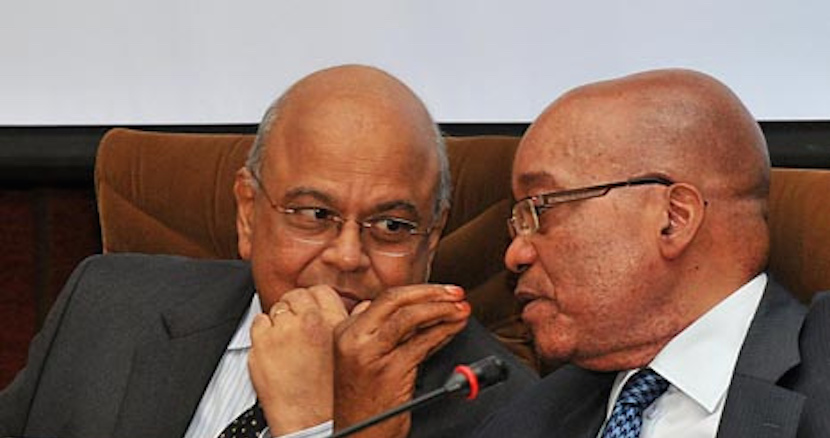 After pulling in all his markers with allies over the weekend, SA President Jacob Zuma has played his last, desperate card. Insiders say the deeply compromised politician is about to put everything on the line in a major cabinet reshuffle which will eject his critics, most obviously Finance Minister Pravin Gordhan and those who recently challenged Zuma’s leadership. With only eight months to go before the ANC decides at its elective conference on its next President, Zuma has now switched to self-preservation mode, using all the power at his command to ensure his preferred successor (his ex wife) is appointed, thus keeping him out of jail and ensure the continuation of an entrenched system of patronage. The young nation is entering a critical point with a binary result. What happens next will determine whether SA survives as a functional Constitutional Democracy, or slides into the morass that has bedevilled so many newly independent African nations. – Alec Hogg

At 11:45 today SA’s Presidency announced that the Treasury team led by Finance Minister Pravin Gordhan has been instructed to abort their roadshow to international investors after the first morning. Gordhan, his deputy Mcebisi Jonas and the Treasury’s top brass who are trying to sell SA bonds to global money managers have been told to cancel the New York leg of the roadshow and return from London tonight.

The thunderbolt from SA’s embattled President Jacob Zuma could hardly have been telegraphed more emphatically. Insiders say Zuma has been patiently building up to this moment for months, and after caucusing over the weekend, believes he now has the political heft within the ruling party to wield his big stick and rid himself of enemies in the cabinet.

The Rand dropped sharply on the news of Gordhan’s humiliating recall. It is poised to hit Nenegate-like skids if, as now appears likely, Gordhan is replaced by the compromised former Eskom boss Brian Molefe, a Zuma favourite and close associate of the crony capitalist Gupta family who was recently appointed to Parliament as an MP.

From his side, Gordhan will have been expecting this for some time and will have been doing some lobbying of his own. The reaction of his supporters in civil society, business and within the ANC ranks is sure to determine the country’s future.

Those inside the anti-Zuma camp liken this to the second State of Emergency in 1986. They say this is the biggest crisis that the new South Africa has faced. As the President, Zuma is legally entitled to appoint whomever he likes to cabinet without having to explain himself. All cabinet members in SA “serve at the pleasure of the President.”

If you didn't enjoy the first movie, you're going to hate the sequel.#Gordhan #Zuma pic.twitter.com/UcMK5kde6f

But the kind of reshuffle envisaged is sure to galvanise his opponents, potentially even splitting the ANC. As a political insider put it “If Zuma fails here, he will lose what credibility he still possesses. He simply cannot afford that to happen. He has been planning this for some time and believes he has the support to push through his plans. We are at a critical moment.”

The insider added that developments over the past two weeks reflect the level of desperation by those pulling the levers of power. Among bizarre recent events have been a burglary in the office of the Chief Justice; Zuma’s defence of an incompetent Social Welfare minister; the escalation of hostility between Treasury and SA Revenue Services; and the high court finding against another Zuma favourite, Police General Berning Ntlemeza.

London’s leading SA-focused analyst, Nomura Emerging Market economist Peter Attard-Montalto says this is a shock: “Zuma has laid down a clear red line between him and Gordhan.” He said that it laid down a market which Gordhan either had to obey to show Zuma is viewed as stronger, or disobeys and challenges Zuma to fire him.”

Montalto added in a note to clients this afternoon:” This is a dramatic shift in risks clearly given the baseline had been originally that a reshuffle would not see PG touched. The chances of PGxit are now clearly higher. However PG is used to playing such high stakes political poker games. It seems this week is going to be really decisive either way. It is also possibly that Zuma wants PG there if he only reshuffles the deputy.”

He continued: “I believe today could be a test of the water to undertake a reshuffle. The Presidency has seen such a strong ZAR and is wondering how much of a political shock it can take – they do watch these things closely. So far the market reaction has been very muted, suggesting they could indeed go ahead with a reshuffle. The market should not forget they are part of the circle of cause and effect. In this sense the lack of risk premia here is inadequate but also a causal factor…. I don’t think this is considered enough by investors.”

Nomura’s EM chief concludes that this is going to be a key week: “Let’s wait watch in coming days. As we’ve said previously, a reshuffle is ready to go and something Zuma wants to do. It could be deployed rapidly if Zuma does want to do it. Watch for Brian Molefe into Deputy (or maybe Minister position); where loyalist Buthelezi goes; and Nkosazana Dlamini-Zuma into Presidency as a minister for transformation or similar. She can go there without becoming an MP if Zuma removes one of the other current two non-MP ministers.”

(Bloomberg) – South Africa’s President Jacob Zuma has instructed Finance Minister Pravin Gordhan to abort a week-long roadshow to meet with investors and rating companies in London and the U.S., according to people with knowledge of the matter.

Gordhan, who left South Africa on Sunday to lead a delegation that includes business executives and labor union representatives, referred queries to the Presidency and said by phone Monday that he is carrying on with his plans to meet investors in London.

Gordhan, Deputy Finance Minister Mcebisi Jonas and Treasury Director-General Lungisa Fuzile received text messages from the Presidency telling them to cancel their trip, according to the people who spoke on condition of anonymity because they weren’t authorised to comment on the matter. Jonas was still in South Africa when he got the message.

"If true this will trigger speculation of a cabinet reshuffle which will be detrimental to the economy."

(Bloomberg) – South Africa’s rand erased its advance to become the worst performer in emerging markets on concern the nation’s political risk may rise after President Jacob Zuma ordered his officials to return from a roadshow.

Also read: Ahead of Zuma’s next outrageous move, a reminder from men who paid ultimate sacrifice

The currency sank 1.6 percent as of 11:26 a.m. in Johannesburg to 12.6341 per dollar, reversing gains of as much as 1 percent. President Zuma instructed Finance Minister Pravin Gordhan to end a week-long roadshow to meet with investors and rating companies in London and the U.S., according to people with knowledge of the matter. The currency’s decline is the steepest among its emerging peers.

The Save South Africa campaign believes President Jacob Zuma is acting with unbridled recklessness in instructing the Minister of Finance and his Deputy to cut short their visits to the UK and USA. These visits have been carefully planned with business and labour as part of South Africa’s efforts to stave off a downgrade of our sovereign investment status. It is an initiative that the President himself has endorsed.

The effect on the Rand in the aftermath of the President’s announcement constitutes a form of economic sabotage.

It is a sign of extremely weak leadership and completely unsettles perceptions of South Africa’s stability — as can be seen in the way the rand has tumbled on foreign exchange markets. A rapidly depreciating rand has a massive impact on the South African economy, and its ability to effect economic transformation, whether radical or not. The ultimate victims will be the poor, and Zuma must be held accountable for his style of politics.

It is clear that he has no concern for South Africa, its image abroad, or the people who will suffer the consequences. Parliament should summon the President to explain and account for his actions.

But if Zuma goes on to recall Gordhan and/or Jonas from office in a Cabinet reshuffle, it will be clear that what we are really seeing is the final, desperate push in the state capture project.

President Jacob Zuma may be in the mood for power politics — but he can rest assured that South Africans will not take this lying down. This increasingly-desperate President must be stopped in his tracks, and we call on all sectors of society to unite in opposition to his dangerous strategy that is aimed at furthering the state capture project.

Clearly, Zuma and his cohorts can no longer wait to get their hands on the public purse. Access to the state kitty, through the front door of National Treasury, is more important to them than the national interest. They want to loot, and loot with increased haste, while they still can.