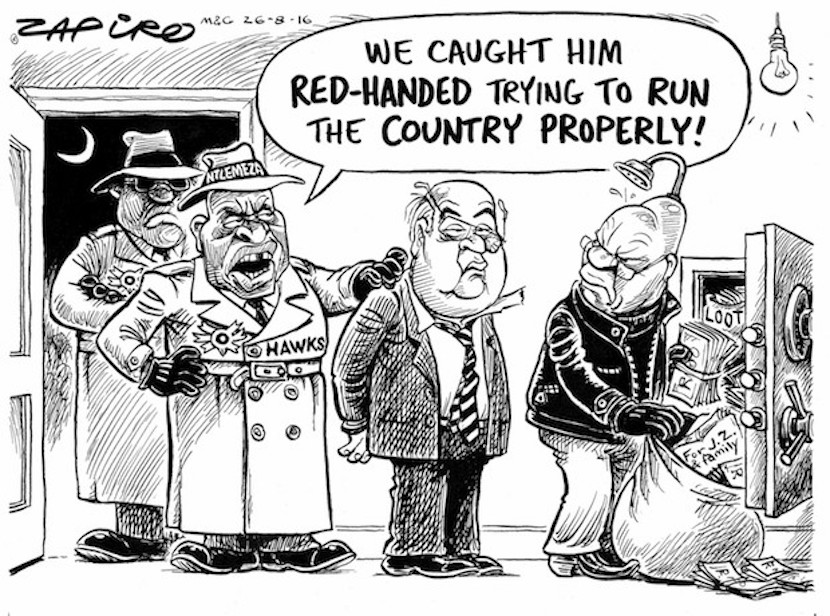 The cabinet reshuffle has been top of mind since January when President Jacob Zuma pulled out of the World Economic Forum in Davos, with the decision creating a clear split in the ruling party. The appointment of Brian Molefe into government and Nkosazana Dlamini Zuma leaving the African Union, only add fuel to the fire. The issue has been skirted around since but following yesterday’s move to recall Gordhan from an investor roadshow, it’s firmly back on the table. The net has been cast wider though according to sources close to the matter, with economic cluster ministers Ebrahim Patel and Rob Davies also apparently part of the shuffle, plus a few other ministers who don’t sit on the Zuma side of the room. But to put more truth to these rumours of Finance Minister Pravin Gordhan being fired, according to the Bloomberg report below, Zuma told senior leaders at the South African Communist Party that he’ll fire Gordhan because he’s blocking him from leading the government. Many may argue that could be construed as stopping him and his Zuptoid allies from getting their hands on the National Treasury cookies. And if the rumours do become reality, it will be the majority of South Africans that suffer, and a few that benefit, but that seems to be the modus operandi of the Zama Zama Zuptoids. And with a currency that has lost more than 60 cents to the dollar in two days to break through the psychological R13 barrier, the recent short term wins have been wiped out. And if we thought Nenegate was devastating, a PGxit could be the straw that broke the camels back. – Stuart Lowman

(Bloomberg) – South African President Jacob Zuma told senior leaders of the South African Communist Party that he plans to fire Finance Minister Pravin Gordhan, according to three people with knowledge of the matter. The rand plummeted.

Zuma told officials from the party, which is allied to his ruling African National Congress, during a meeting on Monday in Johannesburg, according to the people, who were present and asked not to be identified because a public statement has not been made. He didn’t say when he planned to fire Gordhan.

Zuma, 74, ordered Gordhan to cancel meetings with investors in the U.K. and the U.S. and return home on Monday, a day after he had flown to London to begin the week-long roadshow.

A later meeting of the top six leaders of the ANC was to be held after the SACP gathering and there was no indication that they agreed with the decision to fire Gordhan. Zizi Kodwa, a spokesman for the ANC, said the people were misinformed.

Speculation that Gordhan is on the verge of being fired has swirled for months, as he clashed with Zuma over the management of state companies and the national tax agency. While Gordhan has led efforts to keep spending in check and fend off a junk credit rating, Zuma wants to embark on “radical economic transformation” that he says will tackle racial inequality and widespread poverty.

Is Jacob Zuma really going to recall Pravin Gordhan? The battle for treasury is intensifying if that is what will happen.

“I don’t know if it’s true that Gordhan will be fired,” Enoch Godongwana, the ANC’s head of economic policy, said by phone. “If that were to happen, it would be tragic for the economy. We are trying to move our growth to better levels. The growth numbers are beginning to reflect a positive trend. This sort of issue will be damaging.”

Zuma said during the meeting with the Communist Party he had taken the decision to remove the finance minister because he was the president with responsibility for leading the government and Gordhan was blocking him, according to the people.

“What is becoming very clear is that there is no agreement, there are serious disagreements and factional in-fighting and serious divisions,” said Roland Henwood, a politics lecturer at University of Pretoria, said by phone on Tuesday.

Gordhan’s dismissal may be delayed because ANC officials will be preoccupied with ceremonies to honour Ahmed Kathrada, the anti-apartheid activist jailed with former South African President Nelson Mandela, who died Tuesday at the age of 87.