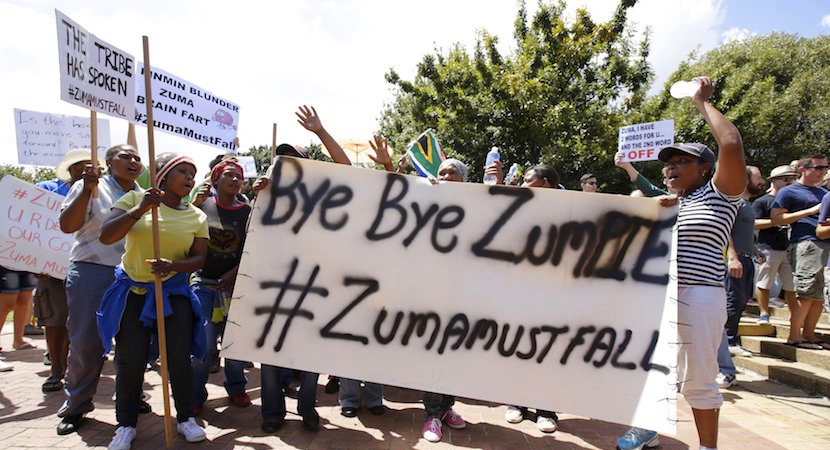 It really is now or never for SA’s young Constitutional Democracy. The ANC’s wrecking ball president has thrown down the gauntlet. If his citizens refuse to rein him in; if Jacob Zuma’s audacious, externally initiated gamble of firing the incorruptible Pravin Gordhan and Mcebisi Jonas succeeds, then SA faces a very bleak future. The damage is already apparent – S&P’s decision yesterday to downgrade the country’s debt to junk status will make access to global credit markets increasingly difficult and more expensive. The impact of business confidence of what the sector calls an “irrational and irresponsible” move will halve an already paltry economic performance – on the news of Gordhan’s firing Nomura’s Peter Attard Montalto slashed his GDP growth forecast for this year from 1.1% to just 0.2%; for 2018 from 1.5% to 0.7%; and for 2019 from 1.7% to 1%. Lower growth means less jobs. And Montalto’s numbers translate into another three years of an economy expanding more slowly than the population – a recipe for massive social unrest and disaster. Ask Venezuela, Zimbabwe, Argentina et al. Those who embrace these complexities see the obvious consequences of Zuma’s destructive decision. Their number includes veteran political journalist Donwald Pressly who does what Gordhan urged South Africans and “joins the dots” in the sobering analysis which follows. – Alec Hogg

Donwald Pressly’s Opinion – Reading the political tea leaves is always difficult, but things are not looking too good for the political future of President Jacob Zuma with opposition to his savage reshuffle growing – in particular within the governing African National Congress. It is significant that the ANC Mpumalanga premier David Mabuza, a Zuma faction acolyte, has not only threatened the official opposition with retaliation if the party marches on Luthuli House, the ruling party’s headquarters in Johannesburg, but also that people who vote against President Jacob Zuma in parliament will be dealt with… dissident ANC MPs would simply be evicted and replaced. In an added element, the Inkatha Freedom Party’s advice to the DA not to spark violence by marching on the ANC headquarters as planned for Friday was heeded – and DA leader Mmusi Maimane announced that it would end at Beyers Naude Square. Cape Messenger director Chris Hart comments, however, that Zuma may believe he still has the upper hand despite the rating downgrade received last night.

It is hard to read the tea leaves, indeed, but former Standard Bank investment strategist Chris Hart says President Jacob Zuma may well not have carried his ANC constituency with him when he hurriedly announced his cabinet reshuffle last week, booting out Finance Minister Pravin Gordhan and his deputy, Mcebisi Jonas.

But Hart believes that President Zuma is counting on a sufficient – if, nevertheless, now reduced – majority in the ANC and that it will save his bacon. If Zuma is right in this reading of the situation in the ruling party and he goes on to survive April’s protests, the anticipated vote of no confidence in the National Assembly and moves to impeach him “he will survive to the end of his (presidential) term in 2019”. He may even survive the S&P downgrade announced last night.

Indeed, if Zuma survives the next few weeks of political turmoil, South Africa is likely to face a economic watershed. It would be like being in a boat at the edge of a waterfall. It seems calm before the boat reached the tipping point, Hart noted.

Meanwhile Mangosuthu Buthelezi, Inkatha Freedom Party leader, said:“We must exhaust every (peaceful) avenue to protect our country.”  He said yesterday afternoon that the IFP had urged the DA not to march on Luthuli House as this would be viewed as “a provocative act”. Buthelezi said: “Our country can ill afford the sparking of violence and loss of blood…”

Speaking at a press conference in Durban, the IFP leader reminded journalists that former President Nelson Mandela – before he became president – ordered the shooting of supporters of Zulu King Goodwill Zwelethini who marched in 1993 on Shell House, the then headquarters of the ANC in Johannesburg. The march at the time turned violent. The marchers were calling for the protection of traditional rights during the constitutional peace talks.

However Buthelezi, who said the president had failed South Africa, supported a combined opposition party call to march on the Union Buildings, but said: “We believe mass action should be the last resort.” The IFP leader said the opposition parties had not yet seen a response to the request to the speaker of the national assembly – Baleka Mbete – for another vote of no confidence in parliament against President Zuma. “We call for calm and a rational approach to prevail. Let us do everything… to avoid violence. If we must resort to mass action, let us say that we have done what we could to avert disaster.”

He said if a vote of no confidence were passed, Deputy President Cyril Ramaphosa would take over as head of state as the president would be required to resign.

Signficantly the Deputy President – also talking in Durban at an investment conference – said the current political developments were part of a process of renewing political leadership “and getting rid of greedy people”.  He called for people to unite to fight for the values fought for by former President Nelson Mandela and ANC leader Oliver Tambo.

If ANC still had hopes of leading this country to a better economy, Zuma would be gone a long time ago. But they don't care.

Significantly Gwede Mantashe, ANC treasury general Zweli Mkhize and Ramaphosa – three of the top six in the ANC, opposed the dismissal of Finance Minister Pravin Gordhan and his deputy.

Hart said that absentee MPs in the ruling ANC may be pivotal in a vote of no confidence vote. “The dentist’s appointment could be more important (than voting in the National Assembly),” he said. A stayaway by ANC MPs may prove to be more significant in achieving a vote of no confidence in Zuma than MPs siding with the opposition – which would open them up to victimisation later.

Hart is right, however, if the president survives the madness of his actions in the past week, South Africans need to look to a long haul with spectacularly bad leadership remaining in place until the ANC elective conference in December. Even then if Zuma survives until then, his annointed successor, his ex-wife Nkosazana Dlamini-Zuma, is likely to be elected. That will mean more of the same eating-at-the Gupta-family-trough politics until the national election in 2019.