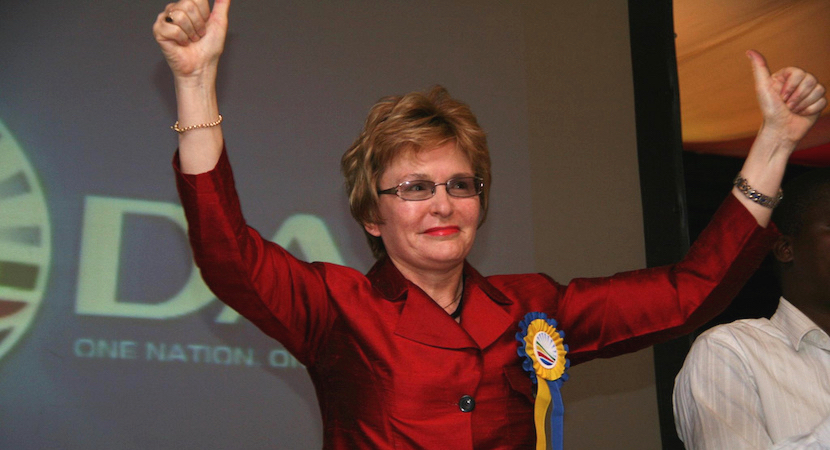 CAPE TOWN — It’s a bit of a side-show, the Helen Zille – Mmusi Maimane scrap, because for the DA to convince black voters it’s a viable coalition ruler – if not an alternative to the ANC – she and her thinly spread liberal allies are quite frankly, a load too heavy to drag along. The DA has moved on, in the ruthless way parties do, regardless of historic debts or contributions and is now wooing black voters more successfully than ever. Tweets about colonialism having contributed positively are clutter and baggage, extraneous to its main purpose of getting into government, now distinctly possible. The ante between the two rivals has been upped to such an extent that Maimane pulled the trigger prematurely when the party decided to suspend Zille; by saying it was immediate. It exposes how much he’s invested in her going. A simple legal check would have told him she can appeal the finding. Here Donwald Pressly who has been covering national politics since well before 1994, unpacks the DA dynamics, knowing the players and their histories as intimately as he does. It’s a fascinating peek into the DA machinations and personalities and the histories that drive them. Delayed resolution will prove costly. – Chris Bateman

There is no doubt that the pending suspension of the Premier of the Western Cape, Helen Zille, from her own party is going to be an extremely messy political affair. It started off badly on Saturday when the federal executive voted in favour of her suspension. The party leader Mmusi Maimane stuffed it up, quite frankly, by announcing that the suspension was immediate.

Apparently – as Zille pointed out – this was not procedural in terms of the Democratic Alliance’s own rules. Now she has until Tuesday to make representations against her suspension. The federal executive, under the leadership of a long term liberal and former PFP party worker James Selfe, hurriedly issued a statement correcting the leader’s announcement. An urgent advisory was sent to the media. All terribly messy, indeed. For all accounts, Zille has armed herself for a long siege in the party’s dock. A tweet about colonialism – which is viewed as racist by many black commentators – is the issue which could end the career of Zille.

Mark Lowe, a former DA MP, wrote at the weekend: “Helen Zille’s suspension is a big, big mistake by Mmusi Maimane & the DA. Besides the obvious hypocrisy, it puts a catastrophic dent in any realistic hope for the DA meeting its confidently predicted 2019 election victory. The ANC and EFF must be ecstatic at this spectacular DA own goal.. Note too, the complete silence from all the other DA public representatives, Effectively banned from speaking publicly and too afraid of losing their seats if they do. The centralisation of power is complete… What kind of ’liberal’ party behaves like this?” He was joined by a group of others with a similar view. In contrast, Coenraad Bezuidenhout, a former party worker who was the right-hand man to Sandra Botha (leader of the opposition from 2007 to 2009) was scathing of Zille: “Listening to Zille’s further explanations on 702 this morning I am left quite cold. I often thought she achieved her impressive results in the DA by running the party like a fiefdom, the way she manipulated individual and shared futures. Once you did that, claiming unfairness in an individual event just because you happen to be the victim does ring a bit hollow.” He suggested the punishment meted to Dianne Kohler-Barnard, MP, should be the guide. (She was found guilty of undermining the party through reposting a Facebook post and demoted). Bezuidenhout believes Zille should be demoted to an ordinary MPL and made to pay a serious fine. He probably is in tune with the new leadership’s thinking.

The long and the short of it is that Maimane has had enough of his former leader. Also, the bulk of the party’s leadership with the notable exception of Bonginkosi Madikizela, the acting Western Cape leader, voted in favour of her suspension. Another former ‘Prog” Athol Trollip voted against her as did all the remaining black leaders – represented in the federal executive – from the other provinces. Trollip’s vote against her, of course, is not surprising because he was pushed out as Leader of the Opposition in the national assembly by Zille’s then favoured candidate Lindiwe Mazibuko. Mazibuko later lost Zille’s favour, but that is another story.

The bitterness between Trollip and Zille runs deep. He has bounced – some would say rocketed – back as the Mayor of Nelson Mandela Bay. He was a candidate against her for the national leadership of the party in 2007 when Tony Leon resigned as leader. The body language at the time when Trollip was a parliamentary leader and she was the national leader told the story – they did not like each other much. When Mazibuko beat Trollip it was the schism which broke the liberals’ control of the Democratic Alliance. To this day there is a lot of bad blood between the liberals in the party. They are now so divided that the new elements of the party – including black nationalists, social democrats and just political opportunists – have snatched power from the liberals. Trollip himself reported on Zille’s involvement in the campaign for Mazibuko. Upon hearing that he was up for re-election – in 2011- as leader of the opposition, he offered Zille – who was party leader at the time – his resignation. She believed there would not be a contest. But later, he reported: “Helen got quite intimately involved in the election because the outcome was important to our party. It was a party in transformation. She sets the vision and she obviously wanted to have some change. I embraced the fact. It is her prerogative to do that.” Trollip went back to the Eastern Cape Legislature – defeated this time, but not for long.

Helen Zille will be out of the DA, rightly so, for a stupid tweet. Jacob Zuma is protected by his comrades for his corrupt activities. 🇿🇦🇿🇦

Then came the bitterness of the Mazibuko breakup – she announced she was leaving politics after the 2014 election – led to a flurry of liberals to leave the party’s top ranks. Tim Harris, who was the finance shadow minister and possibly a contender for the national leadership one day, left to become CEO of Wesgro. A new recruit to the liberal cause Lance Greyling, the Energy shadow minister, left to the City of Cape Town. Lesser known liberals like Belinda Walker – a former deputy mayor of Cape Town and a great ally of Zille – threw in the towel in 2016. There are others too numerous to mention.

Finding the liberals in the Maimane shadow cabinet is a difficult task. David Maynier, the finance spokesman, is an old Prog but it is hard to think of many others.

Geordin Hill-Lewis, a key member of the white young boys’ club – a term I concocted for my book Owning the Future: Lindiwe Mazibuko and the Changing Face of the DA (published in 2014 but now a bit of an historical account admittedly) – who was part of the konkel to get Mazibuko elected in 2011, was ironically the person who led the campaign for Helen Zille to leave as national leader in 2015. He and MP Gavin Davis – also believed to be part of the liberal caucus – “came round to discuss the situation on the afternoon of 8 April 2015″. It was agreed that it would create “an impossible situation if both Athol (Trollip) and I ran”. Trollip had announced he was standing as federal chairman at the 2015 congress. Zille decided not to stand again. Some say Hill-Lewis and Davis were ruthless, but Zille paints a positive picture in her autobiography Not Without a Fight. She reported that the two were her closest advisers “precisely because they told me what they thought I should hear and not what I wanted to hear”. Notably, Davis and Hill-Lewis are not screaming their support for Zille from the hilltops now.

The bulk of the liberals – who did not leave party structures – are now close to Maimane, particularly Davis, Maynier, Trollip and Hill-Lewis. Zille’s closest liberal friends are scattered or have deserted her. Unfortunately, the liberals have been unable to convince her of her wrongdoing in the twitter debacle. She says about leadership  that “the (party) leader boils down to decisions and actions informed by intuition: one has to ‘read’ a situation, and try to get as ‘close to reality’ as possible before reaching a conclusion.” She failed in the tweeting saga to take her own advice.

The more you try hard to justify colonialism, the more you destroy DA.

The consequences for the DA are probably not dire. Most of those outraged at the party’s stance – the suspension and her possible axing as premier ultimately – are white liberals. They have no other home. They are faced with the prospect of undermining Maimane – the party’s first black national leader – by fighting for the liberal principle of ‘freedom of speech and opinion’. It is, frankly, a political dead end. Maimane has to ‘win’ against Zille now – or lose face among the black voters who need to move to the party if the DA is to get near power in 2019. eNCA interviewed Tony Leon, the former leader, on Tuesday. He was asked if this Zille saga would spell disaster for the DA. He said if in a year’s time the matter was still burning, it would be damaging, but if it was resolved quickly, it would be become yesterday’s news.

The prospect of being part of a coalition government at least,  is now a realistic one as the ANC’s electoral fortunes deteriorate and are damaged by the continued rule of President Jacob Zuma. The Zille project IS yesterday’s news, yesterday’s politics. It would be best for her party if she gracefully exited. As Tony Leon pointed out, to drag out this fight would mean to undermine her remarkable political legacy.