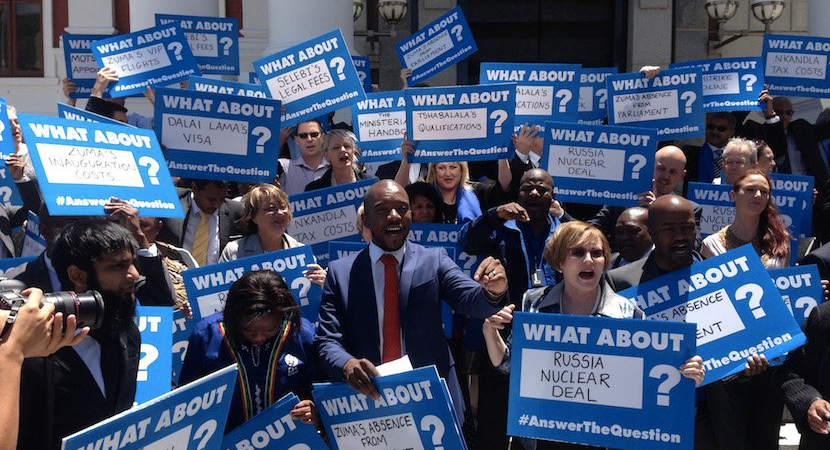 CAPE TOWN — Adding some levitas to the DA’s leadership spat with a sprinkle of satire and some clever nuclear war terminology, former national deputy leader of the Independent Democrats, Simon Grindrod, brings a more human face to an ill-timed debacle. It again illustrates how much politics is the art of compromise, as painful and bruising to the ego as that might be. The human face emerges in his depiction of DA leader Mmusi Maimane’s as not exactly revelling in Zille’s banishment to her kingdom of the Western Cape. This is contrary to the popular media-created perception that he’s fed up to the back teeth with her and can’t wait to kick her derriere out of the party altogether. In anybody’s book that would make Maimane a pretty heartless individual, given Zille’s disproportionate contribution to the party and her part in his climb to power. Cutting away all the clever satire, that’s a more credible portrayal of their relationship. He would know that politicians rip one another apart on the assembly floor and in public, but if you saw them together in the pub afterwards, you’d shake your head in disbelief. – Chris Bateman

The negotiated settlement hurriedly announced yesterday by DA Leader Mmusi Maimane and Premier Helen Zille was somewhat of a panicked affair. I am surprised they didn’t learn from Mr Zuma and announce it after midnight on YouTube.

It was more like an announcement of a ceasefire than a lasting peace agreement. Perhaps both sides needed a truce to treat their wounded and bury their dead. During this DA mini-CODESA moment, I half expected Julius Malema and his fighters to crash a bakkie through the glass doors of the venue and slap someone.

Faced with the option of all-out civil war, both sides had little choice but to attempt a rapprochement of some kind. The losses and destruction were mounting up on both sides.

Helen Zille sounded like she was apologising to her husband for overspending on the Woolworths card again. It must have been painful, given she is the one who found him a job in the first place. The cheek of it. To her enormous credit, she took a deep breath (maybe a slug of Bells too) and got it over with in two minutes flat.

Mr Maimane looked like he was going to burst into tears throughout the entire ordeal. The poor man’s nerves must be shattered. He knows the Iron Lady is going to get him back, there is nowhere to run and nowhere to hide.

Mr Maimane did successfully manage to neutralise his opponent by exiling her back to the Cape where she is to remain under house arrest in Leeuwenhof until 2019. She is permitted to leave the estate only for the occasional authorised shopping trip. Sadly, he could not get her to hand over the WMD’s, her feared Samsung Galaxy smartphones.

These remain ominously hidden in various secret bunkers scattered around Wale Street. They still pose a serious threat to world peace if another first strike tweet is launched without warning. The good news is that he extracted a concession on destroying her spare phone battery packs – under UN supervision.

There were some notable absences from the happy occasion. The omnipresent Mr Selfe was decidedly unpresent, perhaps having been sedated by his doctors. It was left to a hefty looking  DA MP to coral the journalists afterwards and extract his Ms Zille from the broom cupboard in which they appeared to be hosting the reunion. Who was this MP and does he moonlight as a nightclub bouncer after voting in the House?

It remains to be seen if the fragile peace will hold, there are plenty of grumpy white folks upset that their icon has been humbled unfairly. There are also plenty of excitable black folks who feel only a life sentence, without parole, would have sufficed as punishment.

I think the DA will need another TRC after this trauma, a Twitter Reconciliation Commission, to rebuild trust and unity among members.

For now, we must all agree that the absolute imperative is removing the ruling party. The ANC are on their knees and, instead of delivering the coup de gras, the opposition are squabbling over which axe to use to finish them. They were in danger of losing the opportunity. It is thankfully not too late.

All in all, the entire episode has been an exercise in futility. Neither side is happy, and neither leader comes away smelling of roses. I doubt they will avoid divorce before 2019, and by that I mean 8.19pm.

I feel sympathy for both individuals in this debacle. They are both clearly committed to the future of our nation. The vast majority of South Africans are decent, fair and big-hearted. The best for the future of opposition is for everyone to shake hands and put it behind them.