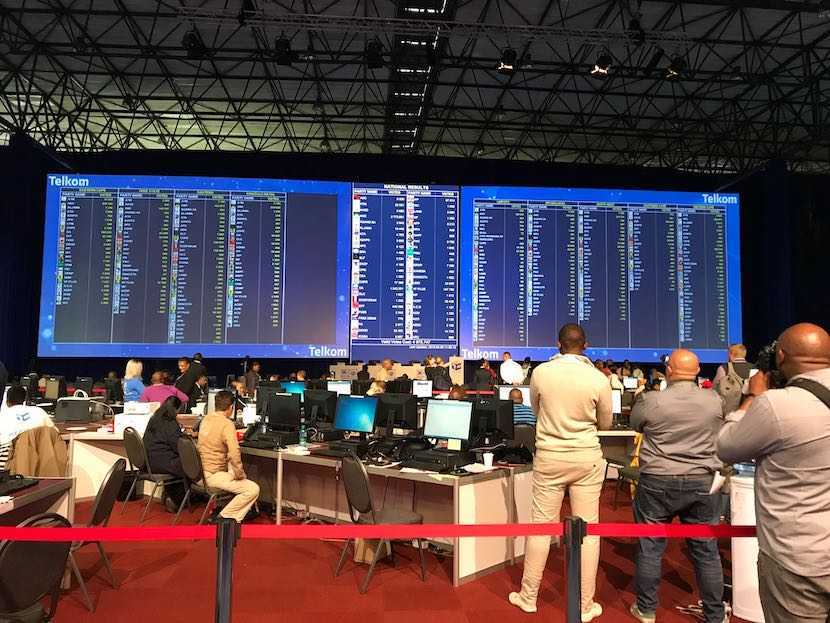 With all of the votes in the national poll counted and seats allocated, there will be 19 fewer ANC members in South Africa’s 27th Parliament, the sixth since democracy was embraced in 1994.

In what lines up as a straight swap, the EFF has cemented its position as the country’s third biggest political party and will be sending 44 MPs to Cape Town in the new session, an increase of 19 on its previous representation of 25 members. Although the far left EFF has grown its share of the vote and in numerical terms is easily the biggest seat winner, it polled three percentage points lower than forecasters had predicted.

On the right of the political spectrum there is a near identical swap with the Democratic Alliance losing five seats and the Freedom Front Plus gaining six. The DA is still comfortably ahead as the official opposition with 84 seats, whereas the FF+’s representation has more than doubled from 4 to 10.

The Inkatha Freedom Party retained its position as the fourth largest bloc with a four seat gain to 14, while the African Christian Democratic Party picked up an additional set to 4.

Only two new parties gathered enough votes to send members to the House – the controversial ATM Party, reportedly supported by former president Jacob Zuma, will have two members; while former Cape Town major Patricia de Lille’s GOOD Party scored enough votes to secure two seats – a disappointment, however, as her new party received only half the representation of her former Independent Democrats in 2009.

The Aljama Party has secured its first seat while AGANG  and the APC both lost their representatives.

While the rest of the contest is settled, the battle for Gauteng is still on a knife edge. With only 35 of the 2 771 voting districts still to be captured, the ANC’s share is only fractionally above 50%.

Gauteng reflects the way voters have punished the ANC in every province, but mostly in the three key regions.

At the IEC headquarters, Biznews’s Linda van Tilburg has been busy with short, punchy interviews – click on the links to listen: 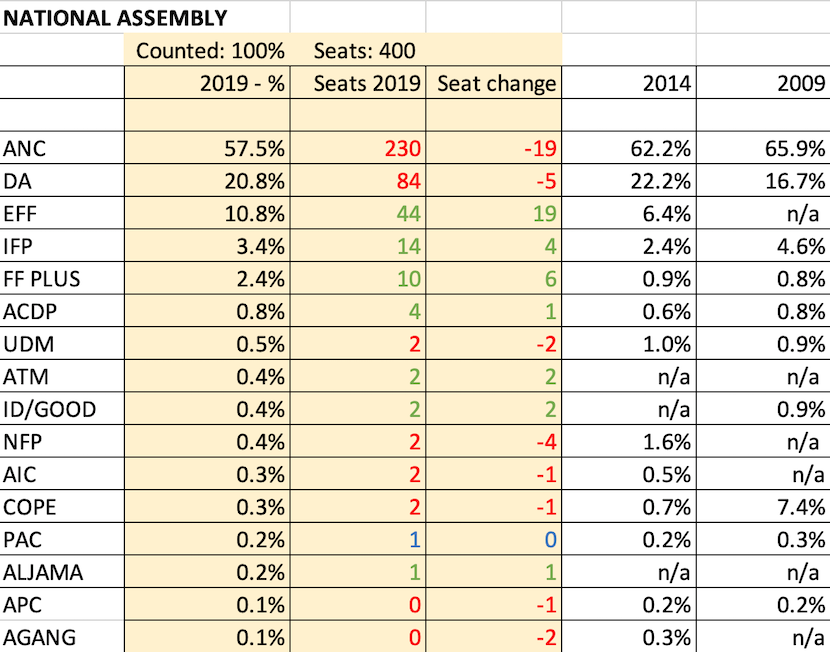 The predicted close contest in the Gauteng province was a head bobbing affair with the ANC scoring fractionally above the required 50%, ending at the smallest possible majority with 37 of the 73 seats. As is the case elsewhere in the country, there is a clear improvement here for the EFF, Freedom Front Plus and ACDP.

The Democratic Alliance prevailed in the Western Cape, overcoming a difficult few months on in-fighting to hold onto the Premiership of the only non-ANC run province. The DA dropped 3.9 percentage points on its victory of five years ago, most of that going to former colleague Patricia de Lille’s newly formed Good Party which did significantly worse than her old Independent Democrats. Also, despite enormous effort by the ANC and liberal use of the Ramaphosa card, the ruling national party’s share of the Western Cape vote fell by slightly more than the DA’s, again reflecting the punishment the party was handed at provincial level   The Freedom Front Plus was once again a surprise package in the Western Cape and will send a representative in this provincial parliament for the first time. Best of the smaller units, however, was the African Christian Democratic Party, which almost trebled its 2014 share of the vote, although that wasn’t enough to add to its sole representative. Although it did much better than five years ago, the EFF continues to struggle in this province, while the Cape Party, which is agitating for independence, fell well short of the votes needed to gain its first seat.

The ANC was heavily punished in KZN, home province of disgraced former president Jacob Zuma, with the party posting a double digit percentage reverse. Mangosuthu Buthelezi’s IFP regained its position as the official opposition with a four seat improvement, shading the DA which gained a single seat. The EFF made excellent progress in KZN, with its share of the vote rising exponentially bringing it close to the party’s national average. IFP breakaway, the NFP, seems to have shot its bolt, being the big loser alongside the ANC in this provincial election.

The ANC’s efforts to retain the Northern Cape worked out, but even though the opposition failed to impose coalition politics in the province, they have managed to pull a hefty seven percentage points away from the ruling party. Once again FF+ will celebrate here, gaining its first representative in this provincial parliament but as we’ve seen elsewhere, COPE is a spent force and will lose its sole member. The EFF has improved to come close to its current natural share of around 10% of the provincial vote, but the expected challenge from Patricia de Lille’s Good party did not materialise.

In more predictable provincial elections elsewhere, the ANC has lost support but retained comfortable majorities. In the Eastern Cape the ANC’s share fell only slightly to 68.8% (70.1%) and in Limpopo its decline was also modest to 75.5% (78.6%).

In the other provinces, however, the reverse was larger. In the province previously run by ANC secretary general Ace Magashule, the party’s majority fell almost nine percentage points to 61.1% (70%). The ANC’s majority in Mpumalanga dropped almost eight percentage points to 70.6% (78.2%). The reverse in the North West province was more than five percentage points at 61.9% (67.4%) With virtually all the votes counted in the North West the ruling party’s share has dropped from 67% to 62% with a similar trend in the Free State where the ANC is at 62% from 70%.