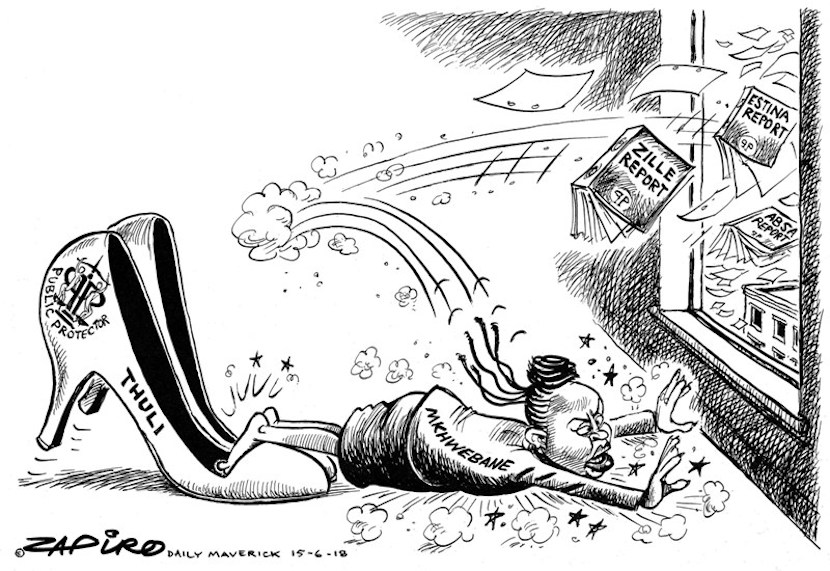 In a weird post-Zuma twist of fate, South Africa’s antithesis of a Public Protector must await a Constitutional Court ruling on a costs order against her before parliament’s allegiance to President Cyril Ramaphosa is tested regarding her possible removal. The ironies of a constitutional democracy trying to heal after a decade of aberrant, corrupt political behaviour abound as the rules set up to protect us fall in favour of the inept and dishonest. With a string of excoriating high court pronouncements bolstering both these descriptions, Public Protector, Busisiwe Mkhwebane, can only be removed from office by a two thirds majority of the National Assembly. They must find her guilty of misconduct or incompetence. It’s a rule set up to prevent abuse of power by the President, who of course must watch powerless as Mkhwebane continues to blatantly protect beleaguered Zuptoids. Besides the Absa lifeboat debacle that exposed her incompetence and/or Zuptoidal-leanings, she has now gutted the provisional report of her predecessor, advocate Thuli Modonsela, removing the remedial action proposed for the hugely cynical Estina Dairy Project “upliftment” scam in the Free State. Like her former fearless leader, she can only be deposed by a vote in a virtual no-confidence debate, which might well prove a telling barometer of Cyril’s support. Story courtesy of the Daily Maverick. – Chris Bateman

The Public Protector is again in the news and still for all the wrong reasons. This time the bad news for the office of the Public Protector was based on the so-called Vrede Dairy project, the role of Estina (Pty) Ltd, which is linked to the Guptas and her report in respect of this issue.

The terms of reference were phrased as follows by the Public Protector:

“Whether the Department entered into a Public Private Partnership (PPP) agreement for the Implementation of the Vrede Dairy project; whether the Department failed to manage and monitor implementation of the terms of the agreement in relation to budget evaluation, expenditure control and performance by Estina and whether the prices for goods and services procured were inflated, specifically alleged expenses in respect of construction, processing equipment, procurement of cows and administration costs.”

Treasury found that the relevant head of department in the Free State, a Mr Thabethe, was involved at “every stage of the identification and appointment of Estina”.

He signed the 99-year rent-free lease in Estina’s favour and the agreement with Estina. The department made payment to Estina, without any form of oversight and without verifying how funds were spent. Despite the project having been justified, on the basis that the beneficiaries would benefit from it, the department paid R114m to Estina, before even identifying any beneficiaries.

The premier and Mosebenzi Zwane, who was then the responsible MEC for agriculture, were identified by Treasury as being involved in various suspicious aspects of the project.

In particular, the report stated that they enabled, encouraged and authorised Thabethe to execute the implementation of the project. According to Treasury, both the premier and Zwane were involved in concluding the 99-year rent-free lease agreement with Estina. The premier signed a delegation of authority to Zwane, to conclude a rental agreement between the department and the municipality.

Zwane then delegated further authority to Thabethe. The provincial executive committee, which the premier headed, then approved Thabethe’s request to implement the project, and supported the sourcing of additional funding of R84m from the province. Zwane, as MEC, personally contacted the MEC for finance to request an urgent, expedited a R30m payment to Estina.

This decision of the Public Protector to narrow the scope of her inquiry was startling.

The omissions in her investigation included:

Unsurprisingly, the result of the Public Protector’s report was to gut the provisional report of her predecessor, advocate Thuli Modonsela, and to remove the remedial action proposed therein and which had been recommended by Treasury.

In the review brought separately by the Democratic Alliance and the Council for the Advancement of the South African Constitution to set aside the final report, the Public Protector sought to defend her position by pointing to resource constraints, something that does not appear to be a problem for her office when it comes to the SARS issue of investigative units, even when this issue has already been the subject of NPA and a judicial commission of inquiry’s investigations!

Understandably, Judge Ronel Tolmay, who heard the review application in the Gauteng High Court, was not impressed with these arguments.

Of particular significance is the following passage from Judge Tolmay’s judgment:

“Interviewing and taking statements from the implicated officials and interviewing the journalist who had reported on the project, seems to me to be quite simple and could not have resulted in huge expenditure. The PP’s failures to undertake these simple and cost-effective measures are, to put it lightly, of serious concern, as it may point to a concerning incomprehension of the nature and extent of her obligation towards the people of this country and her obligations in terms of the Constitution and the PP Act.”

But the judgment setting aside the report went even further in its searing criticism of the Public Protector:

This is not the first time that the present Public Protector has been the subject of a sustained judicial rebuke.

The Absa lifeboat case is an equally serious blot on the copybook of the Public Protector. It has to raise immediate questions about the ability of the present Office of the Public Protector to contribute meaningfully in the fight to curb the scourge of corruption that has taken place, particularly over the past decade.

Unfortunately, the Constitutional Court has still not given judgment in respect of the cost order made against the Public Protector in the Absa lifeboat case. This meant that Parliament postponed a debate about her fitness to hold the office. This judgment only increases the need to hold this inquiry. It should no longer be postponed. DM