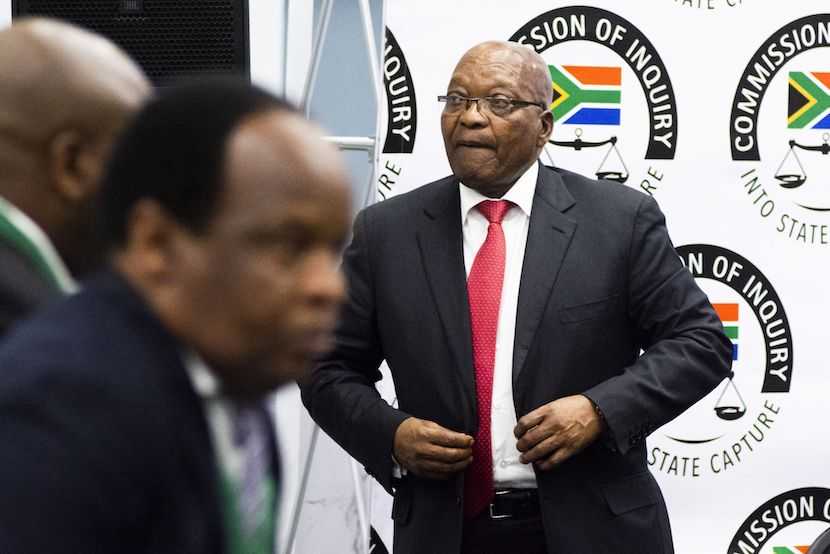 Judge Ray Zondo has highlighted how the commission which was established by Zuma in January 2018 is yet to hear any concrete evidence from him on his alleged role on state capture. Initially recommended by former public protector Thuli Madonsela, the state capture inquiry was tasked with investigating and reporting on corruption, fraud and money laundering within government and state-owned enterprises. The Pretoria High Court approved Madonsela’s recommendation and Zuma effected the inquiry. Chief Justice Mogoeng Mogoeng appointed Zondo as the head of the commission and Zuma accepted this. However, after 257 witnesses have testified with over 37 implicating the former statesman, the inquiry has been subject to various excuses from Zuma, delaying the legal body’s work and progress. The Zondo Commission is set to finalise proceedings in March 2021. – Bernice Maune.

Zuma’s application to have Zondo recused from the commission has been dismissed. Zuma’s legal representatives, Mabuza Attorneys had brought grounds for the recusal in a 102-page affidavit which they filed over the weekend. In it, they alleged he would not afford Zuma a fair hearing as they were once friends and Zondo had called witnesses who would fuel a narrative painting Zuma as corrupt and responsible for state capture.

IMPORTANT: Fmr Pres Zuma and his lawyers cannot excuse themselves unilaterally from the #ZondoCommission.
If they leave without getting permission from DCJ Zondo’, they run the risk of being charged with contempt – a criminal offense.
The subpoena against Zuma stands

Right after hearing the outcome of the recusal application, Zuma and his lawyers staged a walk-out. This is in defiance to the commission which required him to take the stand and testify in response to affidavits filed by witnesses. Zondo said he would reflect on Zuma’s walkout and make a statement in due course.

Recusal had no valid legal basis

Zondo has thrown out the recusal application, stating it had no legal basis and failed to convince of his perceived bias. On the matter of their friendship, Zondo said that Zuma had not disputed that they never socialised and he was not invited or informed of major happenings in the Chairperson’s family.

Zondo agreed he had met Zuma at his home after being appointed to lead the commission but says it was not necessary to declare this as it was Chief Justice Mogoeng Mogoeng who had the final say in his appointment.

“Chief justice would not have been bound by Zuma but would have applied his mind. There is no sound reason why Zuma raised the personal relationship, three years after my appointment to chair the commission,” said Zondo.

There was also no merit to Zuma’s statement the commission had heard evidence mainly from witnesses called to implicate him. The ANC leader has been given the opportunity to respond through affidavits and by attending but declined both.

“I am satisfied that the applicant’s contention has no merit. I am entitled and obliged to ask witnesses questions as commission seeks to establish truth on matters. Even a judge in a court of law is entitled to ask questions.

“I conclude having had regard to all the points by the applicants including press statements and releases, I conclude that the applicant has failed to meet the test for bias. The recusal application is dismissed,” said Zondo.

In response, Zuma’s attorney, Muzi Sikhakhane said his team would take the judgement on review and lodge a complaint.

“I have no position to put for debate. Before we excuse ourselves from the meeting. The first is the instruction is to review your decision and we will take it from there. You will realise that you have become a judge in a matter that involves yourself.

We’ve been instructed to lodge a complaint about you at the Judicial Service Commission in the issue where you’ve made yourself a witness and judge,” Sikhakane quipped.

Advocate Paul Pretorius commented the summons was still valid and Zuma was obligated to take the stand at the commission.

“The applicant would be acting in defiance of the summons. It is up to you chair to decide if proceedings would proceed or not. It is not open to the applicant (Zuma) excusing himself,” said Pretorius.

I'm happy with the dismissal, Zuma should stop with his tricks. Zondois here to stay

Zuma is playing for time, hoping a ANC special NGC will help his cause. #StateCaptureCommission

You can't be a judge and a witness at the same time.