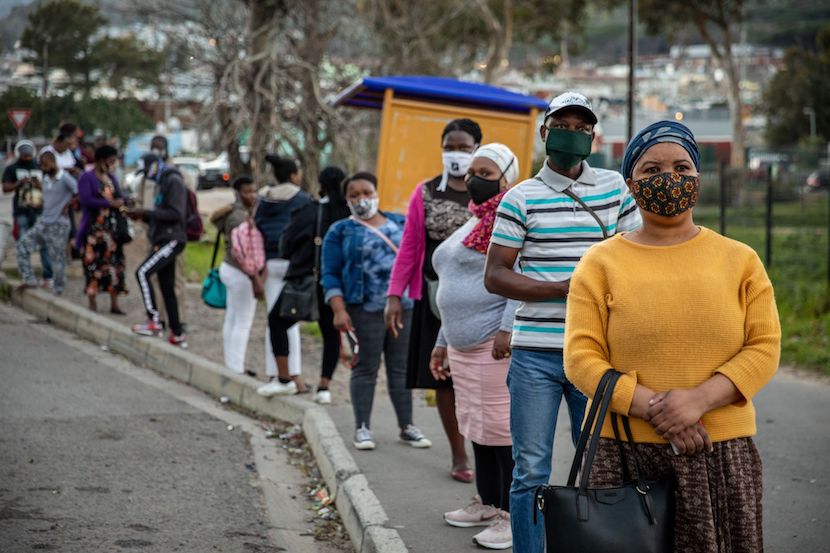 Even before Covid-19 was a reality, the South African economy was buckling under the pressure of myriad issues. Corruption, both in the public and private sector, continues to pillage the nation of what it has. What’s more, billions have been pumped into the multiple SOEs that continue to drain essential funding – that could be used to alleviate the poverty many in SA face. Once the virus broke through our borders, things only got worse. The national lockdown that was implemented to slow the spread may have been necessary, but there’s no denying the further damage it did to the already fragile economy. As businesses shut their doors and industries were put on pause, millions of hard working South Africans lost their livelihoods. But what will the country look like once the Covid-19 pandemic has passed? IRR project manager Terence Corrigan asks just that. ‘Even as we worry about the procurement and rollout of vaccines – we dare not lose sight of this question. The pandemic will ultimately pass, but its impact will be severe and long-lasting’. This article was first published on the Daily Friend. – Jarryd Neves

What will South Africa look like when the Covid-19 pandemic has passed? As we struggle through the health crisis and the resultant dislocation – and even as we worry about the procurement and rollout of vaccines – we dare not lose sight of this question. The pandemic will ultimately pass, but its impact will be severe and long-lasting.

For South Africa, it has meant an anticipated economic contraction in excess of 7%, millions of jobs lost, businesses pushed to the brink (if not bankrupted), and a fiscus that has reached the point at which the president has had to say ‘we do not have the money’ (although in the reified world of public finance, that is often an elastic idea). This is a crisis by any reasonable understanding.

But as I have contended many times before, this was not entirely a matter of a pandemic. Rather, South Africa has been in the grip of long-running economic retardation. At its most basic, South Africa never truly gained the momentum of many of its emerging market peers in the aftermath of the global financial crisis – but this event itself compounded problems that already existed, which had been evident in the stubbornly high levels of unemployment and the failure of the mining industry to take optimal advantage of the extraordinary possibilities of the commodities boom of the 2010s.

The question to tack onto what South Africa will look like after the pandemic is how South Africa will respond to it. The word ‘recovery’ is much in vogue – though it is uttered with an inflection of inevitability. A ‘recovery’, in this perspective, is an inevitability, not a challenge. It needs merely to be steered. How misguided that may prove to be!

In one of his tweeted interventions, finance minister Tito Mboweni expressed himself, obliquely, on the issue: ‘Never before (like now) has it become URGENT that we enable and support young people who want to go FARMING and start small businesses. We must give them land leases urgently and ensue that banks and other relevant financial institutions support SMMEs..Call to Action!’ (sic)

A bit clumsy to be sure – Twitter is not noted for encouraging elegance – but correct enough in its overall sentiments. Any sensible post-pandemic strategy, a ‘recovery’ worthy of the name, should regard take-up of business and entrepreneurial opportunities as a key priority.

Yet there is an unfortunate element of familiarity to this. Both farming and small businesses have long been nominal priorities for the government. (Small business development has a policy pedigree that goes back to the time of PW Botha…) Neither has received the attention it deserves.

Indeed, if the ‘we’ referenced in the minister’s tweet is the state or its various agencies, ‘enabling and supporting’ operators in these fields has had a dismal record. ‘Pathetic’, as his cabinet colleague Pravin Gordhan once described measures to assist small businesses.

Indeed, it would be interesting to understand just what support he is proposing. He mentions leases for land and ‘ensuring’ that banks support small enterprises. Revealingly, both imply a commanding role for the state – as may well befit the government’s conception of a ‘state-led’ recovery.

Leases, for example, retain ownership (and therefore ultimate control) of land with the state, granting conditional rights to beneficiaries. It is an approach that has been much abused by incompetent or venal officials. By way of illustration, last year’s putative ‘release’ of some 700 000 hectares of land turned out to be a case of dispossessing a number of established black farmers.

But beyond the vague examples, it is not clear just what is meant to be on offer. In reality, from a state-centric perspective, it is difficult to see anything meaningful. The state does ‘not have the money’. Neither does it have either the expertise or the capacity to play such a role on any meaningful scale – as complaints about delays in payment of invoices, or the condition of agricultural extension services or, latterly, the state of the Land Bank indicate.

Yet the real failings of the state in its ‘developmental’ role are more elementary. It has been the failure to ensure an environment that would make doing business – as a farmer or a small entrepreneur in this case – a rewarding option. Perhaps this can be described as a failure to observe the maxim of ‘first do no harm’.

If farmers are not supported by generous subsidies as are their counterparts elsewhere, and if the government is resolutely opposed to granting title to land reform beneficiaries, they must also contend with inadequate infrastructure and administrative bottlenecks in the allocation of water licences. If small businesspeople do not get slews of juicy government contracts, high-quality mentorship or support from the country’s diplomatic corps for exports, they must also deal with indifferent if not dysfunctional municipalities and regulatory and labour regimes almost calculated to undermine them.

Both suffer under the burden of crime and lawlessness, a threat to safety and to their assets. Both struggle with a mismanaged power crisis – a crippling factor for any modern industry. And both in varying ways are subjected to ideological hostility, whether directly as ‘land thieves’ or more generally as ‘capitalists’ seeking a ‘profit’.

Over the past year, despite hopes that the pandemic would prompt serious introspection, this direction has been confirmed rather than challenged. The pandemic showed the depth of commitment on the government’s side to race-based policy, when it decided that support for embattled tourism enterprises would be contingent on BEE status. (Incidentally, research by small business specialists SBP some years ago showed a distinct lack of enthusiasm for, or benefit from, BEE by small firms – even those owned by black people.) This seems set only to tighten, as new and more prescriptive employment equity rules are planned. The president has said that racial policy should be enhanced.

Regulations quietly introduced in respect of the hospitality sector – hit particularly hard by the pandemic – will push up labour costs and add to the demonstrative burden.

Meanwhile, the completely counterproductive push for expropriation without compensation continues apace. This is despite the dampening impact it has had on investment and will continue to have in future. It is a mortal threat to agriculture, though its application elsewhere (in company shares, for example) make it just as much of a threat to other sectors.

What will the country look like when the pandemic has passed? Unfortunately, on its current trajectory, rather as it did prior to the pandemic – only with the destruction wrought by the pandemic on top of it.

What appears not to be contemplated, the finance minister’s remarks notwithstanding, is any serious change to the current environment. Those aspirant (and existing) farmers and small businesspeople can expect little enough to ‘enable and support’ their efforts.

That is, of course, unless ‘we’ are prepared to discard a good measure of the dangerous ideological baggage that ‘we’ have forced them to carry.