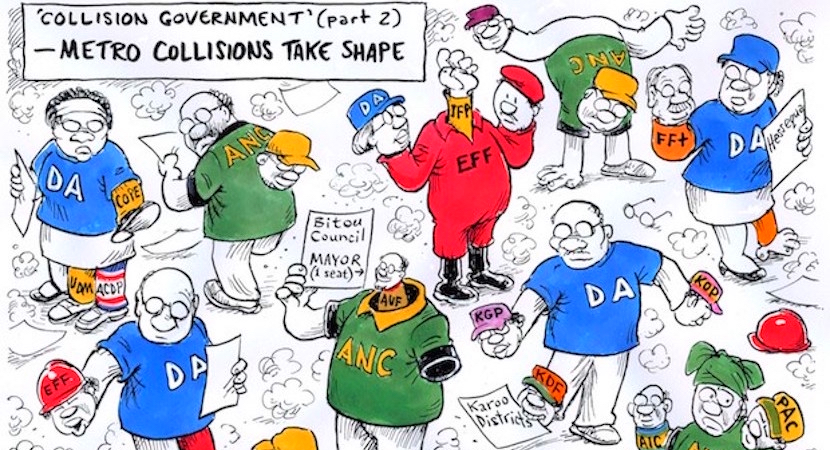 South Africa’s political parties face intense negotiations over the next few days as voting delivered no outright winner in a third of SA’s 213 local councils. In the economic hub of Gauteng, the only one of eight councils secured by any part is MidVaal where the Democratic Alliance increased its majority.

Apart from getting a hiding in the Metros, the ANC faces the prospect of having to broker deals – or lose power – in a number of its rural fortresses. In the Eastern Cape, the DA retained the Kouga council and a further 3 councils will now require coalitions to govern. The ANC has also lost its grip on four councils in the Free State; three in the North West; three in Mpumalanga and two in Limpopo.

The ANC is now faced with some difficult decisions in the key Metros of eThekwini (Durban) and Ekurhuleni (East Rand) where to retain control it will need to secure an alliance with the EFF. Indeed, even though its share of the bote barely moved, the EFF has come out of these elections holding trump cards in a number of contested Metros – particularly in Nelson Mandela Bay where the two big parties deadheated.

The ANC’s biggest reverse came in KZN where the formerly dominant force has retained outright control of just 24 of the 62 councils in the province. The IFP celebrated victory in 16 councils which it will run outright, while the DA achieved a historic first victory in the province of uMngeni. There are 21 KZN councils that will require coalitions.

Coalition politics is also a feature in the Western Cape where 16 of 39 councils will need horse-trading between parties while the same situation prevails in 10 of the Northern Cape’s 36 councils.

While there will be much happening in all of those areas, the biggest stakes are in Gauteng. Here’s the breakdown of the major Metro battlegrounds with the most rational combintions for the ruling coalitions.

There are many possible combinations for a controlling coalition but the one which would have the greatest philosophical alignment is DA, Action SA, PA, IFP, VF Plus and ACDP. 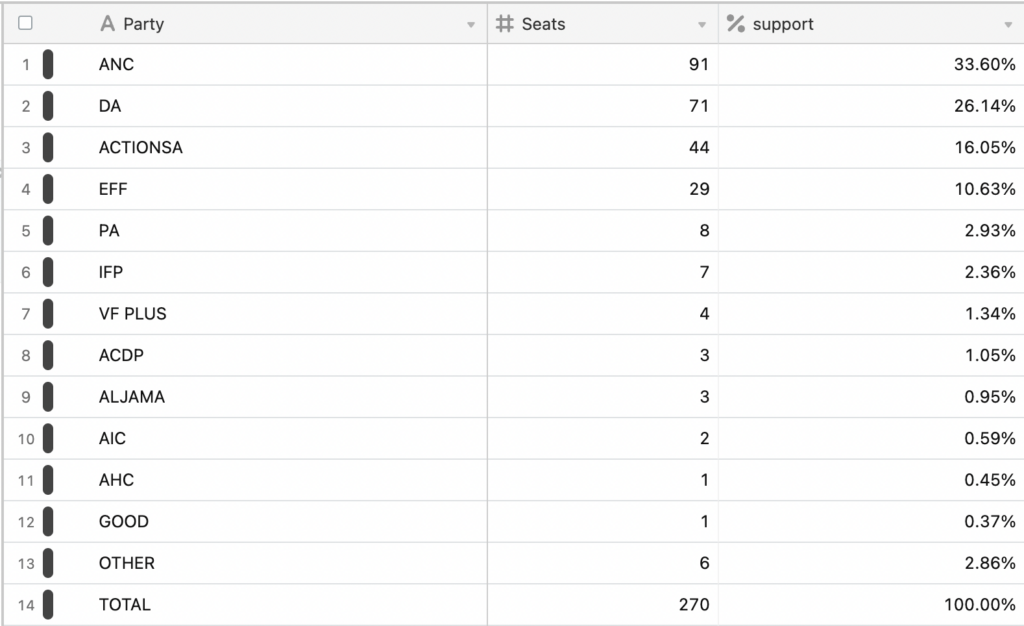 The most likely combination here would be DA, Action SA, VF Plus and ACDP. 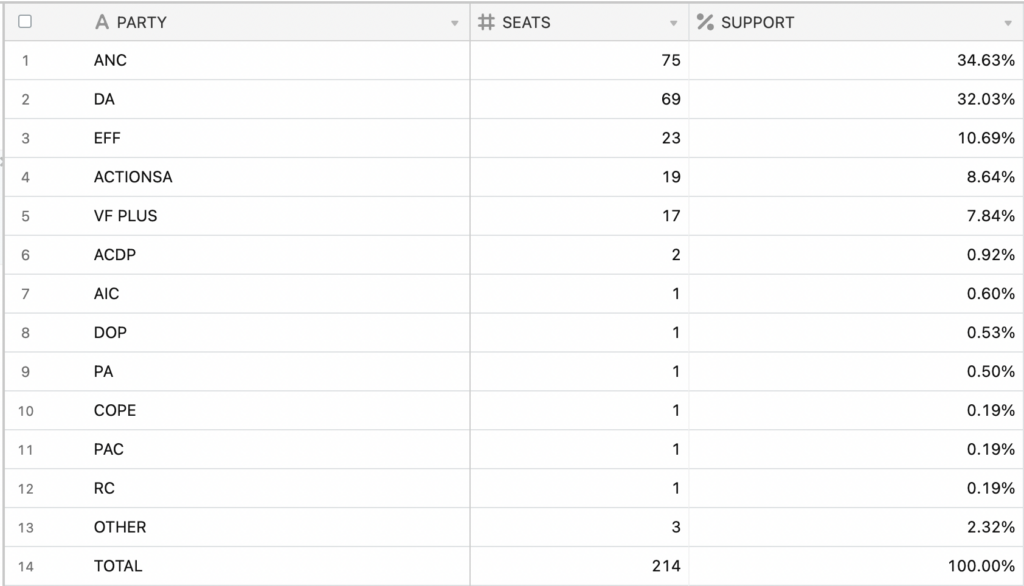 The most likely controlling combination is ANC and EFF. 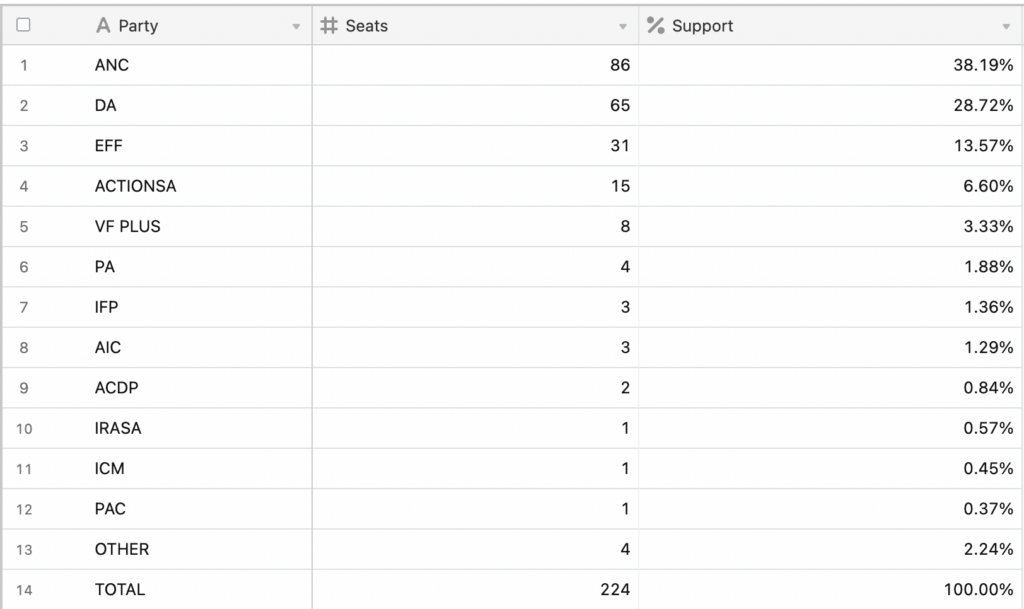 The most likely controlling combination is the ANC and EFF. 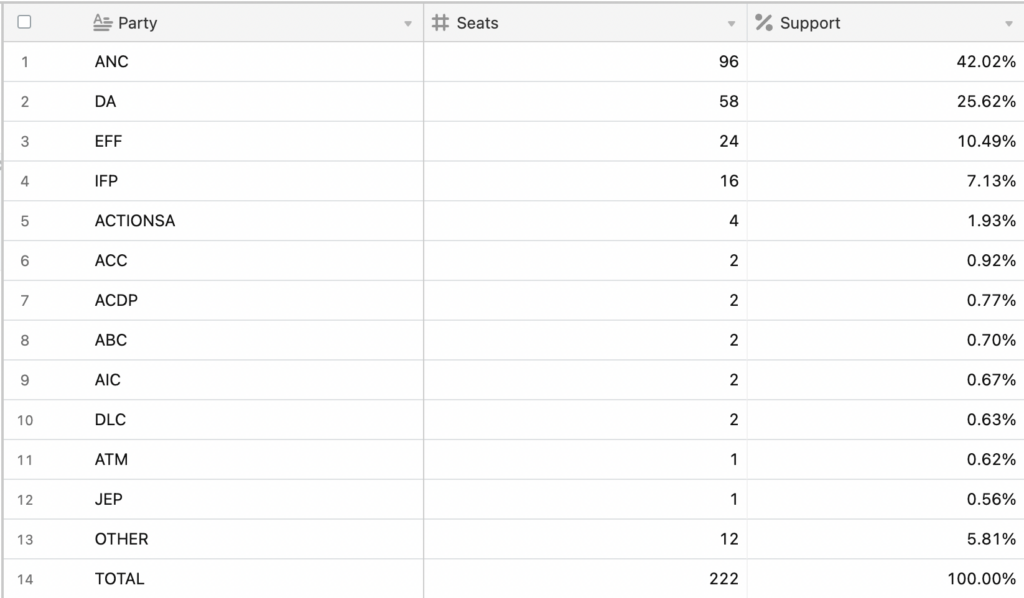 With a deadhead between the DA and the ANC, the key to victory lies with which way the EFF jumps. Each party will require support from smaller parties with a total of 13 seats to secure control – with the EFF’s 8 in their basket, the balance will be relatively to secure. 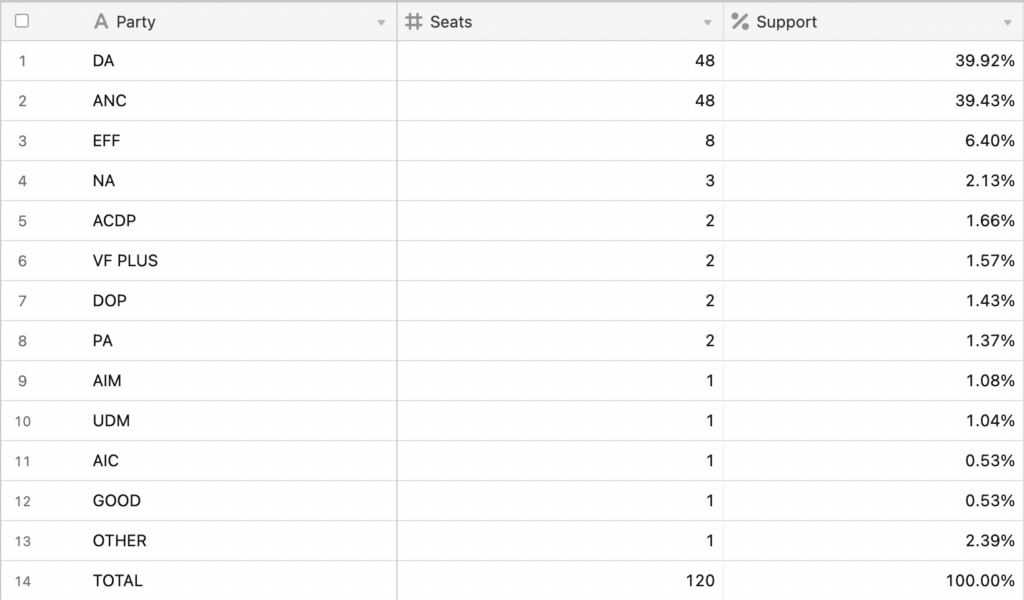 Another key issue of this election was a sharp fall in voter turnout. Final figures from the IEC show there were only slightly less registered voters than in 2016 (see below) but the turnout fell 12 percentage points to 46%. That resulted in a drop from 15.3m to 12m in the number of people who showed up at the polls – a 21% drop (see below).

In the ANC’s case, many of its traditional supporters appear to have elected not to participate, making up the bulk of the 21% lower number at the polls. For the DA, its losses were primarily due to the surge in the popularity of the VF plus and the entry of newcomer Action SA.

This trend is particularly evident in Johannesburg where the DA lost 13 and ANC 12 percentage points and even the EFF down slightly. Newcomers Action SA and the Patriotic Alliance took almost 20% of Joburg’s total votes with 3% shared through a trebling in the share for previously off-the-radar VF Front, ACDP and Al Jama-Ah.

This means with the exception of Cape Town, two major parties will need to forge coalitions in SA’s major metros.

The Democratic Alliance enjoyed a comfortable win in Cape Town, the only big metro where any party achieved control. It also edged the ANC in Nelson Mandela Bay, but lost almost seven percentage points of the votes in a city where coalition politics has had tumultuous results – with more in prospect.

Herman Mashaba’s ActionSA is off to a great start with more than half a million votes in total primarily from the four metros it contested. It did best in Johannesburg where Mashaba himself was the mayoral candidate, with 16% of the vote. It has also done well enough in the other metros it contested to suggest the former Joburg Mayor’s new party will become a force to be reckoned with.

The predicted wave of support to the EFF did not materialise. The IFP, however, made a big comeback, especially in KZN. The DA has also secured a foothold in KZN with its victory in uMngeni (Hilton/Howick/Nottingham Road) and maintained its presence in the Eastern Cape at Kouga and increased its majority in the MidVaal municipality in Gauteng (Meyerton/Walkerville/Eikenhof).

The new Patriotic Alliance has also been a surprise winner in this election and as the ables above suggest, has a strong hand in the negotiations for the new ruling coalitions.

The other party which will be celebrating is VF Plus which doubled its total votes, and because of the lower turnout, trebled its slice of the national pie and an overachievement in Tshwane ensuring it will play a major role in determining the new ruling coalition.