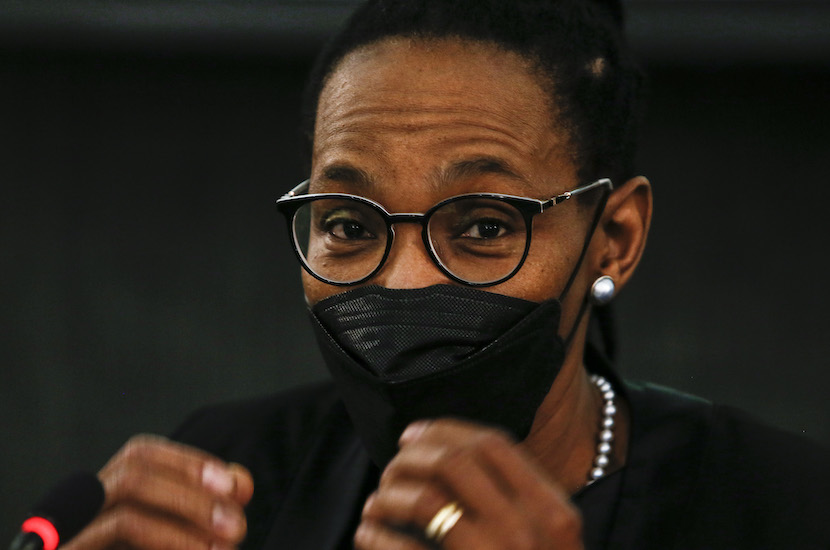 One of the sadder clowns on the judicial service commission asked the now chief justice-elect, Mandisa Maya, whether South Africa was ready for a woman chief justice. She gently but firmly slapped him down (and the concept of tokenism), saying she wasn’t there because she was a woman, but because she was “just a good woman judge”. It’s a subtle but exciting indication of her steely independence and a deep-seated belief in equity, accountability and fairness, all three qualities vital in a country where their opposites are endemic. Unless successfully challenged in court on grounds of procedure and appalling, agenda-rich questioning by the JSC, President Ramaphosa probably has too much on his plate to order a replay. Maya is, on any criteria, a deserving nominee, as a review of her history and judicial track record below reveals. What Ramaphosa may do is order an overhaul of the JSC protocols to prevent it from descending into a circus that just happened to have a decent outcome this time. Story courtesy of The Conversation. – Chris Bateman

South Africa could soon have its first woman Chief Justice: here’s who she is

Mandisa Maya, Judge President of South Africa’s Supreme Court of Appeal, was recently recommended by the country’s Judicial Services Commission to become the next chief justice of the Constitutional Court.

The position became vacant after the 12-year term of Chief Justice Mogoeng Mogoeng ended in October 2021.

It is now up to President Cyril Ramaphosa to decide if she actually ascends to the highest judicial position in the country. This follows what many consider to have been a shambolic selection process.

If appointed, she’ll be the first woman chief justice since South Africa became a constitutional democracy following the end of apartheid in 1994.

Here are some interesting facts you need to know about Judge Maya.

Mandisa Muriel Lindelwa Maya was born in Tsolo, Eastern Cape – one of the country’s poorest areas, which borders the Indian Ocean – in 1964. She has five younger siblings, three children and is married to Dabulamanzi Mlokoti. Both her parents were teachers.

She grew up in King William’s Town and Mthatha where she matriculated (finished high school) from St John’s College, in 1981. The school is one of the oldest – and one of the most highly rated – in the country. It is closely associated with the Anglican Church of South Africa, having been established in 1879 by a Church of England missionary.

Maya’s early childhood was in former Ciskei, one of the four Bantustans or homelands – together with Transkei, Bophuthatswana and Venda – which were granted nominal independence by the apartheid government. They were some of the mainly rural and impoverished areas set aside by the apartheid government where black people exercised nominal ‘self-rule’ along ethnic lines. They offered little opportunity for advancement and upward mobility.

Nevertheless, growing up in a Bantustan did not deter Maya from her commitment to justice and human rights saw her pursuing studies in law. She holds a BProc from the University of Transkei, LLB (University of Natal), and LLM (Duke University, North Carolina in the USA). She is a Fulbright Scholar, was a fellow of Georgetown University law and gender programme as well as a Commonwealth Foundation fellow and a Duke Law School International Alumnus.

Maya began her legal career as an attorney’s clerk in a professional firm in Mthatha. She went on to become court interpreter and prosecutor of the Magistrates’ Court in the town. This was followed by the job of assistant state law adviser before she did her pupillage at the Johannesburg Bar. She subsequently became a practising advocate associated with the Transkei Society of Advocates. Maya also had a stint as a law lecturer at the University of Transkei.

The positions she held before becoming a judge imbued in her values that make her a suitable candidate for chief justice. These include ideals and values of integrity, impartiality, professional ethics and court decorum.

She also has a footprint in other jurisdictions, notably Lesotho, Namibia and US. In Washington DC she was policy counsel and lobbyist intern at the Women’s Legal Defence Fund. She has also acted as a judge in the Supreme Court of Namibia and the Appeal Court of Lesotho.

She has been honoured and acknowledged in the legal profession, including honorary doctorates of law by a number of universities. Her leadership qualities have been recognised in various other ways, too. For example, she was elected the president of the South African Chapter of the International Association of Women Judges.

Highlights on the bench

Her years on the bench, including the current position, have been characterised by the championing of children and women’s rights, the poor, and many other marginalised groups.

In 2012, she received the South African Women Lawyers Icon award for her role in empowering and mentoring women in both the judiciary and the broader legal profession.

“So, while there has been a marked ideological shift in the ways judges adjudicate matters relating to gender-based violence and femicide in recent times, including the abolition of cautionary rule in respect of sexual offences, and the conduct of many judicial officers can be commended, the fate of these victims should not be left to the off-chance that the individual judges hearing their cases will be attuned to the sensitivities. There should be a formalisation and standardisation of these norms so that it is incumbent on the courts to pay particular attention to the treatment of victims in these cases.”

Through her judgments, she has demonstrated comprehensive knowledge of the law and the Constitution. She is also considered a jurisprudential thought leader given that some of her judgments have – directly and indirectly – influenced nation-building.

The matter before the Supreme Court of Appeals was about a claim for damages arising from the rape of a woman by an off-duty policeman. The majority of the court held that the Minister of Safety and Security was not vicariously liable because the policeman committed the rape when he was off-duty. Maya penned a dissenting judgment in which she argued that members of the police services were entrusted with the constitutional role and the responsibility to conduct themselves properly to foster the community’s trust. And that this could not be suspended because a member was off-duty.

If appointed, Maya would have overcome career labyrinths faced by all female judges in South Africa.

She will be exercising responsibility over the establishment and monitoring of norms and standards for the exercise of the judicial functions of all courts in the Republic.

The steeliness with which she would approach the job was reflected in her response to the question: is South Africa ready for a woman chief justice?