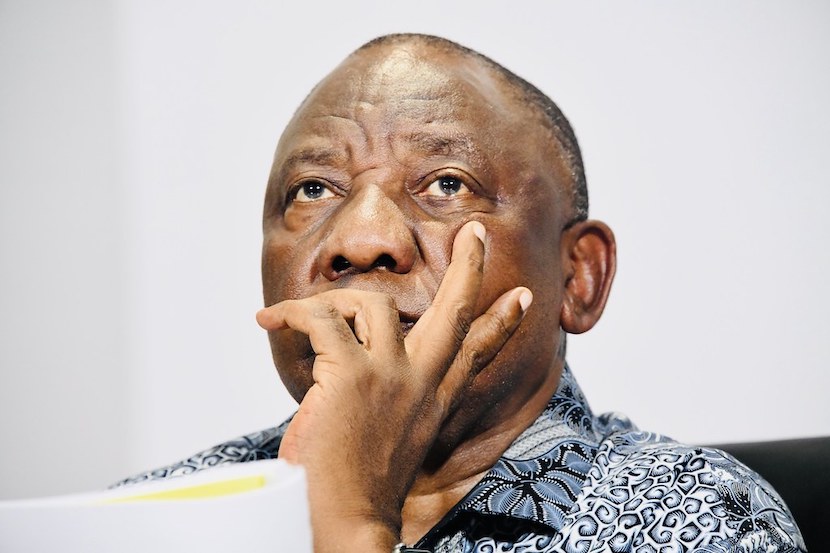 Once again, it’s ‘thanks Comrades – thanks for nothing!” Words that President Cyril Ramaphosa must frequently mumble into his pillow or within earshot of his closest confidantes. This time those comrades, (as usual), had specific agendas, one’s far removed from an objective, job-appropriate approach to interviewing candidates for the hugely influential position of Chief Justice. When an experienced, pragmatic legal mind is applied to the behaviour and the lack of assessment criteria used by the Judicial Services Commission, it’s little wonder Ramaphosa now finds himself between a rock and a hard place. It’s not who they recommended, (though Julius Malema thought he was appointing), but how they did so. Richard Calland, writing in The Conversation, unpacks the circus many of us saw or listened to and couldn’t help realising which panellists had what agendas. A legal challenge based on procedural unlawfulness and woeful chairmanship might well follow. You’d think they’d at least get this one right. – Chris Bateman

After a fraught and fractious week of public interviews that shed heat but little light on the four candidates eligible to become the next Chief Justice, South Africa’s Judicial Service Commission has recommended that President Cyril Ramaphosa appoint Mandisa Maya, who is currently the head of the Supreme Court of Appeal.

Legally, the President should ignore the recommendation. But politically, he probably can’t.

He should ignore the recommendation because the Judicial Service Commission made a number of very serious procedural mistakes that severely undermine the legitimacy and credibility of the appointment process. The commission is a constitutional body responsible for judicial appointments and accountability. It’s composed of a delicate balance of lawyers and politicians.

But, politically, he can’t ignore the recommendation on two grounds. Firstly, it would delay even further a process that’s been extended due to Ramaphosa opting for a wide-ranging consultation and shortlisting process. Secondly, he’d be refusing to accept a recommendation that would result in the appointment of South Africa’s first ever woman Chief Justice.

Ramaphosa is now caught between a rock and hard place.

The mistakes that were made

First of all, the Judicial Service Commission appears to have fundamentally misunderstood its role in the constitutional scheme set out in section 174(3) of the Constitution. It behaved as if it had the power to make the appointment: at one point, Julius Malema prefaced a question to one candidate with the words “if we appoint you…”. He should have been corrected immediately.

In the case of most judges, the President appoints “on the advice” of the Judicial Service Commission. But in the case of the judicial leadership, which includes the Chief Justice and Deputy Chief Justice, the President makes an appointment “after consultation” with the Judicial Service Commission, as well as the leaders of the political parties represented in the National Assembly.

Legally, “after consultation” is a relatively low level of consultation. In essence, the President can simply inform the consultee of his intention and then if they offer a view in response, he should consider the view.

But he is under no obligation to heed it. In the case of the appointment of the Chief Justice the President has a lot of leeway to choose his or her preferred individual.

In any case, the Constitution is silent on how precisely the consultation should happen. But the practice was established in 2011, with the appointment of Chief Justice Mogeong Mogoeng, who was the sole nominee of then President Jacob Zuma, when the commission conducted a testy two day interview of Mogoeng.

This time round the commission was presented with a short list of four candidates by an indecisive President in November last year. It conducted the interviews last week.

But – and this is the second procedural weakness – it did so without any publication or statement about the basis on which it was assessing the candidates. No set of criteria were referred to, because there are none.

This is serious abrogation of responsibility. It is impossible to see how such a body can conduct serious interviews without having a clear view of the qualities that they are looking to assess and test.

It may go some way to explain why the interviews were so erratic and inconsistent. Different candidates were asked very different questions, introducing itself, an element of unfairness.

Thirdly, however, the real injustice of the process was the scandalous questions that were put especially to Maya and Dunstan Mlambo (the Judge President of the Gauteng High Court), and to some extent the current deputy chief justice, Raymond Zondo.

In Maya’s case, she was subjected to a series of thoroughly sexist questions, at least one of which – from Advocate Dali Mpofu – was an example of sexual harassment in plain sight, while most of the others patronisingly failed to fully test her judicial qualities or, for example, her jurisprudential record or judicial philosophy.

The chair of the Judicial Service Commission – deputy president of the Supreme Court of Appeal, Xola Petse – failed to intervene.

Then, in the case of Mlambo, Mpofu was allowed to get away with an even graver breach of process by putting an entirely unsubstantiated “rumour” of sexual harassment to the candidate.

This offended a cardinal principle of law – fair due process, whereby any implicated person gets prior notice of any allegation against them – as well as the established practice of the Judicial Service Commission to not ambush candidates.

It should also be asked whether, and in what circumstances, it is proper for questions relating to alleged misconduct to be put in the absence of an actual complaint.

Again, Petse failed to step in, as he should have. Mpofu must have known that he was breaching Judicial Service Commission practice. As a senior counsel, he should in any case honour the principle of fair due process.

By failing to do so, his intention was apparently to destroy the prospects of the candidate by weaponising sexual harassment – an absolutely scandalous disregard for due process.

It must not go unchallenged. Mpofu must be held to account and disciplined by the relevant professional standards body, which selected him to sit on the Judicial Service Commission. He is not a fit and proper person to do so.

Not the first time

Last year, the Judicial Service Commission was required to repeat an interview process after it bungled a first set of interviews for two vacant positions on the constitutional court.

Now, it – and the country – faces the same possibility. The Helen Suzman Foundation, a think tank, is weighing up its litigation options.

The bottom line is that the Judicial Service Commission’s behaviour can no longer be tolerated. It needs to be challenged, and the courts given the opportunity to provide legal and constitutional guidance.

The composition of the commission is well-conceived. It is a careful blend of legal expertise and interest groups on the one side, with elected representatives on the other. This provides an additional layer of legitimacy to the appointment of judges, who in a constitutional democracy hold significant power and authority.

The constitutional design is not the problem, it is the way in which members of the commission are conducting themselves.

Between a rock and a hard place

A delay of the appointment is far from ideal.

Inexplicably, the President dawdled in making his nomination for the new Chief Justice. This was despite the fact that it has been known for several years that Mogoeng Mogoeng’s term was coming to an end in October last year.

Ramaphosa could have given careful prior thought to the matter and in, say, July published his nomination. The Judicial Service Commission would have had plenty of time to conduct the public interview process.

Typically, when faced by a difficult or delicate decision Ramaphosa opted for an elaborate and elongated process of long-listing, wider consultation, and then short-listing. This played straight into the hands of those on the Judicial Service Commission who wanted to torpedo the candidates that they consider as either politically favourable to the President – although there is no evidence of any such bias – or to mess with the process so as to delegitimise the appointment, which is precisely what has now transpired.

The egregious failures in process by the Judicial Service Commission have muddied the water, obscured the substantive issues relating to the merits of the respective candidates, and complicated Ramaphosa’s decision-making.

Constitutionally, he should reject the approach taken by the Judicial Service Commission and its recommendation – not because of anything to do with the individual, Judge Maya, but because simply to accept its recommendation would be to acquiesce to the procedural unlawfulness perpetrated.

And, given the procedural flaws, the public cannot be confident of the relative strengths and weaknesses of the different candidates were properly explored. At the very least, the Judicial Service Commission should now publish a report that explains the basis of its reasoning and conclusion.

Yet, for Ramaphosa to appoint one of the other three candidates will create enormous political controversy, not least because his critics will be quick to accuse him of rejecting the one woman candidate and thereby missing the opportunity to appoint the first female Chief Justice in South African history.

A legal challenge may well have merit – substantively, given the grave flaws in process as well the injustices caused to the candidates. But politically, the Judicial Service Commission has put Ramaphosa in a very difficult position and he now faces an even more awkward decision in which he will be damned if he does and damned if he doesn’t.

Statement on the JSC’s Interviews for Chief Justice

Protest at the degraded process that was the Judicial Service Commission’s (JSC) recent interviews for the Chief Justice position has been unscrupulously represented as opposition to the possible appointment of Justice Mandisa Maya as Chief Justice.

This is not true. It bears repeating that all four candidates are jurists of distinction and we at the Helen Suzman Foundation (HSF) recognise that the path to this point for Justice Maya in particular – as a woman in a notoriously sexist profession – must have been harder still than for her male counterparts.

But none of the candidates were served by a corrupted process. And those in whose service the JSC’s powers are required to be exercised – the South African public – were spectacularly let down.

Far from being able to observe a process intended to probe the fitness and suitability of the four judges for position at the helm of the judiciary, the public was instead subjected to a spectacle that was both irrational and unfair. For example:

It has been noted by many that the JSC’s recent interview process is an unprecedented one. The Constitution affords the President the power to appoint the Chief Justice of this country, having consulted with the JSC and leaders of parties in the National Assembly. The President’s establishment of this recent elaborate process was presumably in order to enhance the exercise of his powers to appoint the next Chief Justice. But far from enhancing the exercise of his powers, regard for last week’s interviews and the conduct demonstrated there can only detract from the authority of his decision.

Moreover, whoever is appointed Chief Justice as a result of a process of which these interviews form part will be handed a poisoned chalice.  The debasement of the interview process, the abuse of the JSC’s powers and role, the shameful conduct of certain JSC commissioners means that whoever assumes the post of Chief Justice would begin her or his tenure denied the full confidence of the public.