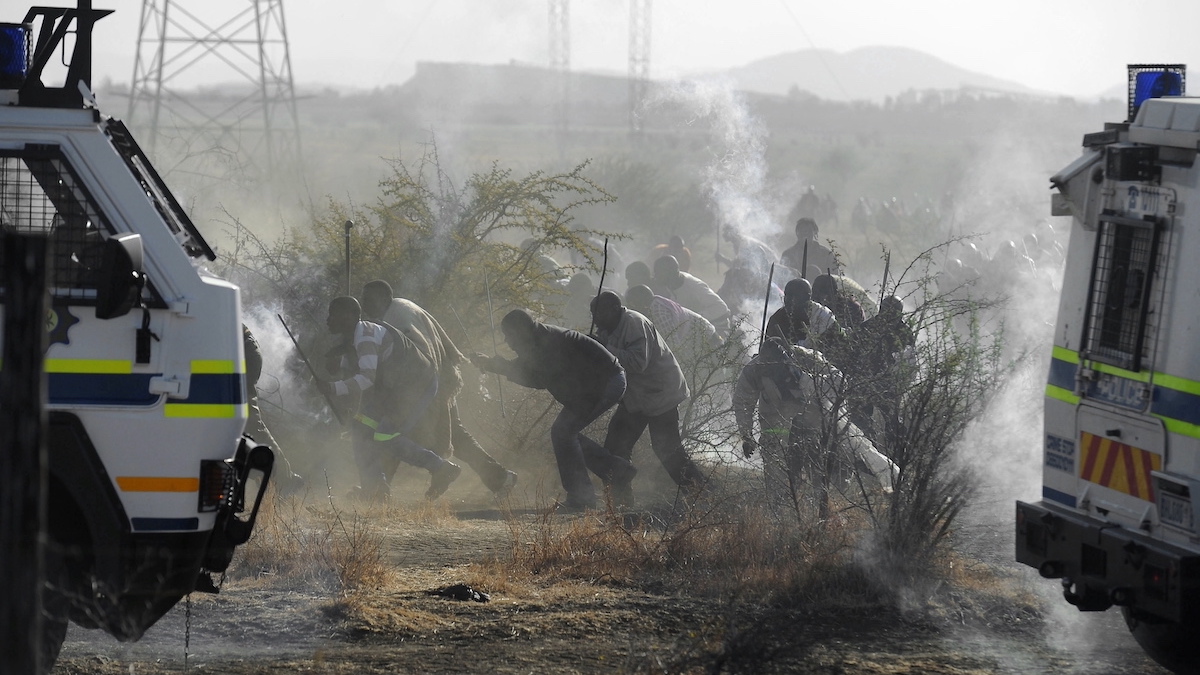 It’s 10 years today since the tragic Marikana Massacre took place, in which 34 Lonmin mine workers were shot dead by police during a tense protest ostensibly over improved wages. According to journalist Greg Marinovich, who visited the site at the time, some of the miners killed on 16 August appear to have been shot at close range or crushed by police vehicles. He claimed they were not caught in a fusillade of gunfire from police defending themselves, as the official account would have it. Another view is that the initially unprotected strike by Lonmin rock-drill operators had quickly turned into a well organised community protest. Statistics obtained on the people who died on 16 August 2012, people treated for injuries and those arrested, revealed that almost a third of the protest participants were not Lonmin employees, according to the Marikana Report compiled by Judge Farlam. Below is an article by Solidarity’s Gideon du Plessis published on BizNews in 2015 which fleshes out some of the pertinent details. – Sandra Laurence

A closer scrutiny of the comprehensive Farlam Report on the Marikana incident reveals two deficiencies.

In the first place, I think the Farlam Commission is mistaken in its argument that the police offensive of 16 August 2012 took place a day too early because of flaws in their tactical plan. Forceful action was actually a week overdue, in my opinion. As in the case of the recent Mamelodi uprising where aggrieved taxi drivers destroyed Autopax buses and where innocent people were attacked, so the Marikana incident too had been preceded by a similar unlawful gathering in which some people violated the Riotous Assemblies Act, without any immediate consequences for them.

In the Marikana case, the first unlawful gathering which managed to go ahead unchallenged on 9 August 2012 aroused the strikers to exchange their sticks and knobkieries for lethal murder weapons by late afternoon on 10 August 2012 and they started attacking Lonmin workers with pangas and machetes. In that way the Dangerous Weapons Act was violated on day two and onwards, without the offenders suffering any consequence for their wrongdoing. In both cases (Marikana and Mamelodi) the question that arose afterwards was, to what extent should a law be transgressed before the authorities take action? It is so symptomatic of what has become the norm, namely that a serious breach of law must first of all be broadcasted in the public media, or reach crisis proportions, before attempts were made to restore the supreme authority of the rule of law.

Fortunately, in the Marikana Report, Justice Farlam came out very strongly against the violence of the protest action; yet, in the same way, the five months’ Amcu platinum strike in 2014 had also been characterised by unprecedented levels of violence and the intimidation of innocent people, as a direct consequence of the Marikana violence. After so much blame had been laid on the police immediately following the Marikana incident, it is understandable that the police, during the platinum strike and the recent Mamelodi bus violence, initially chose to watch the situation from a distance. Justice Farlam therefore missed an opportunity in this case to empower the police, and even the defence force, to follow a zero-tolerance approach to law infringements. (Thanks to zero tolerance, Rudy Giuliani, then mayor of New York, was indeed able to check the crime wave in New York during the nineties.) The second gap in the report was withholding the fact that the initially unprotected strike by Lonmin rock-drill operators had quickly turned into a well organised community protest action. Statistics obtained on the people who died on 16 August 2012; people treated for injuries; and those arrested, revealed that almost a third of the protest participants were not Lonmin employees, or even mineworkers. A week after the Marikana incident, when the protesters had to nominate delegates to negotiate about their grievances with Lonmin, several interested institutions and the recognised Lonmin trade unions, nine persons were deputed, not one of whom was a Lonmin employee. At the instigation of Lonmin, those delegates were replaced by a new group consisting of Lonmin employees; however, the people concerned battled for three days to formulate their grievances. The R4,000 apparently earned by rockdrill operators, the demand that all workers should earn at least R12,500 a month as well as housing issues were later put on the table, thanks to Amcu. At the time Solidarity was in possession of some Lonmin rockdrill operators’ payslips which showed that employees who exceeded their daily drilling targets earned up to R18,000 a month.

Solidarity confronted Lonmin’s executive about the company’s poor public relations because it had not been disclosed that more than just a Lonmin issue had been at stake; that the rockdrill operators were in fact earning far more than R4 000 a month, as widely publicised in the media already at that stage; and moreover, that Solidarity discovered Lonmin and other mining houses had paid hundreds of millions of rand to local government entities for infrastructure development – but that the money had disappeared. In its reply to Solidarity, the company stated that its London head office had issued instructions that Lonmin should withhold anything which might offend or embarrass the governing party.

Lonmin is not quite so blameless, however, because, underlying the protest action was the housing frustrations of employees and members of the community that boiled over. Solidarity already warned Lonmin by the end of 2008 that the company did not comply with the requirements of its own Social and Labour Plan (SLP) to build 5 500 houses in the area. The content of the SLP of a mine house, which is submitted to the Department of Mineral Resources together with an application for a mining licence, determines the issuing of a mining licence. In its reply, Lonmin requested Solidarity to keep the issue under wraps; if the company were to live up to its SLP promise, up to 1 500 workers would have had to be retrenched to cover the housing cost. The rest is history.

Except for a few paucities in the report, Justice Farlam made some significant recommendations and quitted himself well in offering the parties concerned the opportunity to present their versions of the tragedy. Of prime importance now is that the suggestions to curb violent strikes be attended to as a matter of urgency. Gold and coal mine negotiations are heading for a strike, and another incidence of aggrieved workers intimidating innocent people – pushing the wobbling South African mining industry yet again into the international arena for all the wrong reasons – must definitely be prevented.