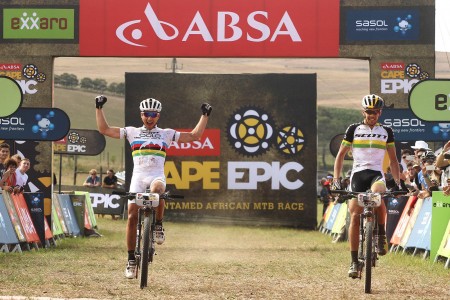 It’s fantastic when a very popular event such as the Absa Cape Epic decides to have the same prize money for men and women. I promised myself many years ago that I wouldn’t participate in leading marathon races where the prize purse for men and women weren’t equal.  (World Marathon Champion, Gunn-Rita Dahle Flesjå)

The ABSA Cape Epic (ACE) for 2014 is history.  By all accounts it seems to have been a great success.  Well done to all participants, supporters, sponsors and the organisers.  A powerful measure of success is how the market responds.  Here is an indicator.  When 100 of the 600-odd entries for 2015 were offered for sale a day after the 2014 event, they were snapped up in seconds, at a snip of R53 700 per team.  One wonders what price the market can bear on this event.

Apart from the lists of winners and finishers, outcasts and ‘DNFs’ that are written into mountain bike history, there was another significant historical event, the equalising of prize money for both genders.

In a world with wall-to-wall political (and gender) correctness, this is supposedly, the right thing to do.  Surely equal pay or reward for equal output or outcome is what the Twenty First Century expects of civilised, respectful and fair societies?  As reflected in Section 9 of the South African Constitution, which we so like to offer as the smartest bits of paper ever, there should be no discrimination on the basis of any characteristic that we inherit – including gender, race, age, disability – oh, and some choices we make such as religion, culture, belief and so forth.

Sadly, I was not a participant this year.  I am hoping for a benefactor for 2015.  The best it got for me was to follow the daily results on the ACE website and a highlights package at 22H30 on a television sports channel.  On Monday I examined the final set of results with great interest.  When I looked past the names and the personalities, I found a second set of numbers that piqued my curiosity.

Firstly, there are the numbers that determine how demanding a mountain bike (MTB) event is.  Trust me, the 2014 ACE was tough.  Here are some of the data; just about 720km over eight days, and almost 15 000 meters of ascending.  Yep, these folk rode and walked up almost twice the altitude of Everest (8 848m).  The rough terrain and inclement weather exacerbated the going too.  Ask the former road cyclists; tar is 30% to 50% easier than loose, rocky and washed out 20% gradients, or similar descents.

Then there is the financial side of things.  There was R700 000 for each gender group on offer.  This was further split into age and region categories, and stage and ‘hotspot’ winners.  In summary, the first ladies’ team waltzed away with R275 000 and the first team overall pocketed R205 000.  The difference between the two winners is made up of stage wins and ‘hotspot’ wins.  The winning ladies won six stages and three ‘hotspots’, the general classification (overall winners), one stage only, thus the R70 000 difference.  The overall winning team happens to be a male team.

Here is the rub.  The ladies had to beat 22 other teams to gather ‘hotspot’ rewards (R15 000), stage wins, (R5 000) and the overall victory.  The overall winners in contrast had to beat 618 teams, including the ladies teams.  In the general (overall) classification the ladies came 23rd out of 522 finishers, but still collected R200 000 for the win.

The fact that one ladies team collected 92% of the possible ladies prize-money suggests that they may be worth their prize money.  Or, it may suggest that it is a lot easier to be #1 out of 23 than #1 out of 619, and that the level of competition is vastly different between, essentially the ladies and everyone else.  A one-horse race is not really a race, I would imagine.

Furthermore, the only age category offered no prize money were the Grand Masters (50 years and older), despite beating the ladies team by eight places, almost an hour and with double the number of participants in the age group.

So, seems to me that equal is not equal, depending on what diversity criteria are selected.  Ladies are given a massive advantage.  If you are male, and the older you get, the more you are disadvantaged.

Perhaps the organiser and sponsors will argue that the prize money is applied as an incentive for the best (female and younger) mountain bikers to trek to the tip of Africa, and to develop the sport amongst ladies.  The other point that may be made is how the top ladies train as hard and make as much effort as the top men, and should be suitably rewarded.  Outcome is not the issue here, it seems.

On the final day I watched two riders crest a steep muddy incline, without bikes.  The one team member had pushed both bikes to the top of the hill, and then walked down to collect his team mate who he pushed and pulled to the top.  They were beaten and broken, but determinedly mounted their bikes and headed down the hill.  I did not get their team number, but they could have been the team called, “Not so Fit Buddies”.  If anyone deserves a prize, it is them.

Perhaps there is a smarter way to equalise capability, effort, outcome and reward.  I reckon I may have one.