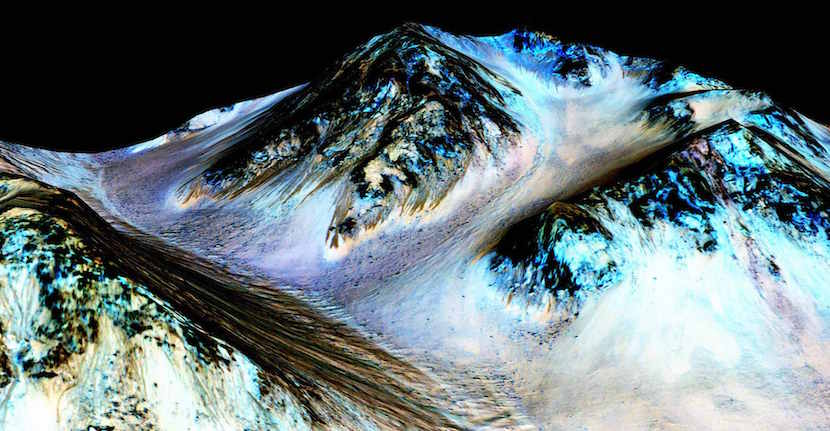 (Bloomberg) — The holy grail of space exploration is to find extraterrestrial life. An important precursor to that is finding liquid water – and that’s exactly what NASA today announced scientists have discovered on Mars.

NASA has confirmed that liquid water flows on Mars, increasing possibility of life.

The findings, which are described in the journal Nature Geoscience, offer an explanation for peculiar, long streaks that sometimes appear on sloping Martian terrain. The dark features, which can reach 5 meters wide and more than 100 meters long, were first noticed in 2010. By analyzing their reflected light signature, a team of eight scientists has concluded that the streaks consist of mineral salts that easily absorb moisture – and that flowing water is the likeliest explanation for their appearance.

The Red Planet has been known for years to have ice, and its surface bears the topographical scars of ancient water flow. This latest research, though, is the first to provide compelling evidence for the ongoing existence of flowing water on Mars.

Britain would be 52% more interested in Mars if it had flowing tea.

The findings date back to 2010, when Lujendra Ojha, then a University of Arizona undergraduate and now the lead author on this new research, started sifting through images from a powerful NASAcamera orbiting the Red Planet. His professor, Alfred McEwen, is another co-author on the research and the camera’s lead scientist for NASA. “There were these stark, linear, narrow features forming” all over the planet, Ojha said, “and they were only forming when the temperature was ideal for liquid water.” In the Martian winter, the features, called “recurring slope lineae,” disappeared. Another instrument, called the Compact Reconnaissance Imaging Spectrometer for Mars, or CRISM, records the wavelengths of light reflecting off Mars’s surface. Scientists use CRISM to collect light spectra, match them to the known light signatures of minerals, and then conclude, for example, what soil might be made of on another planet.

Now a graduate student at the Georgia Institute of Technology, Ojha began looking at the CRISM data for Mars’s sloping streaks at the end of last year, unpacking pixel after pixel. Using these images, he and his colleagues confirmed what they had already suspected the presence of salts called perchlorates that are terrific at absorbing water. The significance of the finding goes beyond scientists’ usual glee at the discovery of anything Earth-like in the heavens. Liquid water is a necessary precursor to life. So if Mars has water, it might also … Well, don’t go there just yet.

The new images don’t actually show flowing water, which doesn’t last long on the Martian surface. It evaporates quickly, and the thin atmosphere wicks it up and away. The orbiter collects its data at about 3 p.m. Mars time. That’s a bad time for watching water, because the relative humidity is so low. Eight hours earlier or later, the scientists may have caught the water itself, Ojha said.

Instead, what’s left are these patches of freshly hydrated salts, which bond with molecular water whenever it’s around, leaving dark streaks. That’s what Ojha and colleagues see in the images, and how they know there’s water on Mars. It’s locked in these salts, and couldn’t be there without some recent influx.

The ultimate question, whether Mars can host living things, belongs squarely to astrobiology, the study of life’s origins.

Toward the end of their new paper, Ojha, McEwen, and their co-authors say that the conditions on Mars – arid and salt- rich – are similar in some ways to the Atacama Desert in western Latin America. There, water-retaining salt beds provide an oasis for microbes. Unfortunately for E.T.-hunters, on Mars “the water activity in perchlorate solutions may be too low to support known terrestrial life,” the authors wrote.

I’m trying to get excited by the discovery of water on Mars. I wish they found it in California.

There’s an irony in searching for life-friendly conditions on Mars, or elsewhere. The more promising the discovery, the more thoughtful humans (or our robots) should be in approaching it. Areas where life might propagate are declared “special regions” and treated with caution by scientists. That’s because virtually everything on Earth – your smartphone, the doorbell, bananas, yesterday’s socks, spacecraft—is slathered with microbes. NASA has an entire Office of Planetary Protection to ensure that the search for extraterrestrial life doesn’t turn up expat terrestrial life.

“Maybe in the future we can have a mission to go there,” Ojha said, “but I think we have to be really careful about transferring of life from Earth to Mars. We might be the ones creating the second Genesis.”