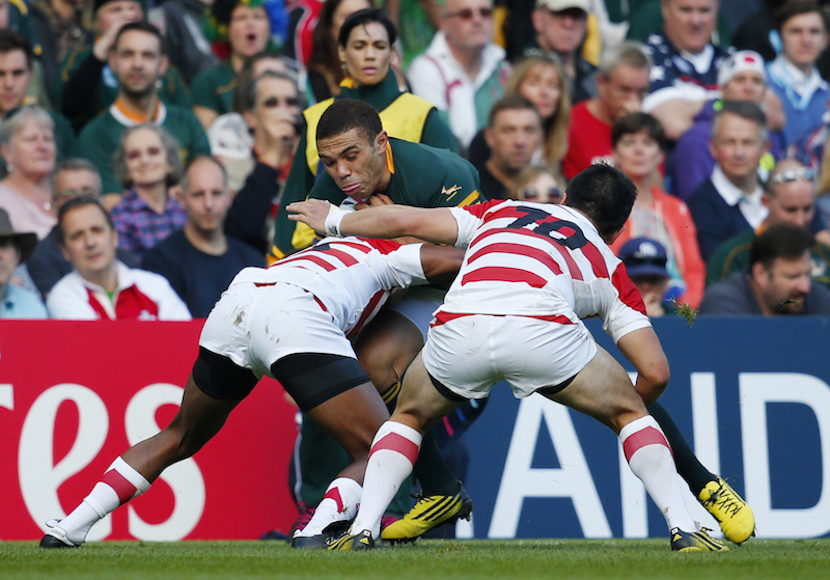 Deon Gouws is an investment professional who is more than a little passionate for sport. He is a South African living in London and follows the Springboks at every opportunity. He set passion aside for a moment and applied an extremely analytical mind to the way fans are riding the rollercoaster in their assessment of how likely SA is to get its collective hands onto the Rugby World Cup. His piece was extremely well read on Biznews, as he reckons those with green blood are acting like lemmings. But as they say, you attack a Springbok you attack a nation and Biznews community member Frans Krause compiled a fairly direct yet canny response. He says Deon is a friend of his son so it’s all part of the fun. Frans takes the conspiracy route and says the Japanese loss was all part of the greater plan. Firstly it got the ‘Brave Blossoms’ coach Eddie Jones to sign up with the Western Stormers. Secondly, it was a carefully devised plan of deception on the All Blacks and Aussies on the Springboks path to World Cup glory. Whether or not he’s correct, only time will tell. But both seem to have written off the Welsh, which is a cardinal sin in any form of sport (rewind to Japan), so as a Springbok fan let’s get past this hurdle on Saturday first. – Stuart Lowman

Deon Gouws has probably spent far too much time in London to be an authority on Springbok rugby. He is probably more of an authority on cricket, evidenced by his, by now Africana, publication “… and nothing but the truth?” I see I actually have two copies, both signed by the author, should by now be worth a pretty penny.

Does he really think the Bokke could not beat Japan in the opening game of RWC 2015. It was a carefully devised plan of deception on the All Blacks and the Aussies. Whether there was money involved needs to be seen. I doubt that a commission of enquiry will be appointed or yield the required results. If indeed a commission is appointed to investigate the Hitachi allegations it will be more efficient to merely extend the terms of reference to include the game against Japan, in that way the heat can be taken off the real issue.

The plan, apart from deception, was also to give Japan confidence to win a further two games and qualification for the RWC 2019. It is rather messy to have the host nation go through the qualifying process, not making it and having to sacrifice another team to let the host nation play in their own RWC. Japan would have had to qualify without Eddie Jones, probably unlikely. Eddie Jones? Click, I do not believe it, did the ex Bokke captain sacrifice the game against Japan to secure the services of Eddie Jones for the Stormers!

Provincialism!! The root of all evil, a Bull would never stoop that low. This better not come to the attention of the coach. The rest of the theory has not been compromised.

It is believed, coming from most unreliable sources, that Homo Naledi was also a very well thought-out strategy. The strategy being to play the Homo Naledi’s hard until injury side-lines them, bound to happen to old bones, and then the coach may proceed to select and play the best team without a word from the politicians or supporters. The problem, again from Japan, was that the retreated scrumhalf did not buy into this plan and is playing his best rugby ever. The promotion to captain is just reward for refusing to be part of such underhand strategy. The Bok captain will be even better in the knock-out phase of the RWC, if you are a shy non-talker you simply have to lead by example. Go Bokke Go!!

Deon Gouws should come to South Africa to be taught the finer points of rugby. It is out of the question for anybody to go over to London with the ZAR where it currently stands.

Deon Gouws still owes me a beer, preferable a Castle and not one of those hostile take-over beers. This will be more like a dozen if bought in South Africa against London prices.